To test the Arctis 7, I used it as my go-to device for all my audio needs. This meant I used it while playing games, watching videos and listening to music. 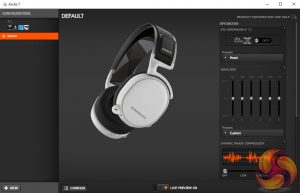 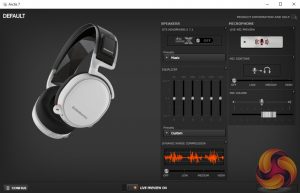 As you can see, all of the controls can be accessed on one page. There is the option to set different profiles, accessed via the small tab on the left-hand side of the page, but this can be collapsed if you don’t want to use different profiles.

Essentially, the rest of the software is quite basic but covers most of the areas we would expect. Aside from a 7.1 surround-sound toggle, there is a small adjustable EQ, as well as an option for dynamic compression and mic sidetone. I didn’t find myself using the software much, but it definitely worth having for the extra control it gives.

With that out of the way, let’s talk about the audio quality.

As I mentioned at the top of this page, I used the Arctis 7 for across a range of scenarios, and overall I must say the quality is very good for a gaming headset.

The overall sound is quite well balanced, with just a hint of emphasis on the bass and mid-range frequencies. This made listening to music quite enjoyable, with the slightly warm sound creating a lovely environment for vocals and acoustic music.

The Arctis 7 also excels when gaming. In-game speech is clear and easy to comprehend, while the punchy bass also ensures gunfire and explosions have enough impact to get you immersed and get the headset rocking.

I did try out the virtual 7.1 solution and it definitely increases the overall soundstage somewhat – in-game audio sounds more expansive and you get a bit more directional feedback when compared to stereo gaming. However, I also found the virtual 7.1 resulted in a slight loss of detail, and speech in particularly just sounds a bit washed-out with surround enabled.

Talking of speech, though, the Arctis 7 has one of the best gaming headset microphones I have come across. It sounds really clear and natural, with only the slightest hint of the nasally effect which plagues other gaming headsets. The mic being retractable is also very handy as you can store it out-of-sight when not in use, and you won’t lose it either – as has been known to happen with detachable mics I’ve used previously…

My favourite feature by far, though, is the ChatMix dial. I’ll take my time to explain this feature as it can be a bit confusing initially, but it is frankly brilliant.

So, to explain ChatMix: when first setting up the Arctis 7, users will notice there are two entries in their playback devices – Arctis 7 Game, and Arctis 7 Chat. You will want to make sure the Game entry is set as ‘default device’, and the Chat entry should be set as ‘default communications device’.

This is because, by splitting those two channels up – audio and communications – SteelSeries can then allow you to fade between them via the ChatMix on-ear volume wheel. So essentially, in-game, you can adjust the ChatMix volume wheel to make either the communication or general audio louder, at the expense of the other. Simply put, it lets you ‘balance’ the two audio sources to a level you are happy with, where you can hear both your game and your friends chatting as well.

In my opinion, this is a simply brilliant idea. I know personally, when chatting using Skype for instance, there have been many occasions where I have had to drop my in-game master volume down to as low as 10% to be able to hear my friends talking in the background. With ChatMix, the simple on-ear volume wheel does it all for you, and I really love it.

Another thing to discuss is battery life. As the Arctis 7 is wireless, it does need charging, and SteelSeries advertises a 15-hour battery life from a full charge. In my experience, that is about right – I used it at around 50-60% volume for a couple of hours a day, and the battery lasted me about a week. I think that’s impressive in its own right, but even better is the fact that you can charge the battery (via micro-USB cable) while using the headset, or use the 3.5mm jack cable and not need the battery to be charged at all – so there’ll never come a time when you have to stop listening.

However, I must talk about comfort before moving on. Here I am sad to say I did not get on with the Arctis 7 at all, for one simple reason – I found my ears pressed right against the ear cup drivers, instead of being cushioned by the ear cups themselves. This meant I could only use the headset for about 45 minutes at a time, as otherwise my ears would feel pinched and they would get very warm.

I wouldn’t say I have particularly wide or oddly-shaped ears, either, so it just seems like a design flaw to me. Other people online have also reported similar problems so it definitely isn’t just me.

That Reddit thread does suggest getting a pair of the alternate ear cushions (velour or leatherette options are available for £11.99 plus postage from steelseries.com) but sadly I wasn’t able to get a hold of any extra cushions to verify this. Honestly, I would have expected a second pair in the box – without having to pay more –  considering the price of the headset. The HyperX Cloud II manages to do this, and a pair of those are significantly cheaper.