PlayStation gave the PlayStation Now Streaming service a soft relaunch last month, where it cut the price of the service significantly as well as introduced blockbuster titles such as God of War (2018) and GTA V on a monthly basis. The list of high quality titles continues with November’s lineup: Persona 5, Middle-Earth: Shadow of War and Hollow Knight.

Persona 5 was the highest rated PlayStation 4 game in 2017. This 100+ hour turn-based JRPG takes everything that made Persona 4 great, and perfects it. With an engrossing story, featuring twists and turns; likeable characters, each with their own interesting subplot; a funky soundtrack; and possibly one of the most stylish art styles of any game, Persona 5 is certainly a title worth checking out.

Middle-Earth: Shadow of War is the sequel to one of 2014’s best action-adventure games. Released in 2017, the sequel featured a refinement of the Nemesis system which it introduced in the first game. The Nemesis system gave enemies much greater depth, and instilled a sense of rivalry, separate from the main story itself. While the game was mired with controversy for its inclusion of intrusive microtransactions which impeded on the progression of the story itself, Warner Bros. later removed them, meaning that playing the game now would give you the best experience possible. 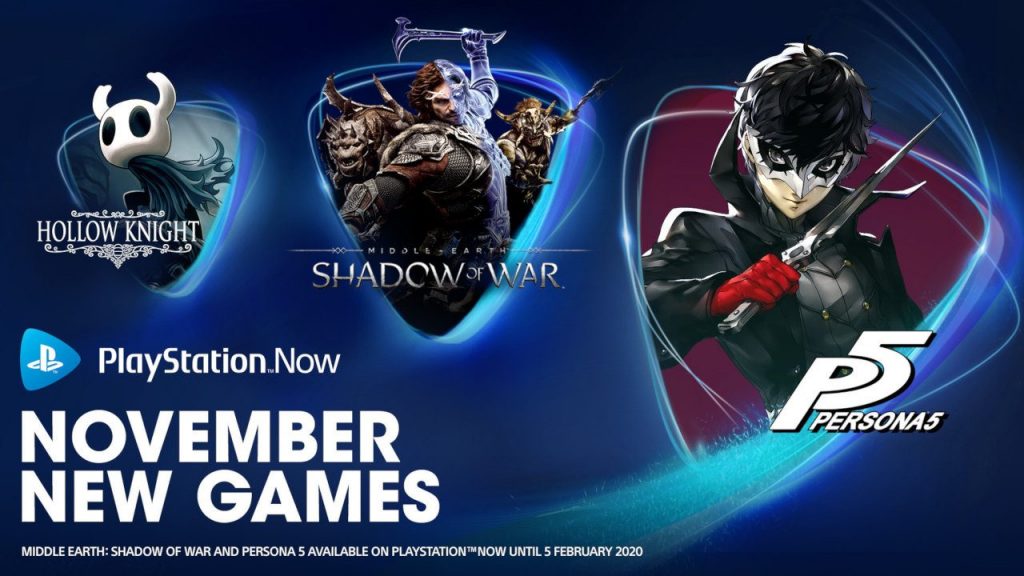 Hollow Knight is a 2D metroidvania, originally releasing in 2017 on PC, but later arrived on consoles in 2018. Featuring a unique art style, Hollow Knight is “[t]he award winning action adventure of insects and heroes. Explore twisting caverns, ancient cities and deadly wastes. Battle tainted creatures and befriend bizarre bugs. Uncover ancient history and solve the mysteries buried at the kingdom’s heart” explains the PlayStation blog post. The game is currently awaiting its sequel ‘Hollow Knight: Silksong’, so there is no better time to familiarise yourself with the franchise.

Persona 5 and Middle-Earth: Shadow of War will be available to stream and download from now until the 4th of February 2020. Hollow Knight meanwhile will be a permanent addition to the service. These games will be joining the hundreds of games already available on the service.

kitGuru says: What do you think of this month’s additions? Do you appreciate the new direction PlayStation has chosen to take the PS Now service? Has the recent price drop made you consider subscribing to PS Now? Let us know down below.