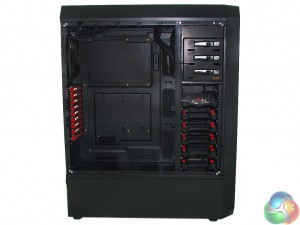 Removing the main side cover is a simple matter of removing two thumb screws, hinging the cover outwards and lifting it away. You’ll have a bit of a shock as the panel is rather heavy thanks to the use of dual layer construction to reduce noise levels.

In this respect the Nineteen Hundred is a glowing success as the case feels utterly solid and has no panel flex worth talking about. 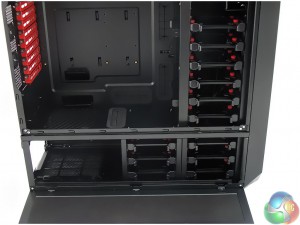 The lower compartment has a cover on either side that is released with a button. Pop the button and the steel cover drops down.

Or, as I found, touch the button when you are moving the case a little carelessly and the cover will drop like a baby guillotine. Behind the covers you’ll find the primary location for the power supply along with six 3.5-inch drive bays. 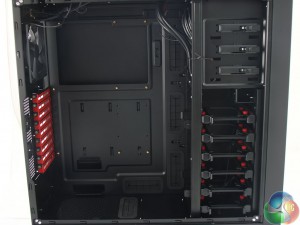 At the front of the case there are six 3.5-inch drive bays, two 2.5-inch bays and the three 5.25-inch optical drive bays.

Antec states the Nineteen Hundred can accommodate graphics cards up to 330mm in length. I had no problem installing a pair of Sapphire Radeon Tri-X R9 290 4GB monsters that each measure 300 mm.

I imagine most people building a PC into this case will use a liquid cooler but I wanted to check the claim that you can use a CPU cooler up to 175mm in height. As you will see in the photos that come later a Noctua NH-U12S cooler that stands about 160mm tall vanished inside the case without any difficulty. 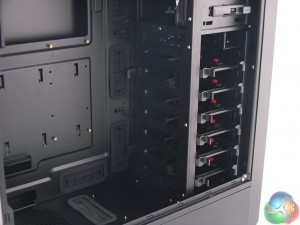 Antec supplies six 120mm FDB (Fluid Dynamic Bearing) fans with this case (three at the front, two in the roof and one at the rear) and you also get mounts for two more 120mm fans that clip behind the main tower of 3.5-inch drive bays.

My advice is to forget about these mounts as a) the case cools beautifully and b) the natural location for any drives is out of sight in the lower compartment. 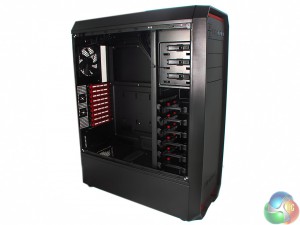 You may have noticed the red colour scheme used on the ventilation mesh on the front panel, the silicon isolation bobbins on the drive caddies and the expansion slot blanking plates. In fact the Antec Nineteen Hundred comes in two colour options where the case is mainly black and the highlights are either green or red.

Clearly this is a nod to the gaming theme where you select your case to favour either AMD (red) or nVidia (green). I feel guilty when I confess that the pair of Sapphire graphics cards I used for the build are orange in colour and ruin Antec’s cunning plan.

On the front of the case you’ll find the flush Power and Reset buttons that form part of the panel. They operate with a noticeable click but are not especially easy to find by feel alone.

The upper Power button has its flexure on the left while the lower Reset button is the opposite way round. I think I have used the word flexure correctly but you are welcome to put me straight. Next to the buttons we have two USB 2.0 ports, the audio jacks for your headset and then you get four USB 3.0 ports.

There’s a good chance your motherboard only has one USB 3.0 header but Antec has thought of that and has used cables that can connect to either a USB 3.0 or USB 2.0 header.

Note the red mesh that allows air to flow through the front panel with the minimum of noise and dust. When the system is running blue LEDs are visible through the perforated front panel that show power and disk activity. 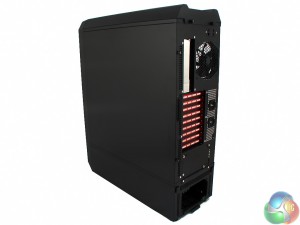 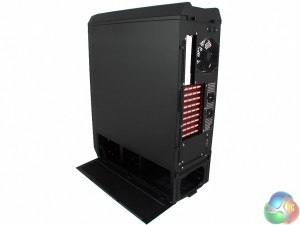 Turning to the left side of the case, I found the side cover was slightly more awkward to remove than the windowed cover on the right. 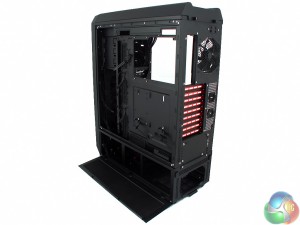 Instead of hinging outwards I found the cover required a bit of a pull to the rear and then it came free and dropped sharply. These panels are fairly weighty and the corners can make an impressive ding in the surface of your table top or work bench. 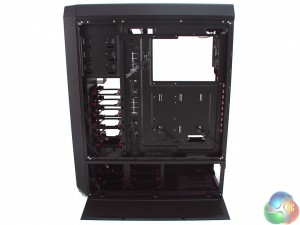 With the cover removed you can see there is plenty of working room and some 25mm of space behind the motherboard tray for routing your cables. 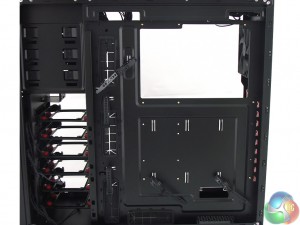 This close-up shows the enormous motherboard cut-out which measures 215mm x 150mm. Changing your CPU cooler has never been easier. Despite the large expanse of fresh air the tray is impressively solid and doesn’t flex or wobble. 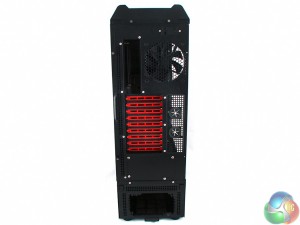 Take a close look below the red expansion slots on the rear of the case and you’ll see there are mounts for a power supply in the main compartment. These are covered with a blanking plate as this is the secondary location that is only intended for use if you are using two power supplies. The primary location for the power supply is down at the bottom of the case.

Also at the rear you’ll see two openings for external cooling systems and up at the top we have one of the 120mm Antec fans. Above the fan there are three flick switches that control the speed of the two fans in the roof of the case and the fan at the rear. 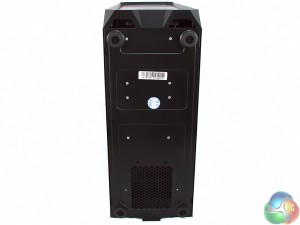 The bottom of the case is rather dull and pretty much the only feature of note is the perforated panel that aligns with the cooling fan in the power supply. This intake has a filtered screen that slips out to the rear of the case for cleaning. 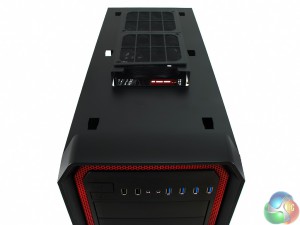 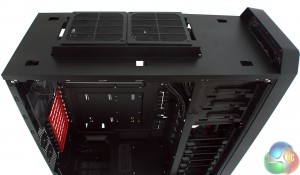 The plastic top cover is retained by two thumb screws and is very simple to remove, revealing the two 120mm fans and their gauze filters. As you can see from the photos the two fans sit in a housing that is raised 20mm above the top surface of the case. Glance back at the photos of the open case and you’ll see the fans are completely out of sight, and the same will be true when we replace the fans with the Corsair H100i radiator. 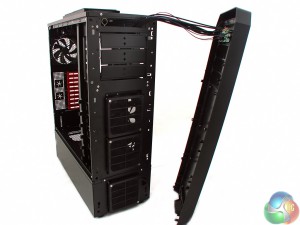 Remove four screws and the front panel pulls away to reveal the three filtered 120mm Antec fans and an octopus of cabling for the front audio and USB connections.

Connecting the three case fans is likely to be a pain as the cables will probably be too short to reach the motherboard headers as the Nineteen Hundred is so large. Antec supplies three adapters that allow you to power the fans from four pin Molex connectors which is not perfect but is better than nothing. Longer cables required here Antec! 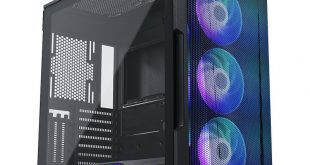 During CES earlier this year, we got a sneak peek at the Phanteks P500A chassis. …