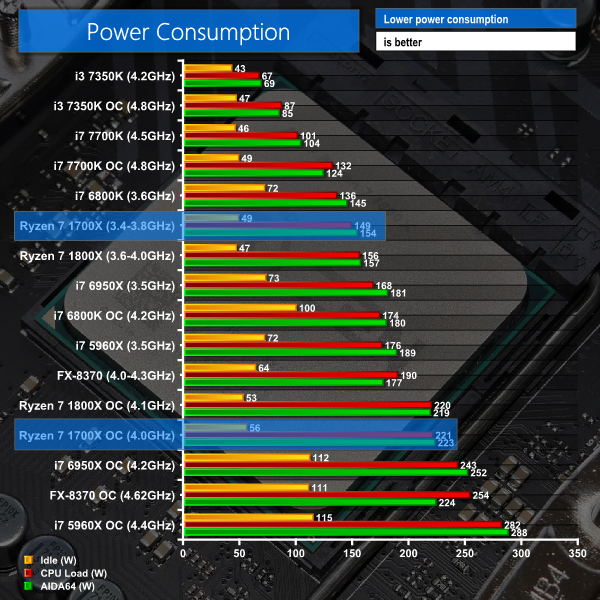 Power consumption for the Ryzen 7 1700X is slightly lower than that of the 1800X at stock clocks. This is due to its 200MHz lower operating frequency.

The picture changes when overclocked, though. While the difference in power draw between the 1700X and 1800X is too small to declare an outright victor, the latter is operating at a greater VCore for its higher clock speed but still manages to draw practically the same power. This gives an indication of the higher quality silicon used for the 1800X that is able to more efficiently transfer electrical power in useful work.

The 1700X draws a little more power than an i7-6800K at stock frequencies but it also offers greater computational performance. When both CPUs are overclocked, the 1700X demands noticeably more power in Cinebench than the 6800K but for that additional electricity usage it returns a 35% higher score.

Temperature recordings were taken using the Noctua NH-D14 for the LGA 1151 test system, Cryorig R1 Ultimate for the LGA 2011-3 system, and Noctua NH-D15 for the AM4 system. We use different coolers for speed purposes. Each CPU cooler’s fans were running at full speed. Ambient temperature was maintained at around 20°C.

Due to the use of slightly different CPU coolers, our temperature measurements should only be used as a guideline. Performance differences below around 3°C are small enough to say that cooling results were similar. 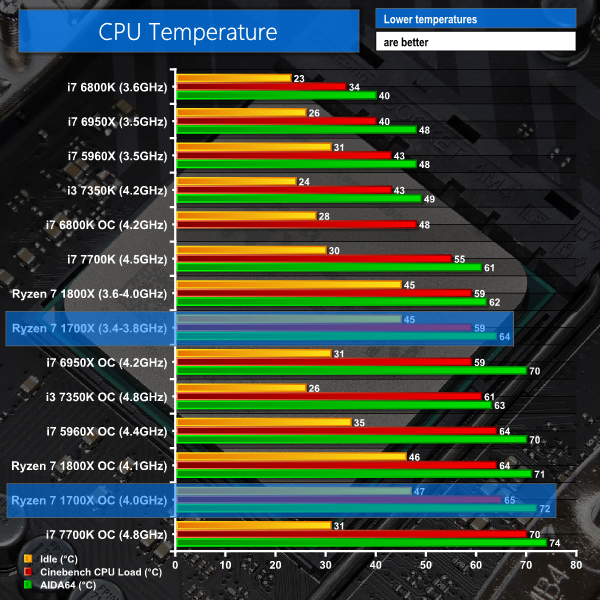 Temperature levels for both Ryzen 7 CPUs are similar. The 1700X tends to be a little hotter using our overclocked settings, despite the 1800X operating at a higher voltage level. This, again, points towards higher quality silicon for the 1800X, though that’s to be expected from the more expensive part.

AMD’s soldered heatspreader design with liquid-metal TIM does a good job at keeping the CPU well-cooled under load.