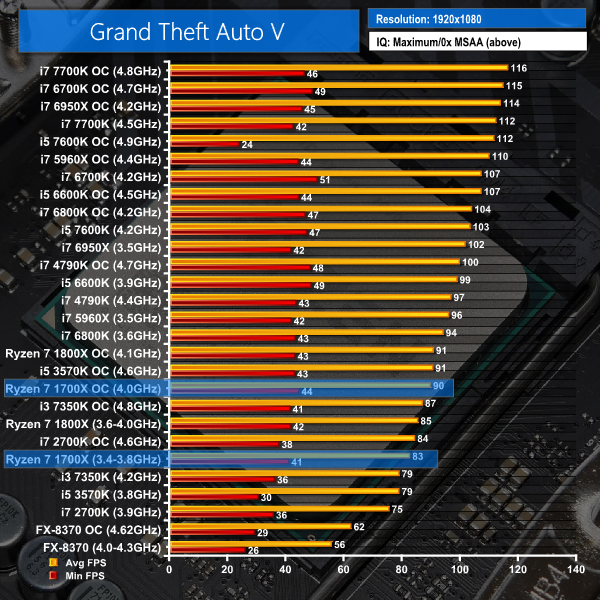 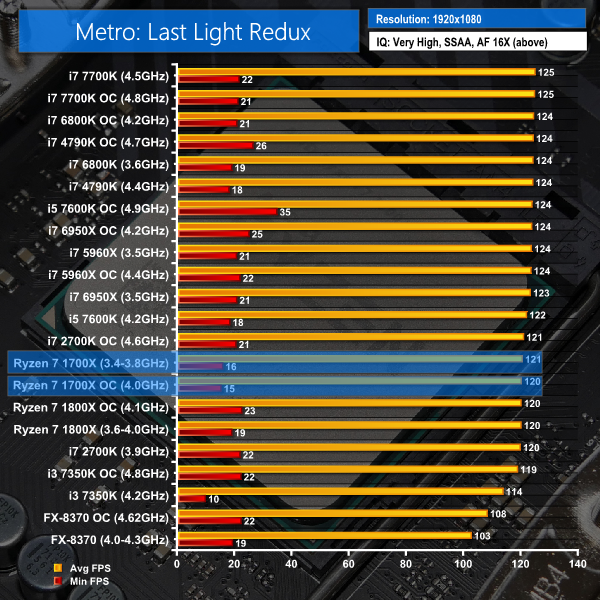 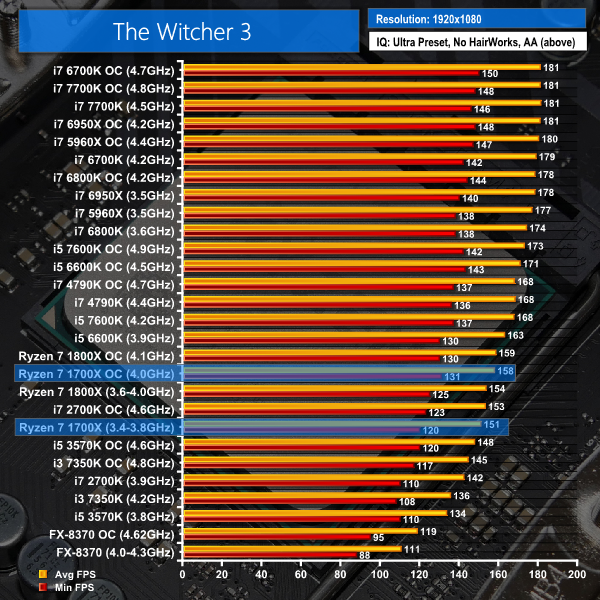 GTA V performance positioning for the 1700X is not great. At 4.0GHz, the 8C16T chip just about manages to match the performance of an overclocked Ivy Bride Core i5-3570K.All of Intel’s modern Core i7 CPUs on test are faster on average than the 1700X and they post similar or better m

Minimum FPS numbers (though there is a rather large degree of variance in this data for GTA V). If, like myself, GTA V is your favourite game and you like to play at 100Hz+, your money will be better spent on the Core i7-6800K. Expanding that point, Skylake architecture at high clock frequencies is best for GTA V but this does involve compromise from a core count perspective.

Metro: Last Light Redux doesn’t care much for CPU performance once you hit around 120 FPS. Even the old Piledriver-based FX-8370 manages to deliver more than 100 FPS on average in this benchmark. Ryzen 7 1700X is practically as good as any Intel competitor in Metro: Last Light Redux, whether you game at a high refresh rate or not.

Like many other DX11 titles, The Witcher 3 likes fast cores combined with a strong architecture. However, the game can also leverage a number of threads and effectively balance load across them, hence why the Core i7 chips form a solid group at the top of this chart. Ryzen 7 1700X is able to deliver more than 120 FPS even without an overclock in The Witcher 3.

Yes, this is ‘only‘ around Sandy Bridge- or Ivy Bridge-level performance but with a capability to drive even ultra-high refresh rate monitors at more than 120FPS most of the time, Ryzen 7 1700X is a fine choice for The Witcher 3 gamers. There are plenty of CPU cycles spare on the 8C16T part, too (sometimes as much as 60%).

To summarise this in a simple manner, if you game on a 60Hz monitor and simply do not care about frame rates above 60 FPS, the Ryzen 7 1700X is a perfectly capable gaming processor. With a 60 FPS limit, performance differences between Ryzen 7 and even a modern Core i7 or Core i5 are likely to be indistinguishable.

However, if you have adopted a new high refresh rate monitor that can tick at 100Hz, 120Hz, or 144Hz+, Ryzen 7 1700X will cause you to make some compromises in certain games. GTA V, for example, cannot hit a 100 FPS average using our game settings with Ryzen 7 1700X yet a similarly-priced i7-6800K can push 104 FPS average when overclocked. The other pair of DX11 titles tested are perfectly fine for high refresh rate gamers, though.