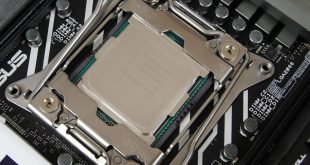 Intel’s new Skylake-X series of processors, including the current flagship Core i9-7900X being tested in this review, has been one of those launches where everybody has had a strong opinion since the announcement. Whether it’s through stiff competition from AMD, anger at Intel’s seemingly-intentional aggressive product segmentation, or the overall launch that seems to have been rushed, X299 and Skylake-X have been hot topics for several weeks.

We finally got our hands on the new 10-core, 20-thread Core i9-7900X processor that serves as the X299 platform’s and, by extension, Intel’s consumer CPU flagship… for the next couple of months, at least. How will the new $999 part based on Intel’s fast Skylake architecture perform?

That’s correct – we said $999. Quite a reduction compared to the ridiculous $1723-$1743 price point that Intel’s previous 10-core flagship – the Broadwell-E Core i7-6950X – sold for. Then there’s the naming, of course. In a move that strikes me as long overdue, Intel will be using the Core i9 branding for some of its higher-performance high-end desktop (HEDT) CPUs.

Personally, I see that as a reasonable move that reduces the complexity of the product stack to consumers – Core i9 should be everything that Core i7 is, and more. 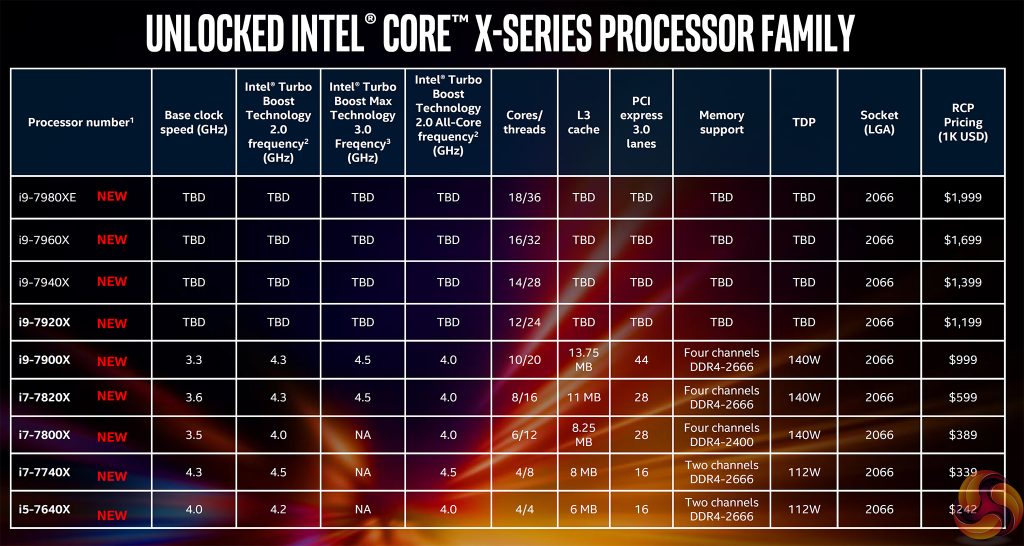 However, it looks like Intel has chosen PCIe lane count to be the dividing point for HEDT Core i7 and Core i9 CPUs, rather than something more closely tied to performance metrics, such as core count. As it stands, the 6C12T and 8C16T Skylake-X CPUs with 28 PCIe lanes are called Core i7 whereas the sole (for now) 44 lane offering – the 10C20T part – gets Core i9 branding.

That’s a harsh sucker-punch to enthusiasts who value more than 28 PCIe lanes with the cost for such connectivity now starting at $999 compared to $617 for the 40-lane Broadwell-E Core i7-6850K. Upcoming 12, 14, 16, and 18 core chips will also be called Core i9 but their details, other than pricing of course, are still non-existent.

That leads nicely onto the next point; what’s the deal with three Skylake-X CPUs at launch and four more due in the coming months (as far forward as October)? That’s unusual for a recent platform launch from Intel which generally sees a high percentage of the line-up available on the day 1.

It is almost blatantly obvious by now that the higher core count models are a reaction to AMD’s forthcoming up to 16-core Ryzen Threadripper competitors. That’s where a substantial proportion of the criticism has stemmed – consumers are reading into the situation as Intel being happy to push another slight boost to performance and small uplift in core count until the company is forced into a corner by AMD and must draw on the big guns as a reactionary measure, not a drive-the-market-forward measure.

With the scene set for Skylake-X and the X299 platform, let’s look at the specifications of the Core i9-7900X. The 10-core, 20-thread CPU is built on a 14nm process node and fits into the new LGA 2066 socket (which handily uses LGA 2011 mounting points allowing for re-use of CPU coolers). TDP is rated at the same 140W as Broadwell-E HEDT CPUs, though do not confuse this metric with power consumption – a different characteristic that is only loosely related.

You get quad-channel memory support, as one has come to expect from HEDT CPUs (ignoring Kaby Lake-X…), and Intel has bumped up the native frequency support to DDR4-2666MHz. Motherboard and memory vendors have shown off significantly higher operating frequencies which are well into the 3GHz range. Up to 128GB of that stuff should be a tasty proposition for many workstation prosumers.

The base clock speed is rated at 3.3GHz, which is only ever really utilised in heavy throttling situations or when running at high-performance idle, while the more important all-core frequency is a lofty 4.0GHz. Turbo Boost 2.0 can take any of the cores as high as 4.3GHz in lightly-threaded workloads, while Turbo Boost Max 3.0 (also seen on the Broadwell-E predecessors) can clock the two best cores up to 4.5GHz.

TBM 3.0 is now natively supported in Windows 10 Anniversary Edition, as well as 2017 Linux distributions, and the specific pair of cores that can boost up to 4.5GHz is determined on a chip-by-chip basis. Perhaps most importantly, all X-series processors feature an unlocked core ratio multiplier that allows for easy overclocking by end users.

So, you get a 45% reduction in LLC but a 300% increase in MLC. Overall cache capacity is reduced due to the bias towards capacity for L3 cache. But there is a greater quantity of cache one step closer to the CPU, at the MLC level. 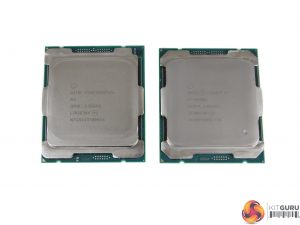 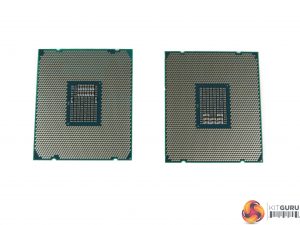 Intel’s Skylake-X and Kaby Lake-X processors form part of the new X299 platform. The new 200-series chipset gives the HEDT space useful features that have been present on 100-series and 200-series mainstream chipsets for a long time. Those features include use of a faster DMI 3.0 (compared to DMI 2.0 on X99) link, significantly-enhanced PCIe connectivity through the PCH, and support for RAID of PCIe NVMe SSDs. The chipset is given up to 30 high-speed I/O lanes, up to 24 of which can be used for PCIe 3.0 connectivity, up to eight for SATA 6Gbps, and up to ten for USB 3.0 5Gbps. Intel’s I219 NIC is supported as well as Optane memory (not that anybody buying this level of platform should care about Optane memory caching in the slightest).

Support for RAID of up to three PCIe NVMe SSDs is a positive of the 200-series chipset but the DMI 3.0 bandwidth becomes a limiting factor in that equation. That’s where Virtual RAID On CPU (VROC) comes in. Details are still scarce for VROC but it is essentially a method of allowing consumers to use multiple PCIe 3.0 lanes directly from the CPU to feed bandwidth-hungry RAID arrays. That could be very useful for users who want 2+ PCIe NVMe SSDs in a performance-enhancing RAID (0 or 5, for example) where the DMI 3.0 bandwidth would serve as a bottleneck to a PCH-fed solution.

The caveat is that Intel will force the use of a hardware key and is expected to charge in the order of one hundred to hundreds of dollars for RAID 1 and RAID 5 support. The solution is also expected to be limited to Intel’s own PCIe NVMe SSDs for boot support, which is a real shame for users licking their lips at multiple Samsung 960 Pros in an array. We cannot comment more on Intel VROC technology yet as the details are unclear but we consider it important enough to include in this piece, despite the relative lack of information. 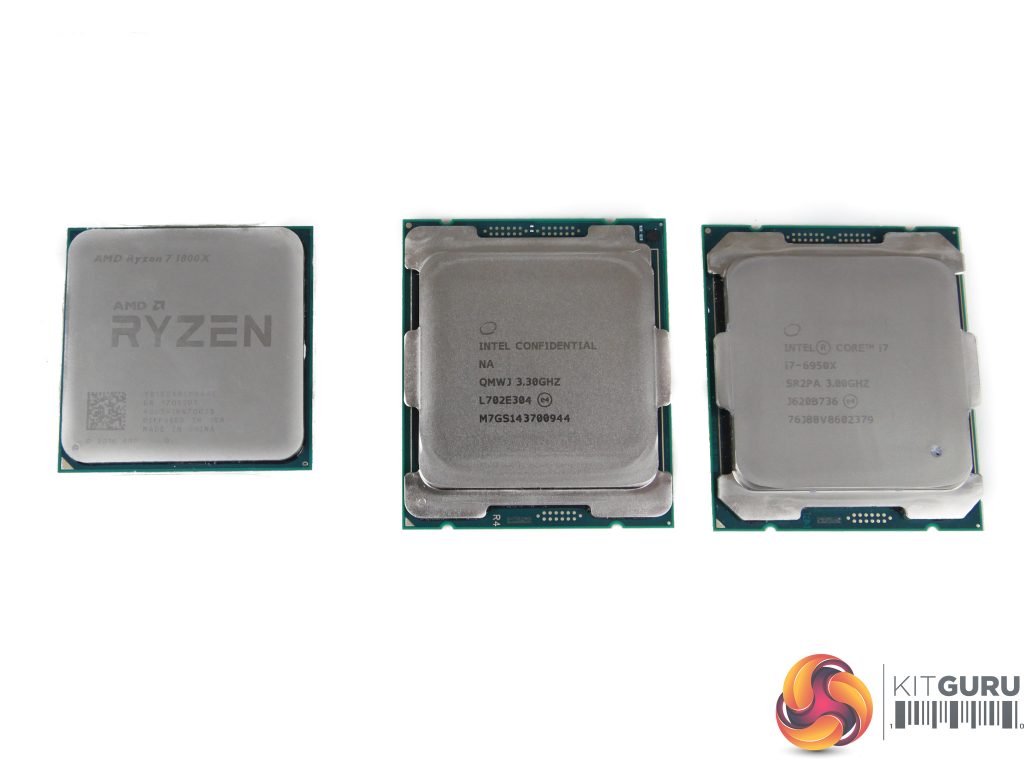 Primary competition for the 10C20T Core i9-7900X will come from its Broadwell-E predecessor – the 10C20T Core i7-6950X – as well as AMD’s 8C16T Ryzen 7 chips, such as the flagship 1800X. AMD is highly-likely to win the overall value comparison given Ryzen 7 and the AM4 platform’s distinct cost advantage. However, the Core i9-7900X is likely to show the strongest multi-threaded performance despite its significant price reduction compared to the Core i7-6950X.

Without further ado, let’s move on to overclocking and performance testing.