KitGuru was recently invited to the headquarters of Excel Esports, a British esports organisation with rosters in League of Legends, Valorant, Fortnite and FIFA. I may well consider myself a semi-decent competitive gamer, but unfortunately I was not there to be signed up to the professional esports ranks. Instead, Excel teamed up with Nvidia to show, first hand, the real-world benefits of low latencies and high frame rates for gaming.

For those who keep up to date with gaming and hardware news, you will be familiar with Nvidia's ‘Frames Win Games‘ campaign, where the green team shows a direct correlation between increased frame rate and an increased K/D ratio. High frame rate can only do so much however, with Nvidia also pushing big on lowering system latency, thanks to its Reflex technology.

First things first though, what exactly is Reflex? To answer that, we sat down with Rick Napier, Senior Technical Product Manager at Nvidia. In his words, ‘Reflex optimises the render queue to make sure you're just getting the frame just in time. So rather than having a queue of frames, which have been delivered by the CPU, which has already processed your input information, you are just delivering the frame from the CPU to the GPU just in time. So it's just displaying the most current information on your monitor. It's also sampling the mouse input at at a much later date, so you're getting the most accurate input from the mouse on your frame.' 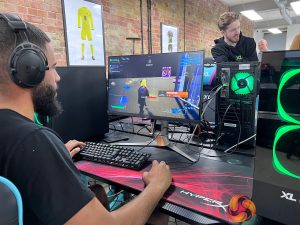 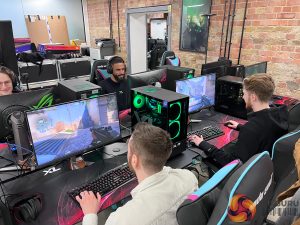 You may well have seen a Reflex setting in the games you play, with blockbuster esports titles including Rainbow Six Siege, Fortnite, Overwatch and more supporting the technology. Sam ‘Fields' Greenfield is an assistant coach at Excel Esports, specialising in Valorant, and I got the chance to ask him about the difference this technology, coupled with a high frame rate, can make.

Sam reckons that he, and a competitive pro, would instantly be able to tell the difference between playing Valorant with or without Reflex enabled. Esports is all about getting any competitive advantage, so he tells me, so there would be no reason for a pro not to use Reflex.

To try and put this to the test, we dived into two 1v1 deathmatches in Valorant. First, we both played on identical systems, packing RTX 3070 Tis and 360Hz monitors, both with Reflex enabled. Unsurprisingly, Sam beat me comfortably, 12-5. For our next match however, we added a twist – Sam moved over to a different system, now powered by a GTX 1060, with Reflex disabled. This time we drew 8-8.

‘I felt you were shooting me a lot sooner than I could shoot back in the second game', Sam explains, while he described the gameplay experience as more jittery and sluggish compared to the high-end system with Reflex enabled. Of course, this is not exactly a scientific study, but I also had a chance to play a couple of rounds on the GTX 1060 system and the difference in feel was evident immediately. 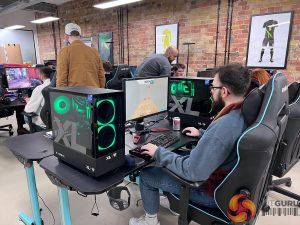 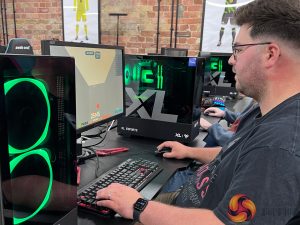 The good news is, you don't even have to take my word for it. I may have got to 1v1 a professional esports coach in person, but thanks to Nvidia's partnership with Kovaak's Aim Trainer, you can pit your skills against a range of pros and streamers, including Stodeh, iiTzTimmy and LuluLuvely.

It sounds easy – just click on the small red circles as fast as you can. The twist is that Kovaak's simulates three different latencies – 25ms, 55ms and 85ms – and you get a score for each of those three phases. You should see a higher score as latency decreases, and if you want to pit yourself against me, I got a best score of 291 – 93 over the 85ms phase, 95 for the 55ms phase, and 103 for the 25ms phase.

You can read more about Nvidia Reflex HERE and get Kovaak's on Steam HERE.

KitGuru says: Thanks to Nvidia and Excel Esports for inviting us down yesterday. I may not be good enough to play professionally, but maybe enabling Reflex in my next game of Warzone will help get me an extra kill or two.