Just a week on from the disastrous launch of AMD's RX 6500 XT, today we are checking out something I sincerely hope will be… better. It's admittedly a low bar to clear, but I am of course talking about Nvidia's RTX 3050 – the company's first RTX GPU in the sub-£300 price bracket, arriving with a $249/£239 MSRP.

Officially unveiled back at CES 2022, the RTX 3050 is an important milestone for Nvidia. When it first debuted RTX technology with the 20-series, the most affordable GPU was the RTX 2060, priced at a not-inconsiderable £329. For the RTX 3050, the MSRP is set at £239, and while we know that figure is almost certainly somewhat detached from reality, it's still going to be interesting to see exactly what an ‘entry level' RTX graphics card looks like in 2022. 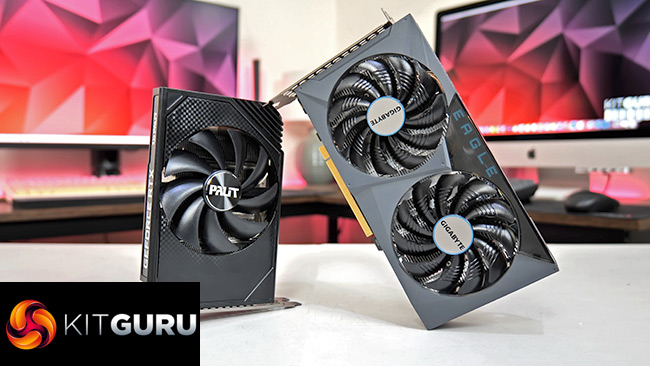 As a cut-down GA106 GPU, the RTX 3050 sports a total of 20 streaming multiprocessors (SMs).Thanks to Ampere’s new SM structure with its two FP32 datapaths, each SM houses 128 CUDA cores, giving a total of 2560.

Ampere also places one RT core, and four Tensor cores, in each SM, giving a total of 20 RT cores and180 Tensor cores. This is accompanied by 80 texture units, and 32 ROPs which are now housed directly within each graphics processing cluster (GPC), with 16 ROPs per GPC, and 2 GPCs in total for RTX 3050.

Rated clock speed is carried over from the RTX 3060, as we find the same 1777MHz boost clock. Of the two cards we are looking at today, the Gigabyte Eagle ships with reference clocks, while the Palit StormX OC sees this increased by 30MHz out of the box.

Memory is provided by 8GB of GDDR6, clocked at 14Gbps. Over the narrower 128-bit memory interface, we see total memory bandwidth hit 224 GB/s, a reduction of 38% against the RTX 3060. The PCIe interface has also been shaved down, with a PCIe 4.0 x8 connection, instead of the full x16 allocation.

Lastly, for total graphics power, Nvidia rates the RTX 3050 for 130W, a 40W (24%) decrease compared to the RTX 3060 that seems broadly in line with the reduction in core-count. We are using our new GPU power testing methodology in this review, so read on for our most detailed power and efficiency testing yet.