Hot on the heels of Nvidia's announcement at Virtual Computex 2021, today we can present our review of the RTX 3080 Ti. Built on the same GA102 GPU as the RTX 3080 and the RTX 3090, the RTX 3080 Ti sports a total of 82 Streaming Multiprocessors, only two fewer than the RTX 3090. Its memory allocation has been halved, with 12GB of GDDR6X which also runs fractionally slower. How much difference will those tweaks make to real world gaming though? That's what we find out today.

The first of these is Gigabyte's RTX 3080 Ti Gaming OC, a now-familiar looking triple-fan card. In fact, all three partner models are use thick triple-fan coolers, with the other two in question being the Palit RTX 3080 Ti GameRock OC and the Inno3D RTX 3080 Ti iChill X4. 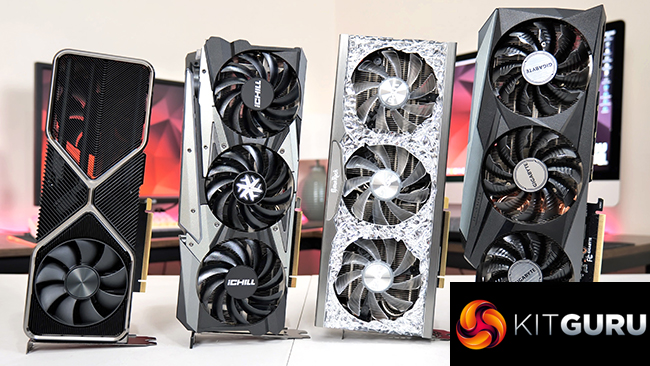 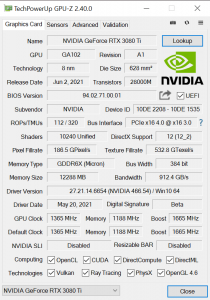 Ampere also places one RT core, and four Tensor cores, in each SM, giving a total of 80 RT cores and 320 Tensor cores. This is accompanied by 320 texture units and 112 ROPs which are now housed directly within each graphics processing cluster (GPC), with 16 ROPs per GPC, and 7 GPCs in total for RTX 3080 Ti.

Clock speed is another area where Nvidia has made cut backs compared to the RTX 3090. The RTX 3080 Ti Founders Edition has a reference clock of 1665MHz, a reduction of 30MHz against the RTX 3090, though all three of the partner cards we test come factory overclocked. We test real-world clock speed behaviour later in this review.

For the memory, Nvidia is using the same 384-bit bus as found with the RTX 3090. The memory allocation itself has been halved, to 12GB of GDDR6X, while it also comes clocked at 19Gbps instead of 19.5Gbps as with the RTX 3090.

Lastly, for total graphics power, Nvidia rates the RTX 3080 Ti for 350W, the exact same as the RTX 3090. This review is the first where we will debut our new GPU power testing methodology, so read on for our most detailed power testing yet.

Previous The Switch Pro is rumoured to be announced tomorrow
Next Watch Dogs: Legion’s 60fps update is live