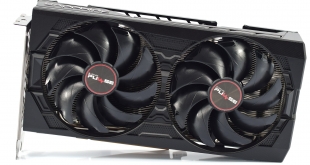 It has been over two months since AMD first announced the RX 5500 series of GPUs. Since then, Nvidia has launched both the GTX 1660 SUPER, and more recently the 1650 SUPER, in a pre-emptive attempt to render AMD’s new GPUs dead on arrival. Today, we can finally assess the performance of the Navi-based RX 5500 XT.

The first thing to note is that this review is concerned with Sapphire’s RX 5500 XT Pulse 4GB. 5500 XT is available in both 4GB and 8GB models (the only difference is the VRAM capacity), so if you want to see our review of an 8GB card, head over to the ASRock Challenger HERE.

The last point to note in this introduction is how RX 5500 XT fits in with the rest of the RX 5500 series. When AMD made the initial announcement back in October, core spec was announced for the RX 5500 ‘series’, but the 5500 XT was not explicitly mentioned. As it transpires, both the RX 5500 and RX 5500 XT use the exact same GPU, with the same core count. The primary differences are that RX 5500 (non-XT) has slightly lower clocks, is only available as a 4GB model, and is only available to OEMs. RX 5500 XT is available as a standalone part, so unless you want to buy a pre-built system, you can forget about the non-XT version of the 5500. 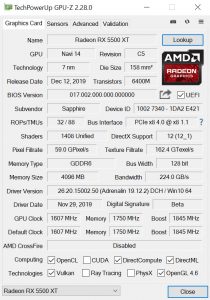 With that in mind, GPU specs for the RX 5500 XT have therefore been online for two months, so nothing new is revealed to us. Built on the same Navi architecture as the RX 5700 and RX 5700 XT, and fabbed on TSMC’s 7nm process, the RX 5500 XT consists of 22 Compute Units (CUs) and 1408 Stream Processors.

The same 14Gbps GDDR6 memory has also been brought down from the RX 5700 series, with 4GB or 8GB models. The 5500 XT however has a narrower, 128-bit memory interface, meaning total memory bandwidth is 224 GB/s, or half that of its pricier brethren.

As for clock speeds, the Sapphire card here follows the reference specification with a 1845MHz boost clock. Total board power is rated at 130W, or 30W above GTX 1650 SUPER.