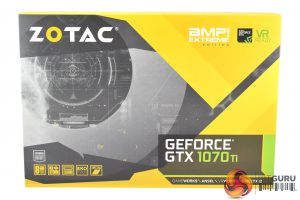 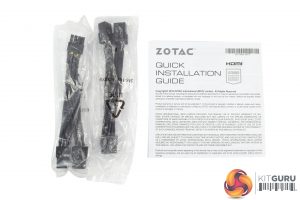 The Zotac GTX 1070 Ti AMP Extreme ships in an unmissable bright yellow box – it definitely stands out from the swathes of black product boxes we get into the KitGuru labs.

Inside, the only accessories are two 2x 6-pin to 1x 8-pin PCIe power adaptors, and one quick installation guide. 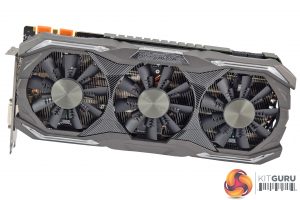 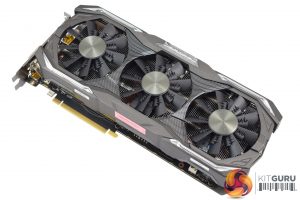 Now, moving onto the card itself, this things is an absolute beast. Measuring in at 325mm x 148mm x 56.6mm, it is safe to say Zotac has not held anything back from the card’s design.

In terms of aesthetics, the shroud is a sort of gunmetal grey colour, though there are also some carbon sections which add a little interest. Zotac calls this the ‘carbon exoarmour’ and it is certainly something different.

Looking at the cooling solution, the three fans are noteworthy as Zotac callas these ‘EKO’ fans, and it reckons they can deliver up to 30% more airflow. Each fan measures 90mm. 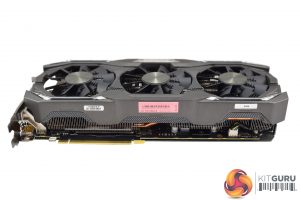 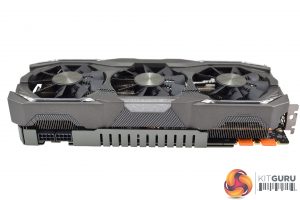 Given the 56.6mm thickness of the card, it also worth noting that it is a two-and-a-half slot card so it is definitely best to check your case’s dimensions if you are unsure if the card will fit. 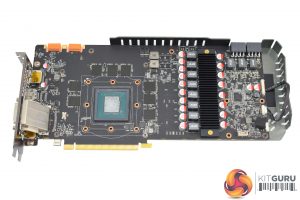 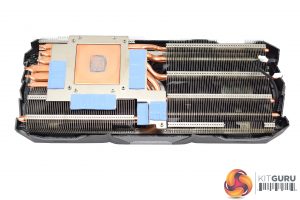 Prising off the heatsink is a simple matter of removing 5 screws – 4 spring-loaded GPU core screws and 1 secondary screw at the side.

The PCB is obviously a custom job, and I was immediately drawn to the secondary heatsink that is actually screwed onto the VRM MOSFETs – this simply increases the surface area to allow for better heat dissipation, but it is a nice touch. There is also a monstrous 8+3 power phase design to deliver stable voltage – ‘extreme’ indeed.

In terms of the heatsink, aside from its sheer size, the fact that it uses six copper heatpipes is also noteworthy – that should greatly help heat dissipation. There are also thermals pads applied to help cool the VRAM chips. 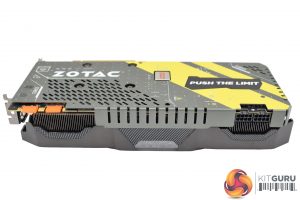 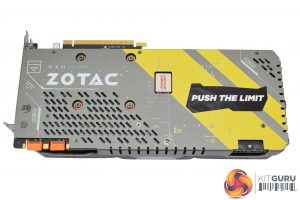 Now, moving onto the backplate, I must say this design is going to split opinion like no other. I thought Zotac had moved away from its yellow backplates when I saw the GTX 1080 Ti Mini, but clearly I was dead wrong.

Personally, I think the design is rather gaudy. The yellow is too bold for my liking, and the red lettering on the ‘power boost’ chip also clashes with the yellow strips. Then there is the ‘push the limit’ RGB section which is just unnecessary really.

Now, if you have a yellow themed build you may well like the design – but the fact is, many of us don’t, so I can only see the design limiting the overall appeal of the card. Having a fixed-colour backplate also defeats the point of having RGB LEDs as well. 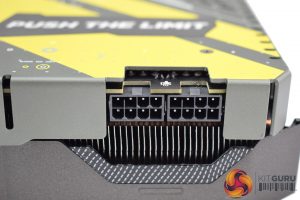 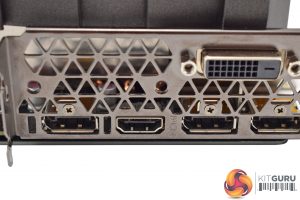 Elsewhere, we can see the AMP Extreme actually requires two 8-pin PCIe power connectors, despite the card still having the same 180W power consumption rating as other GTX 1070 Ti models. Given single 8-pin plug delivers 150W, and 75W comes from the PCIe 3.0 x16 slot, this does feel a bit unnecessary.