With the Pascal architecture hitting two years old, there is a hunger in the market for a new generation of graphics cards from Nvidia. Rumours surrounding the GTX 11-series have been floating around since January. Most recently, signs have begun pointing towards an August launch and the latest rumour claims to have hard dates.

This isn't the first rumour to cite hard dates for this launch. There was some seemingly compelling evidence for a July launch a while back. That of course did not come to fruition, so take this latest rumour with a pinch of salt too. This week, the YouTube channel ‘Gamer Meld' posted a video claiming to have details on Nvidia's next-gen launch, with a ‘leaked email' showcasing a GPU partner liaising with a retailer on specific announcement and launch dates. 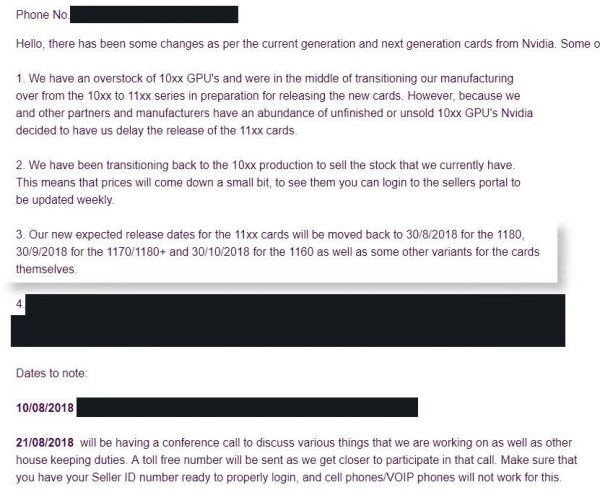 Apparently, a conference call will be held on the 21st of August to brief partners on launch plans. From there, the GTX 1180 will supposedly see the light of day on the 30th of August, with the GTX 1170 scheduled for the 30th of September and the GTX 1160 on the 30th of October.

There are a few red flags worth pointing out. Much of the information found in the video is a summarisation of recent rumours that have been thrown around. Beyond that, there is mention of a GTX 1180+, which is something we've not seen from Nvidia in the past. Finally, we usually see the GTX xx80 and xx70 cards launch at the same time, but according to this rumour, they will be spread out by one month, which is another odd detail.

A few weeks ago, reports did begin circulating claiming that Nvidia had an event planned for late August, around the same time as Gamescom in Germany. This isn't the first time we've seen rumours pick up steam, but hopefully more information will start coming out over the next few weeks to either prove or debunk these most recent claims.

KitGuru Says: There is the possibility that these dates are fake, and there is certainly room to cast doubt. With that in mind, do treat all of this as rumour for the time being as we wait for more information to come out.