This has been a turbulent week for AMD to say the least. RX Vega is officially here, which is positive news but unfortunately, pricing fluctuations have swiftly dirtied the waters and shifted the story. We initially assumed that low stock was the cause of Vega jumping well past MSRP but that doesn’t seem to be the case after all. Today, KitGuru has been scouring for answers and from what we know now, it seems that AMD has created quite the messy situation by not properly disclosing RX Vega pricing and effectively blindsiding consumers and journalists.

At the end of July, KitGuru was one of the publications invited to SIGGRAPH 2017, during which, AMD finally unveiled RX Vega to the world. At the time, we were given a $499 MSRP for the RX Vega64, which we were told should work out at around £450 here in the UK. What AMD failed to disclose was that this was intended as a ‘launch day only’ price, causing undue confusion for buyers, putting unnecessary blame on retailers for ‘price hikes’ and even potentially skewing the conclusions of early reviews. 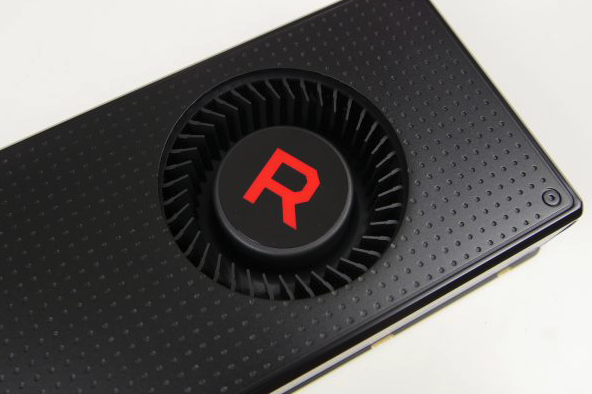 So what exactly is going on with Vega’s pricing? We got in touch with Andrew Gibson at Overclockers UK who gave us the full breakdown:

“Launch price was $499 with NO games for the Black card, as outlined to us by AMD as a launch only price. AMD allowed us to sell a set amount at this price, which was several hundred, clearly not enough as they were sold out in approximately 15 minutes. After this the regular price was $599 with FREE games for both the black and silver cards, $699 for the aqua card plus taxes.”

Gibson’s claims are corroborated by an additional source too, as Norwegian tech retailer, komplett.no, also spoke out, telling the site tek.no that the cheaper launch price for RX Vega64 was limited to just 275 cards to allow it to appear more favourable at launch. Here is the full quote translated:

“Komplett.no today confirms to Tek.no that the price of just over 5,000 kroner was limited to a limited edition of 275 graphics cards, as the company – as one of AMD’s “selected” online stores – was allowed to sell at a favourable price at launch. The RX Vega 64 version we had for sale was in a limited edition of this price and will unfortunately not be put up for sale again. When these were sold out, we had to remove this product from our pages”. 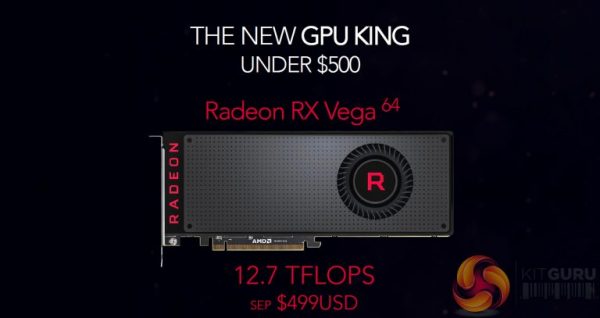 As part of the presentation sent out to press following SIGGRAPH this year, AMD included a slide (pictured above) that very clearly shows the Radeon RX Vega64 listed with a $499 price tag. AMD even went as far as to label the card the “new GPU king under $500”. At no point was ‘temporary’ or ‘limited’ pricing ever communicated to journalists or the public. This has led to retailers like Overclockers UK taking a lot of flack from potential customers, as many are of the mind that retailers are just choosing to sell above MSRP. Unfortunately in reality, retailers are simply abiding by the pricing AMD set for them, but did not communicate to the rest of us.

Gibson has told us that with the new MSRP now in place and stock levels fluctuating, we could see RX Vega64 sell for anywhere between £549 and £649, with the £449 price tag being ruled out entirely:

“Unfortunately AMD did not make the launch pricing plan clear at all to the press or the consumer, which has caused a lot of confusion, if we could sell cards at £449 and make money, they’d be at that price. If that was the case we probably would have sold around 5,000 units now at OcUK, whereas the reality is we’ve sold a little over 1000”.

For now, we have no idea if AMD will support the the price it originally announced again.

AMD’s statement is ambiguous at best and unfortunately, provides no real, definitive answers. You can read our thoughts on the statement itself, HERE.

KitGuru Says: This has honestly been quite a shocking turn of events and it is something AMD really needs to address. With everything AMD’s marketing team has been up to these last 8 months, I think it is clear that going forward, they need a new strategy.