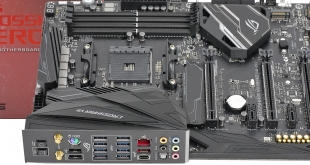 We received our sample of the Asus ROG Crosshair VII Hero Wi-Fi as part of the press kit that AMD delivered for the launch of Ryzen 7 2700X and Ryzen 5 2600X CPUs. As we expected, the Crosshair VII Hero is a high end motherboard that is loaded with overclocking features and while it looks and feels really solid, our initial testing suggested that performance was nothing special.

This was pretty much the opposite of what we expected from the ROG brand, however it seemed unlikely Asus had made a fundamental error with the design so we decided to hold off with our review until Asus had the chance to update the BIOS as that can make a massive difference to the way a motherboard behaves. In the intervening period Asus has issued a steady stream of updates including a BIOS that supports a new version of AGESA, which is the sort of thing we expect, and then Asus sent over a Performance BIOS that looked very interesting.

In our video we focus on voltage settings, power draw and performance as those are the aspects of the Asus ROG Crosshair VII Hero Wi-Fi that have changed with the BIOS, however it is well worth going around the other features one more time.

Some features will appeal to mainstream users such as the way the I/O panel is jam-packed with USB ports or the inclusion of high end 802.11ac Wi-Fi and Bluetooth. Other features are aimed squarely at the hardcore ROG customers, such as the multimeter points located next to the main 24-pin power connector or the micro buttons that give you the tools you need to work with the overclocking features in the BIOS as quickly and efficiently as possible.

There are no graphics outputs on I/O panel and it therefore follows the Asus ROG Crosshair VII Hero Wi-Fi does not support AMD APUs, even though they are pin compatible and will drop in the AM4 socket. This makes perfect sense to us as no-one in their right mind would buy this motherboard and then rely on integrated graphics.

Indeed, anyone buying this motherboard is certain to be an enthusiast and when they install the Asus in a PC case they will be pleased to find it sports eight 4-pin PWM fan controllers, which surely offers full control for any level of cooling you may desire.

In terms of styling and build quality the Asus ROG Crosshair VII Hero Wi-Fi follows the usual grey and red theme with a lot of solid engineering from the heatsinks on the VRMs with their linking heatpipe to the aluminium cover on the upper M.2 slot.

The Crosshair VII Hero WiFi is an evolution of the X370 Crosshair VI Hero so there isn’t much to see that is new. When we checked the VRM layout it became apparent the two VRMs directly below the power connectors control the SoC, which is unusual yet perfectly sensible. In general the Vcore VRMs are arranged in an L shape and the SoC VRMs are positioned at the top of the board. The SoC leads an easier life than the Vcore so Asus has taken the novel approach of placing those VRMs at the hot spot in the angle of the L shape, which means the other VRMs have better access to cooling air.

We were taken aback by the beta of Asus GRID which is software that works in a similar manner to MSI Live Update and seems to be triggered automatically by the BIOS. Put it this way, we didn’t install Grid yet there it was in Windows downloading drivers and getting the Crosshair VII Hero ready for action.