We leave the system to idle on the Windows 10 desktop for 5 minutes before taking a power draw reading. For CPU load results, we read the power draw while producing five runs of the Cinebench multi-threaded test as we have found it often pushes power draw and temperature levels beyond those of AIDA 64 and close to Prime 95 (non-AVX) levels.

Even five continuous loops of Cinebench results in a short run time on high-performance CPUs which influences the validity of the temperature reading, so we run 5 minutes of AIDA64 stress test to validate data. 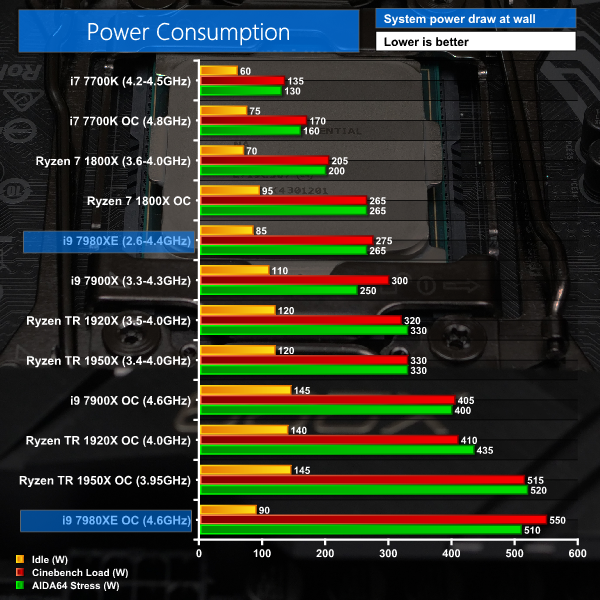 Here’s an update of the VID listing with the addition of power draw figures taken during Cinebench R15. 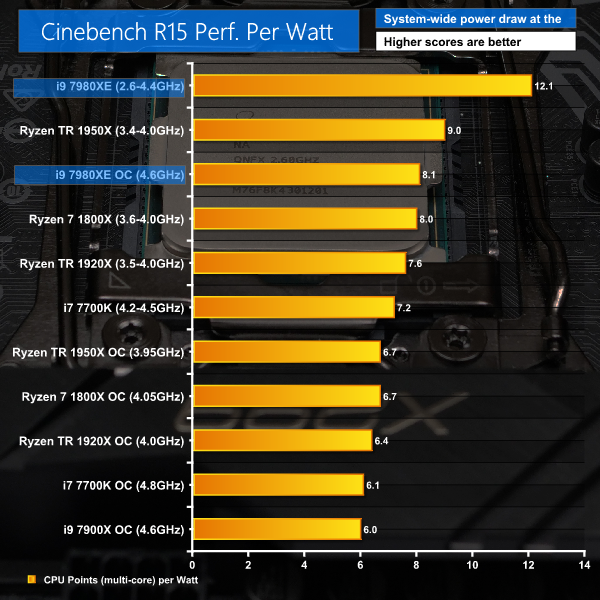 At stock clock speeds the Core i9-7980XE compares very favourably with the i9-7900X and also with both models of Threadripper. When the 18-core is overclocked the power draw increases dramatically, demanding 145W more than the i9-7900X and is in the same ballpark as the overclocked TR 1950X.

Our chart of Cinebench R15 performance per Watt clearly shows the Core i9-7980XE does a remarkably good job both at stock clock speeds and when overclocked to 4.6GHz. 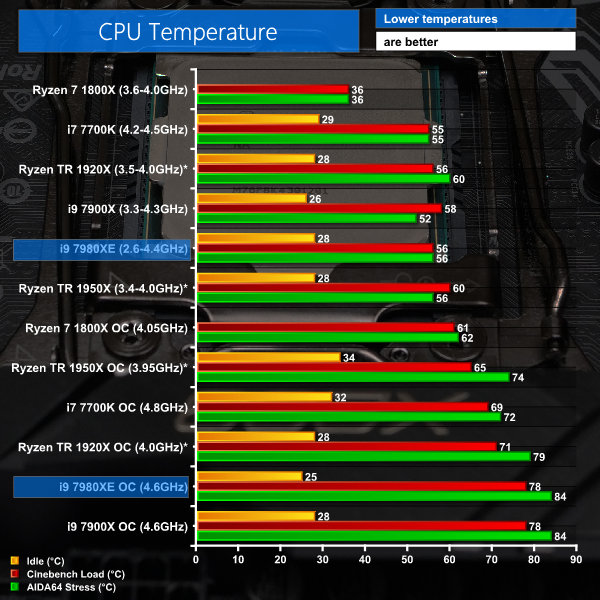 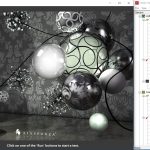 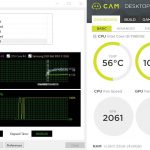 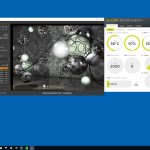 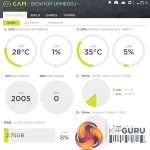 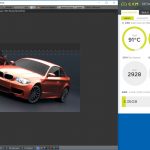 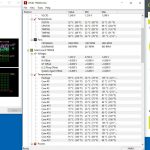 Here’s our final update to the overclocking table, this time with the addition of CPU temperatures.

These figures are effectively identical to the Core i7-7900X which is simply remarkable as Core i9-7980XE has almost double the number of cores. Furthermore you may have noted in our video that we tested the Core i9-7980XE with a 240mm Fractal Design Celsius S24 All In One in Auto mode at stock clock speeds and simply clicked up the performance into PWM mode when we overclocked the CPU.

Previously we have used a 280mm AIO with the fan speed set to maximum which delivers a clear benefit but also makes the system horribly antisocial.

In recent times Intel has struggled to shift heat out of the CPU package so no matter what CPU cooling system you use the problem lies within the CPU, hence our decision to use a more civilised CPU cooler. Our test results suggest that Intel has updated the CPU package in some way however the rumour mill tells us that Intel has continued to use TIM inside Core i9 up to and including the 16-core model.

It would be perverse for Intel to have done something different with the Core i9-7980XE such as using liquid metal or solder so we shall return to this point when we have more information. We shall certainly test Core i9-7980XE with a selection of coolers and will have to think long and hard about delidding this US$1999 CPU to improve cooling.