Gigabyte has set its TRX40 motherboard stall out in preparation for AMD’s 3rd generation Ryzen Threadripper CPU launch. The new generation of AMD’s high-end desktop processors is due on 25th November, so motherboard partners for the new platform are showcasing products ready for the big launch.

A new range of Aorus motherboards from Gigabyte will support the TRX40 platform, with the TRX40 Aorus Xtreme heading the lineup and boasting a whopping 16+3 phase digital power delivery system to handle the high power draws 3rd generation AMD Ryzen Threadripper will demand. The VRM MOSFET will be cooled by Gigabyte’s excellent Fins-Array Technology thermal solution that includes an 8mm heat pipe and a Nanocarbon baseplate.

Along with the beefy power delivery system, the Gigabyte TRX40 Aorus Xtreme motherboard will include PCIe 4.0, server-class Intel X550-AT2 Dual GbE LAN, Wi-Fi 6, eight DIMM slots to support quad-channel DDR4 memory up to 4400MHz+ performance with XMP and more. All these features rolled into one package provides the perfect base platform for high-end workstations to content creators or a powerful system for hardcore gamers. 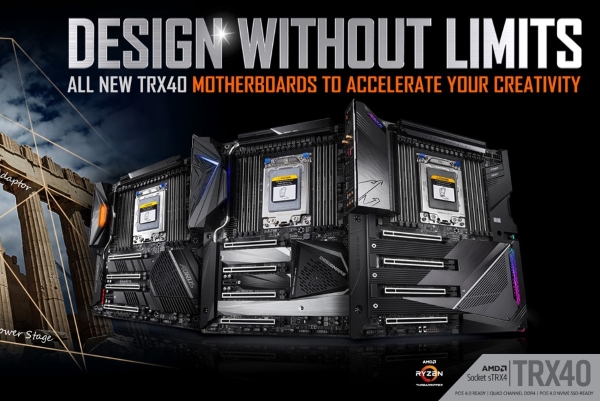 Both the TRX40 Aorus Xtreme and the TRX40 Designare are bundled with the Aorus Gen 4 AIC Adaptor, capable of housing up to four PCIe 4.0 M.2 SSD’s. The Aorus Gen 4 AIC offers users flexibility for storage setups and can be configured with a RAID 0 array by a single click setup to provide impressive storage performance. Also bundled with the TRX40 Designare motherboard is the GC-Titan Ridge AIC card which offers transfer speeds up to 40 GB/s and supports up to three devices on each port.

KitGuru says: Not long to go now until the highly anticipated 3rd generation AMD Ryzen Threadripper processors are upon us. With Gigabyte adding to other TRX40 motherboards that have already been announced, users of Threadripper 3000 will certainly have plenty of options to choose from when it comes to motherboard selection for the new HEDT platform.