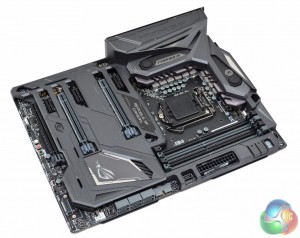 The Maximus IX Formula is well styled and likely to appeal to a wide audience. The ASUS ROG design team has always been adept at making appealing designs and the Maximus IX Formula is certainly no exception. There is a clear emphasis on neutrality of the design with a two-tone black and grey colour scheme the sensible choice, enhanced by onboard configurable RGB lighting.

ASUS also permits even further customisation options with its 3D Printing templates and optional RGB headers so the only limit to the type of system that can be built is the user's imagination.

Along the side of the motherboard is a plethora of useful functionality including power and reset buttons, a debug code reader, two fan headers, a right-angled USB 3.0 header and six SATA ports.

It is worth considering that the previous Maximus VIII Formula had 8 SATA ports as well as a native U.2 connection. This time around ASUS has ditched 2 SATA ports and the U.2 in favour of an extra M.2 port which is a trade-off that probably makes sense given trends in the SSD market.

The USB 3.1 solution is now entirely provided by ASMedia's ASM2142 controller whereas on the Maximus VIII Formula Intel's Alpine Ridge controller provided the USB 3.1. Unfortunately, since we've not been able to directly compare the two, it isn't possible to say if this move is beneficial or negative for the Maximus IX Formula.

In theory there's nothing to stop ASUS, or any other case vendor for that matter, to sell special upgrade kits for existing cases on the market to enable USB 3.1 front panel ports with the ASUS header. 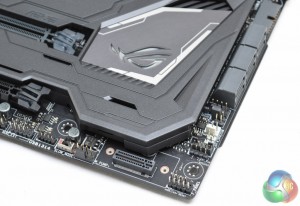 Near the SATA ports you'll also be able to locate the three headers for water cooling hardware – two water temperature sensors and one water flow sensor. 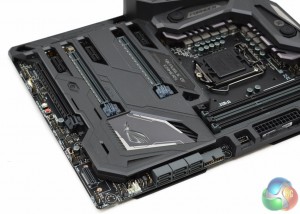 Along the base of the Maximus IX Formula is an array of buttons – MemOK!, Safe Boot and Retry, as well as a slow mode switch. In terms of interfaces there is a vertical facing M.2 port, to which ASUS provides an accessory bracket and mounting points for it, a couple more fan headers, front panel and audio, TPM, USB 2.0 and the ROG Extension header.

The first RGB header is found in this section of the motherboard and has the interface +12v, G, R, B. 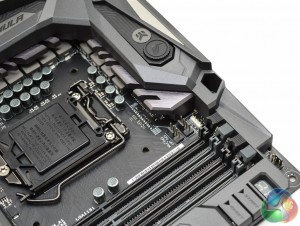 The second RGB header is located with the CPU fan headers and uses the same +12v, G, R, B interface. 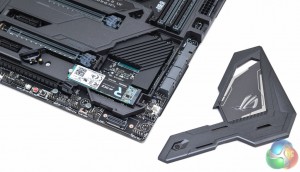 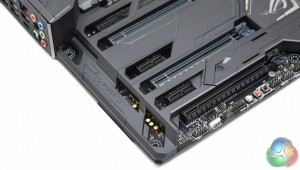 The chipset PCH has only a stylised heatsink on the exterior as it is removable via a single screw which allows access into the main M.2 area. Beneath the plastic shroud a standard metal heatsink is in-place to cool the PCH.

The majority of the audio hardware sits below the plastic shroud on an isolated PCB but you can see some of the Nichicon capacitors showing through a cut out. Other audio hardware includes an ESS ESS9023P DAC, RC4580 Buffer, high-precision clock source and De-pop MOSFET in addition to the new Realtek ALC 1220 codec previously mentioned. 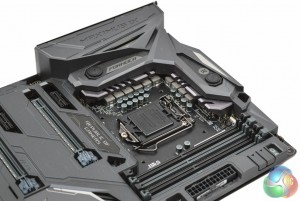 The primary VRM components are mounted beneath the CrossChill EK II waterblock which acts as a heatsink when run in air-cooled mode or as a waterblock when operated in water-cooled mode.  The waterblock uses G1/4in threaded fittings and comes pre-fitted with two threaded covers.

The I/O area, rather uniquely, comes with the shroud pre-fitted to the motherboard meaning system builders will never again have to worry about forgetting to install the I/O shield. The rear I/O connectivity is as follows: 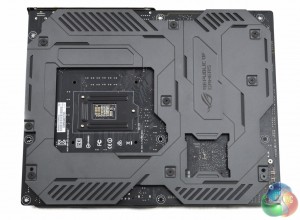 Underneath the Maximus IX Formula the shroud is metal and provides additional cooling and structural rigidity to the motherboard, whereas on top it is plastic and mainly for aesthetic purposes. The metal shroud on the bottom is easily removable with standard Phillips head screws should it pose any compatibility issues with CPU coolers or cases.