To test the ASUS Maximus X Formula motherboard’s CPU overclocking potential, we set the CPU vCore no higher than 1.3V and push for the highest stable clock speed. We maintain the DRAM frequency at 3200MHz to take memory stability out of the overclocking equation. Once the highest clock speed for 1.3V is achieved we see if there is potential to roll back on the voltage while maintaining system stability. 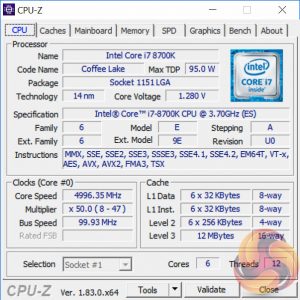 The ASUS Maximus X Formula had no issues achieving the 5GHz overclock with a moderate voltage of 1.28 volts, at 1.27 and below we experienced stability issues.

However, we had considerable problems trying to get the UEFI-defined manual core voltage to hold constant when under load in the operating system. We tested a range of voltage and LLC combinations to prove our point:

As our results show there was no possible LLC value that would permit 1.275 volts of UEFI-defined manual core voltage to translate into 1.275 volts of vCore within the operating system, the same for 1.3 volts. In the end the closest we could get to 1.275 volts was by setting 1.31 volts with a Level 5 LLC, as level 5 LLC drops the voltage down. Some voltages over supplied vCore considerably when using Level 6, 7 and Auto LLC settings.

KitGuru informed ASUS of its findings prior to publication and were informed that “in engineering terms our voltages are still within 1% of the target value”, which in some cases is not true as 1.296 volts is 1.6 per cent out from 1.275 volts. ASUS also told KitGuru that “there may be an inaccuracy recorded in CPU-Z due to things like the CPU Contact pins, the CPU socket and trace impedance” and that “the voltage you are recording isn’t an overshoot and will not damage the CPU”. No UEFI update was pledged from the company based on our findings and we were using the latest UEFI version available, number 1003, dated 21st December 2017.

Ultimately a motherboard of this stature should be able to provide perfect vCore consistency between the UEFI and operating system with minimal effort required from the user. However, it is still possible to achieve the desired vCore with some “creative accounting” of using a higher UEFI voltage than required with a Level 5 LLC to drop it down. 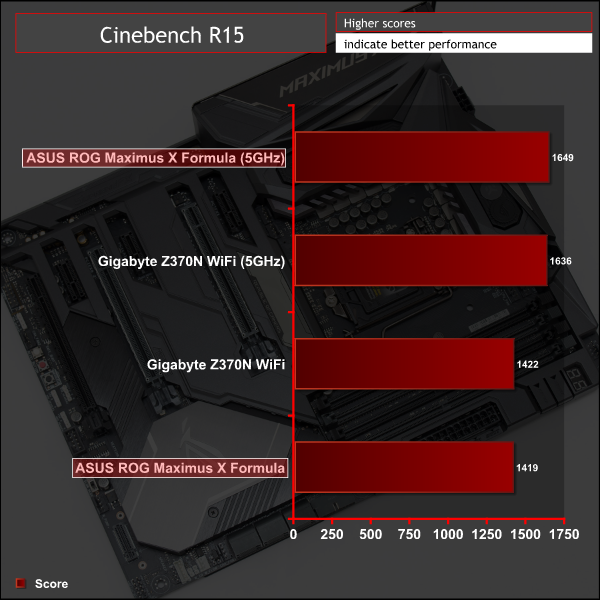 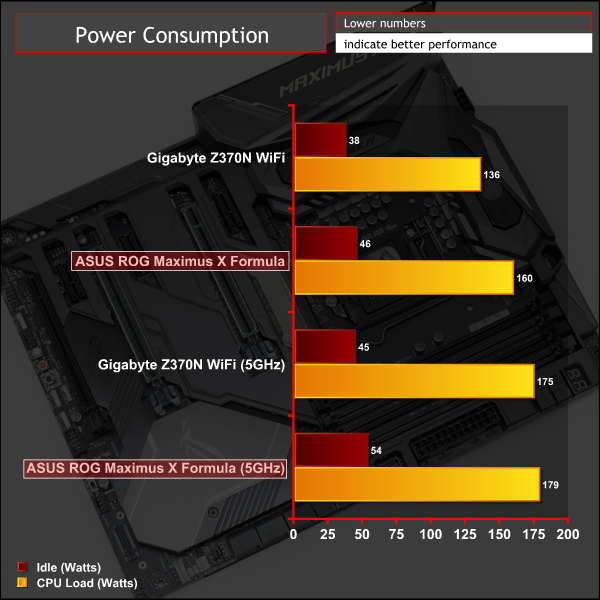 The stock power consumption for the ASUS Maximus X Formula was fairly high at load due to higher than required vCore values for Intel stock settings – under sustained stable load it was 1.22 but it rose as high as 1.26-1.3 under some load scenarios. At overclocked settings the gap between the ASUS and Gigabyte motherboards narrowed to almost nothing since manual voltages were being used to set both boards to around 1.28v on the vCore.