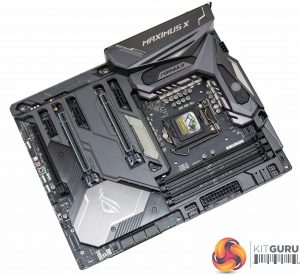 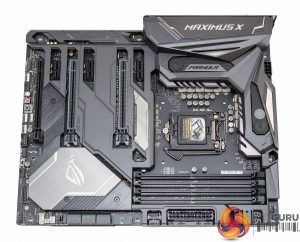 Aesthetics are undoubtedly subjective by nature but it is hard to argue that the Maximus X Formula isn’t a stylish motherboard. There are few motherboards that have such a distinctive appearance but the ROG Armor and CrossChill II Waterblock give the Formula a unique and recognisable design.

The red and black colour scheme for Republic of Gamers motherboards has been gone for a while now as Z270 was similarly neutral of palette and Z170 had already minimised the colour red to mere accenting. That shift to black, grey and silver with added RGB lighting has been witnessed across the motherboard industry and ASUS were an influential brand in defining that market shift. 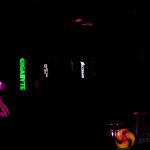 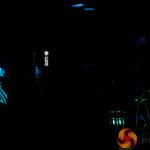 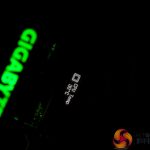 The lighting for the Maximus X Formula covers numerous zones including the chipset heatsink, PCIe lanes, rear I/O area and power/reset button area as well as optional LED headers (type RGB or addressable). ASUS ROG provides AURA companion software to control all the functionality of the LED lighting used with the motherboard.

Enhancing that customisation aspect further is the LiveDash OLED display which can be altered to show any number of system parameters but in our case ASUS had pre-loaded to display the KitGuru logo. Customisation can be controlled with the provided companion software which we’ll cover later on.

Positioned as a high-end motherboard it is fitting that the Maximus X Formula has so many buttons – Retry, Safe Boot, MemOK, Slow Mode, Power and Reset in addition to a code reader, diagnostic LEDs (Q LED) and an LN2 mode jumper. ASUS also includes four LED headers, two of the 12V G R B type and two of the addressable type (5V, D, +).

At the top of the motherboard is a single 8 pin EPS for CPU power and a H_AMP fan connector. The H_AMP connector, along with W_PUMP+, support up to 3 amps of output at 12 volts for a maximum of 36 watts of power delivery. All other fan connections support 1A/12W. There are a number of caveats to each of the fan headers so users should refer to the relevant part of the manual when configuring the system.

The rear I/O consists of the following connections and comes pre-fitted with the I/O shield: 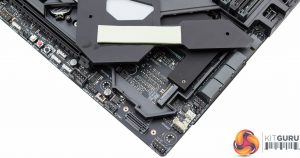 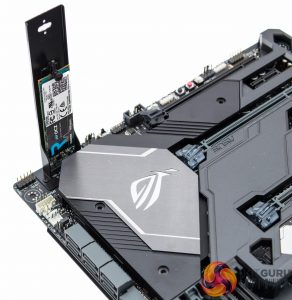 There are dual M.2 slots for the Formula one of which is horizontal and the other vertical. The horizontal M.2 connection sits below a heatsink with a thermal pad, the heatsink jointly cools the chipset PCH and the M.2 drive. Up to 110mm drives are supported in this slot in either PCIe or SATA mode.

The second M.2 slot, which supports PCIe-only and up to 110mm drives, mounts vertically using the supplied M.2 bracket. It’s a novel solution and shouldn’t interfere with anything else except for a graphics card in the last PCIe 16X slot – which seems unlikely given it is only wired to 4X. 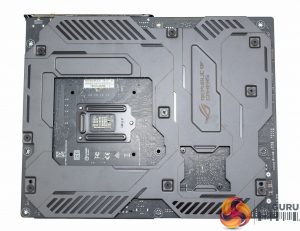 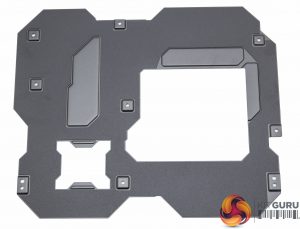 On the underside of the motherboard is the second part of the ROG Armor which is metal, not plastic like the top part, and includes an electrically insulating covering. 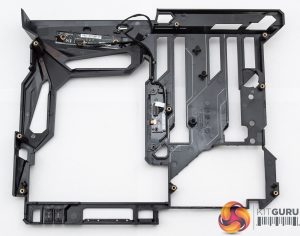 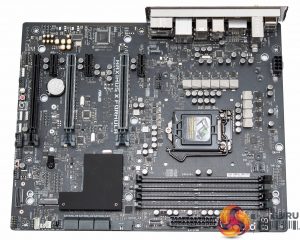 The plastic cover on top is easily removed having unscrewed all the screws from the bottom Armor. Integrated into the plastic Armor are two separate PCBs one which provides LED lighting function and the other the LiveDash OLED display, both these PCBs connect directly into the motherboard.

The CPU VRM heatsink was then removed to reveal the Maximus X Formula in all its uncovered glory. 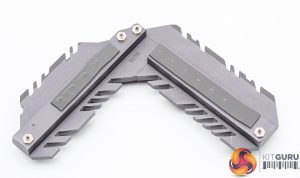 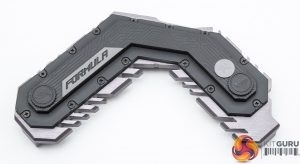 The EK CrossChill II waterblock uses G1/4″ fittings and uses copper water channels internally. The base makes contact via thermal pads and the water block integrates into a larger aluminium heatsink so it is effectively a hybrid solution that can run on air or water. ASUS claim up to 35 degrees Celsius lower temperatures when using water cooling. 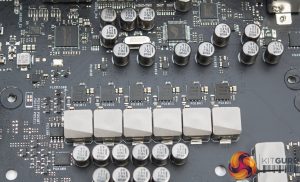 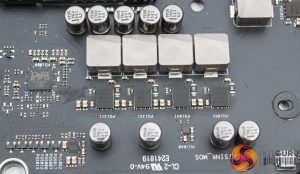 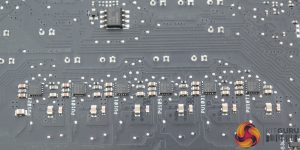 There are four International Rectifier IR3599 phase doublers in use too, three for the row of six and one for the row of four. Thus the likely configuration is that the PWM controller operates as a 4+2 VRM with the four IR3599 phase doublers turning those four phases into eight for a total of 8+2. Those ten phases probably split as eight phases for the vCore and two for the iGPU.

ASUS also uses a baseclock (BCLK) generator, IDT6V41638B, to increase the maximum capability of the CPU baseclock when overclocking.

The VCCSA and VCCIO CPU rails are formed from a number of other MOSFETs and regulators distributed between the CPU socket and first PCIe lane including some ON-SemiConductor MOSFETs (4C09B, 4C06B).

A custom IC, branded with the ROG logo, near the rear I/O provisions ROG Keybot hardware-level controls where most motherboard vendors provide the functionality at software-only level. 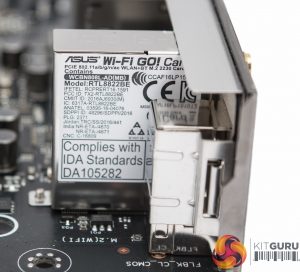 The audio components are high quality and consist of the Realtek ALC1220 codec (custom-packaged as ROG S1220), an ESS Saber DAC ES9023P, Texas Instruments RC4580 operational amplifier and Nichicon Gold Series audio capacitors. Everything sits on a separated PCB and the audio jacks are gold plated too.

The WiFi and Bluetooth combination module is based on the Realtek RTL8822BE which is an 802.11ac 2T2R solution, supporting MU-MIMO, with Bluetooth 4.2.