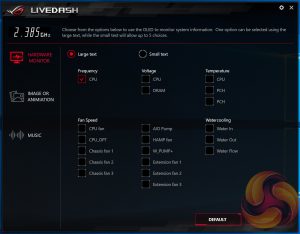 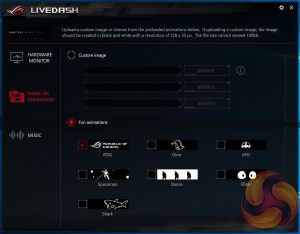 The new addition for the Maximus X Formula is software called LiveDash. This allows for the onboard OLED display to be configured to show a defined range of system parameters (hardware monitoring type functions) as text or show a monochrome image or animation. Users can upload a custom image or animation or pick from a range of pre-loaded options.

The music function turns the audio output into a EQ waveform animation on the display. LiveDash is a novel addition to the ROG range and offers additional customisation and personalisation options. The fact it is low resolution (128×32) and monochrome reduces its functionality but it’s still an innovative inclusion. 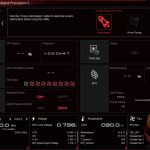 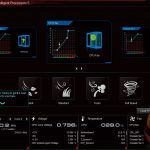 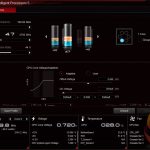 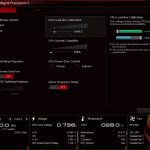 The main software utility for the ASUS motherboard range is the multi-function AI Suite III. It contains within it a significant number of utilities including the EPU and TPU, the Turbo App for core and application-specific turbo behaviour, Fan Xpert 4, on-the-fly overclocking support, a cleaning utility and an ASUS software updating tool. 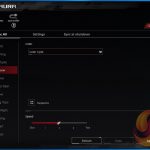 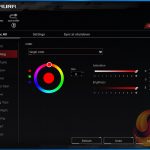 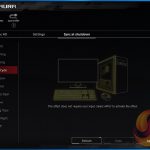 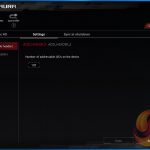 ASUS has overhauled the design of its AURA RGB software since we assessed it with Z270. Gone is the confusing use of the word “Independent” for what was Shut Down LED behaviour, ASUS has now labelled it as such.

The range of LED modes is still the same but the way LED strips are captured and managed as separate entities is an improvement on the previous AURA software whereby a strip was just treated as another zone on the motherboard. Note the “Add Strip” option along the top. With the Maximus X Formula you can add up to four more strips, two of the RGB type and two of the digitally addressable type.

AURA is capable and functionally useful but we’d perhaps like to see some integration with LiveDash, which could only happen if ASUS made the OLED display RGB rather than monochrome, 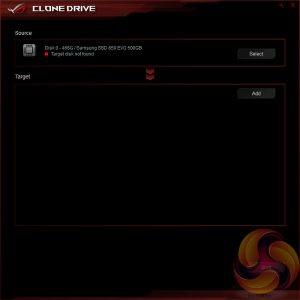 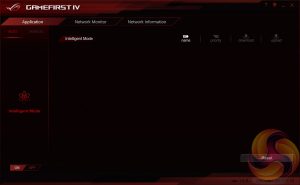 The ROG GameFirst software is now at version IV and supports Multi-Gate Teaming technology and Intelligent mode when used with Windows 8.1 and Windows 10 64-bit. Multi-Gate teaming allows the onboard WiFi to be used at the same time as the Wired LAN to maximise network throughput, as well as the ability to prioritise different applications to different interfaces. For example gaming applications can take priority usage of the wired connection while torrent downloads could be pushed to the wireless.

ROG Clone Drive is an ASUS disk cloning utility similar to what many other imaging programs offer, such as Macrium Reflect. It has less functionality than specialist disk imaging solutions so it is probably worth passing over. 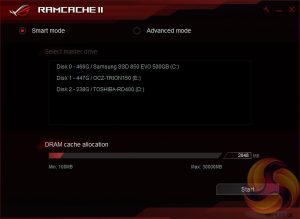 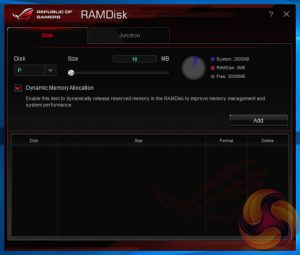 The ROG RAMCache II software, which complements pre-existing ROG RAMDisk software, aims to help with program loading and file transfers of regularly accessed data. Users simply need to set aside the amount of RAM they would like for caching and the RAM Cache II software handles everything else behind the scenes when in Smart mode. There is an advanced mode that gives some additional parameters for controlling the software’s behaviour.

ROG RAMDisk serves a different function, effectively creating a new system disk from RAM which the user can use in Windows Explorer to deposit files on as they so wish. RAMCache II, by contrast, reserves an amount of system memory to use as a cache and what files are written to that are largely application controlled.