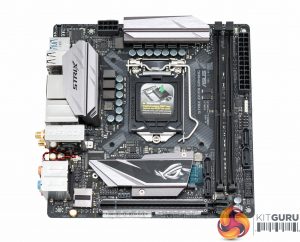 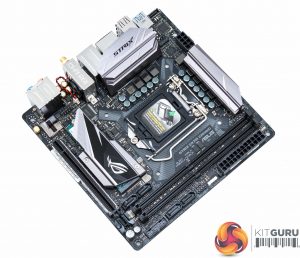 ASUS has always excelled with the aesthetics of its motherboards and the ROG Strix Z270i Gaming does not disrupt that trend. There are two VRM heatsinks with sharp angular designs plus another quirky looking chipset heatsink, the so called “double-decker” design. The whole colour scheme is neutral, focusing on black and grey, which works well with the ASUS AURA RGB lighting system.

RGB is provided as a configurable multi-zone setup but at a high-level it's really just a single RGB strip underneath the 24-pin edge of the motherboard. That strip is, however, configured into four individual sections, comprising 3 LEDs each, that can be controlled independently of one another. Plus users can use their own RGB LED strip for further customisation capability.

The layout is complex and busy, but well thought out. Along the 24pin-side ASUS provides debug LEDs, a 12v G R B header, front panel connections, two SATA ports and a USB 3.0 header. Near the chipset you'll find two more SATA ports and a shielded PCIe slot, the ASUS SafeSlot. 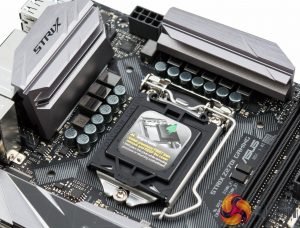 Around the CPU socket is a CPU fan header and 8 pin EPS connector while the AIO_PUMP header is located directly next to the CPU heatsink closest to the rear I/O. The system fan header is sandwiched between the chipset/M.2 heatsink and the PCIe slot. 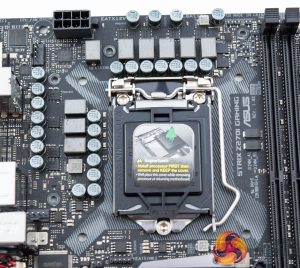 The power delivery system for the ASUS ROG Strix Z270i Gaming seems to be virtually identical to the Gigabyte Z270N-Gaming 5. That's a 6 phase design for the CPU, operated by a custom ASUS Digi+ VRM IC marked ASP14008T. Then there's a further two phases which contribute to the iGPU or other CPU components.

Each of the CPU MOSFETs are PowerPhase, Dual N-Channel units which combine the low-side and high-side FETs into a single package. These are capable of 20 and 32 Amps, high- and low-side, respectively, which is plenty for even the most heavily overclocked Kaby Lake CPU.

Dotted around the underside of the motherboard are an assortment of Richtek ICs to help regulate the voltages, but from the labelling alone it's not clear which parts are being used. ASUS also deploys a number of Nuvoton ICs to regulate and monitor the fans and temperature inputs including NCT6793D and 3949S. 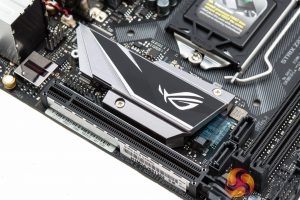 The ASUS Double-Decker heatsink is one of the niftiest motherboard innovations to be developed for tackling the problem of M.2 drives that thermal throttle.

MSI tried something similar with its M.2 heat shield but that is too big for the mini-ITX form factor and has been shown to be ineffective in some testing environments. The ASUS solution is more elegant since the heatsink cools both the PCH and an M.2 drive. 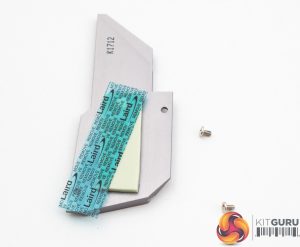 A couple of screws removes the top portion of the double decker heatsink and then a protective seal on a pre-fitted thermal pad needs to be removed before installing an M.2 drive.

The thermal pad will then help remove heat from the M.2 drive, passing it into the main heatsink which will mean the M.2 can dissipate heat at a faster rate than on its own relying on ambient airflow.

The rear I/O is among the best in its class in terms of sheer numbers. The full complement of audio connections is available alongside an impressive eight USB ports. However, keep in mind that none of these are USB 3.1 while rival motherboards have two USB 3.1 ports. As such, it means the USB Type-C port is only USB 3.0 speed and to get USB 3.1 you need a case or case accessory that supports the ASUS USB 3.1 front panel header. These are available but they are not cheap. 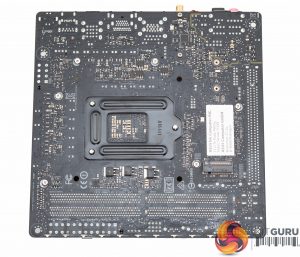 Underneath the ASUS motherboard is the second M.2 slot and a glimpse at the 12 LEDs which are split into four groups of three. All screws underneath the motherboard are easily removable so maintenance and modifications are simple to carry out.