The main software utility for the ASUS motherboard range is the multi-function AI Suite III or Dual Intelligent Processors 5. It contains within it a significant number of utilities including the EPU and TPU, the Turbo App for core and application-specific turbo behaviour, Fan Xpert 4, on-the-fly overclocking support, a cleaning utility and an ASUS software updating tool.

The functionality of the new ASUS automated overclocking utility is also built into this ASUS application, for those with a desire to make use of it. 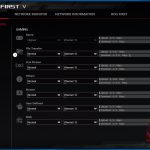 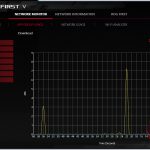 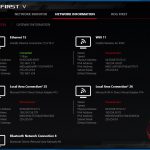 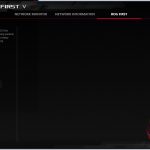 GameFirst V is the latest iteration of the ASUS network management software, launched alongside Z390. It’s functionality hasn’t changed a great deal since iteration 4 – it’s still packet prioritisation and traffic shaping software. It supports Multi-Gate teaming which allows the WiFi and wired connections to be used at the same time, and to prioritise different applications to use each for different things. It sounds novel but most people are hampered by the speed of their internet connection before the way their PC manages network traffic.

This is how ASUS describe the latest iteration: “GameFirst V is the ROG-exclusive tool that optimizes network traffic for faster, lag-free online gaming. Team your gateways, keeps tabs on bandwidth-hogging apps and make adjustments on the fly.” 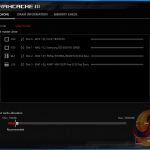 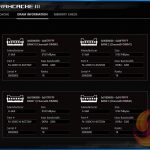 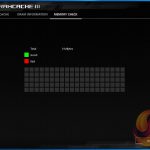 ROG RamCache III has also moved on to a new generation with Z390, up from version II prior. Not much appears to have changed aside from the addition of a memory testing application and a different graphical user interface. The ROG RAMCache III software aims to help with program loading and file transfers of regularly accessed data.

Users simply need to set aside the amount of RAM they would like for caching and the RAM Cache III software handles everything else behind the scenes when in Smart mode. There is an advanced mode that gives some additional parameters for user-control of the software’s behaviour if smart mode doesn’t suffice. 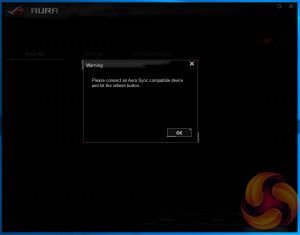 The ASUS AURA RGB software provided on the product page just didn’t work during our testing, we tried all versions available on the ASUS product page, the version on the ASUS utility DVD and tried each of those in combination with all the UEFI versions available on the product page. The error message we recorded each time was “Warning, Please connect an Aura Sync compatible device and hit the refresh button.” – clicking the refresh button made no difference.

ASUS UK worked with us to try and troubleshoot the issue but they were unable to replicate it and according to their testing the motherboard we had used worked fine with AURA software version 1.07.22. Even after being sent a second sample and using a clean install of Windows 10, we were unable to get that software to work. 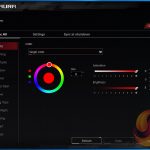 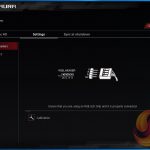 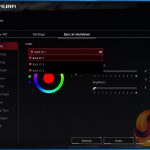 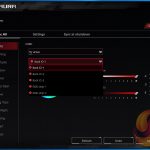 After scouring through the Republic of Gamers forums we came across a post that suggested older versions of AURA RGB had less problems and worked where newer versions did not. The version in question was 1.06.17 and it worked a treat, the direct download link to this version is here should you encounter the same issues as we did.

Compatibility problems aside, the functionality of ASUS AURA RGB is fine and works as expected, though we are unsure if version 1.07.22 brings significantly more benefits or features over 1.06.17.

The ASUS AURA RGB software has gone through several iterations of redevelopment since KitGuru first assessed it and it is now a fairly slick application. The range of LED modes available to choose from is comprehensive and LED strips can be managed independently of the onboard LEDs.

The settings tab details a few more compatibility options such as for calibrating RGB LED strips, integrating a Hue Bridge (Phillips Hue product integration) and the “Sync at “tab allows users to specify the “turned off” (standby power after shutdown) behaviour of the motherboard’s RGB LEDs.