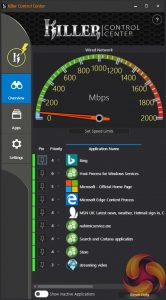 The Killer Control Centre software is distributed to the MSI MEG Z390 ACE through the Microsoft Windows App store. It’s a fairly standard packet prioritisation software specifically designed for Killer’s latest generation of Network Interface Controllers, most users will get by fine without it. 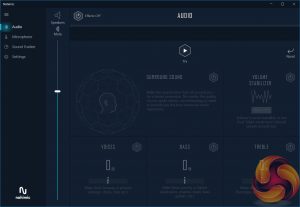 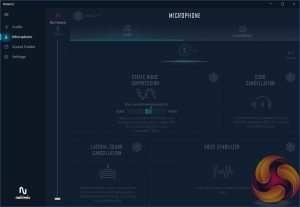 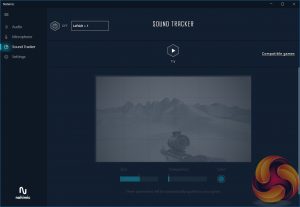 MSI has been bundling Nahimic software with its motherboards for a while now and it is really aimed at users who like to manipulate audio with after effects and processing. The Nahimic software is handy and has a number of tools to alter the audio or recording, there’s even an ASUS Sonic Radar alternative in the form of Nahimic Sound Tracker. Strangely enough we discovered that the third-party developers for MSI Nahimic and ASUS Sonic Studio are the same company – A-Volute.

On the MSI MEG Z390 ACE the only major change is that Nahimic is now distributed as a Universal Windows Platform (UWP) app, through the Microsoft Windows App store, 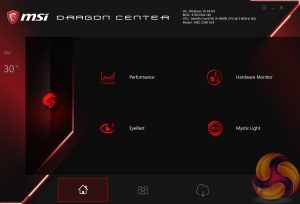 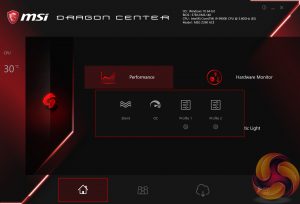 MSI has changed approach once again with its software, ditching “App Manager” which acted as the coordinating dashboard for all installed MSI software on a system. Dragon Center takes the place of App Manager and integrates a number of different functions and legacy MSI software.

The Performance tool offers power and performance profiles, or pre-defined system profiles. Most users will overlook this section and set their own overclocking profiles from within the UEFI environment.

The GameBoost overclocking profiles can be toggled within the custom profiles menu of the Performance section (Profile 1 and Profile 2, by clicking on the settings cog) as well as on-the-fly overclocking, voltage changes and fan tuning. The performance section holds all the functionality previously offered by MSI’s Command Center. 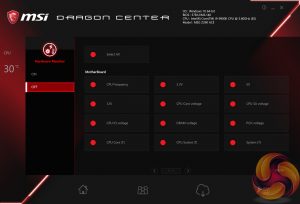 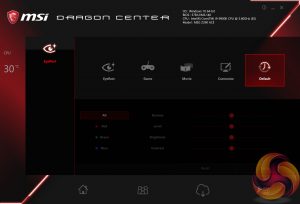 EyeRest is an alternative to Windows Night Light or F.lux, aiming to reduce the blue light burden on eyes that can prevent proper sleep cycles after computer usage.

Hardware Monitor is as it sounds, it offers a list of various system information data feeds relating to various frequencies and voltages. 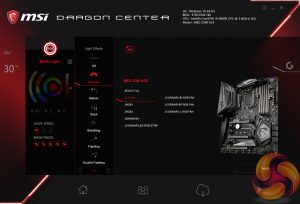 Mystic Light has been re-designed since the Z370 generation, it is now a much simpler software package to use with clear zone segmentation and a plentiful list of lighting modes. 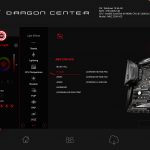 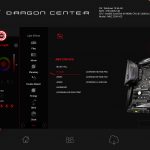 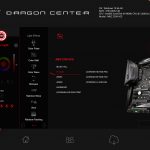 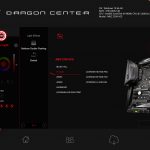 There are five different pages of lighting modes available in the Mystic Light interface. 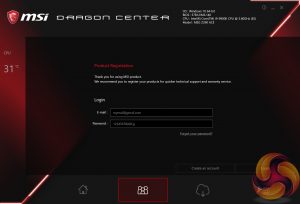 The Product Registration windows allows the user to register their MSI motherboard to an MSI account for easier support and warranty services. 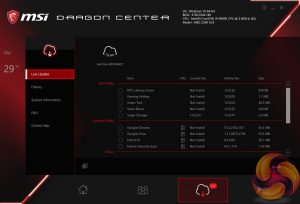 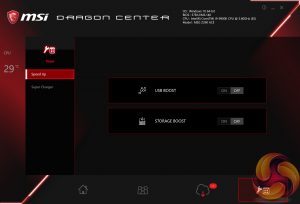 Live Update, like Mystic Light, has been integrated into the Dragon Center software package. From the Live Update section it is possible to pull in additional MSI packages like DPC Latency Tuner and Gaming Hotkey. The functionality of Live Update is still broadly the same – to help keep MSI utilities, motherboard drivers and the BIOS up to date.

Lastly is the tools section of Dragon Center which includes the Super Charger functionality (speeds up USB charging for Apple devices) and USB/STORAGE boost which were previously incorporated into the MSI X-Boost software.