To test the MSI Z370 PC Pro motherboard’s CPU overclocking potential, we set the CPU vCore no higher than 1.3V and push for the highest stable clock speed. We maintain the DRAM frequency at 3200MHz to take memory stability out of the overclocking equation. Once the highest clock speed for 1.3V is achieved we see if there is potential to roll back on the voltage while maintaining system stability. 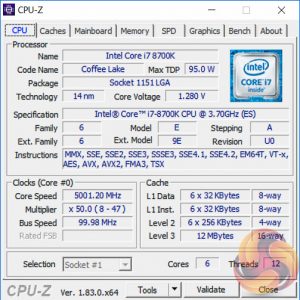 Overclocking delivered peculiar results on the MSI Z370 PC Pro. Firstly, with regards to frequency there were no issues achieving 5GHz using 1.275 volts as we have done on almost all other Z370 motherboards, we tried backing the voltage down further but experienced instability and 5.1GHz wasn’t possible without exceeding our chosen 1.3v limit. 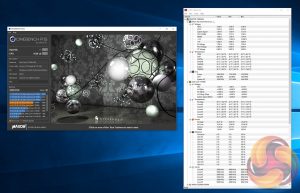 However, performance when overclocked to 5GHz @ 1.275 volts was actually worse than with stock Turbo behaviour and we regularly saw Cinebench results around 1380 points at this frequency, when our stock testing achieved 1421 points. As the above left image demonstrates this is because of frequency throttling, during the Cinebench run the frequency dropped as low as 3.9GHz despite being overclocked to 5GHz.

The explanation for this is that the throttling was power-based throttling and by choosing an overclocked voltage of 1.275 volts, which is higher than the stock Turbo voltage of about 1.2 volts, the frequency has to be reduced further to stay within power constraints. Thus the best result we could achieve, that improved upon stock Turbo performance, was by using 4.8GHz with 1.22 volts.

MSI commented to us that this motherboard has by default a “95W Power Limit and 200A Current Limit” which it implements on all its “four phase CPU Core VRM” Z370 motherboards when using “95W CPUs”. It does so to prevent VRM overheating which it says can happen when using 4.8GHz and 1.275v vCore or higher under extreme stress tests like Prime 95 small FFTs.

By applying some “potentially unsafe in the long-term” modifications to the power limit we were able to circumvent MSI’s restrictions and achieve normal 5GHz performance results in Cinebench (see above right). This is, however, not recommended as MSI sets these power limits for a reason – it knows what the VRM implementation is capable of. 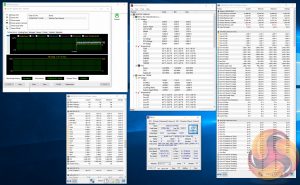 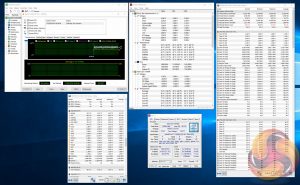 In terms of VRM thermal sensors there was a “MOS” sensor indicated in the UEFI which seemed to map to TMPIN5 within Windows. As a general rule the VRMs didn’t get hot – they barely surpassed 70 degrees Celsius. We verified that the frequency throttling wasn’t caused by overheating VRMs too by disabling the over-temperature protection on the VRMs in the BIOS, which had no impact on performance.

The above images of 4.3GHz stock Turbo performance (left) and 5GHz @ 1.275v (right) show the frequency throttling that takes place in an interesting way. For the 10-minute AIDA64 system stability test the average frequency for the stock scenario (4.24GHz) was actually higher than the overclocked scenario (4.11GHz). 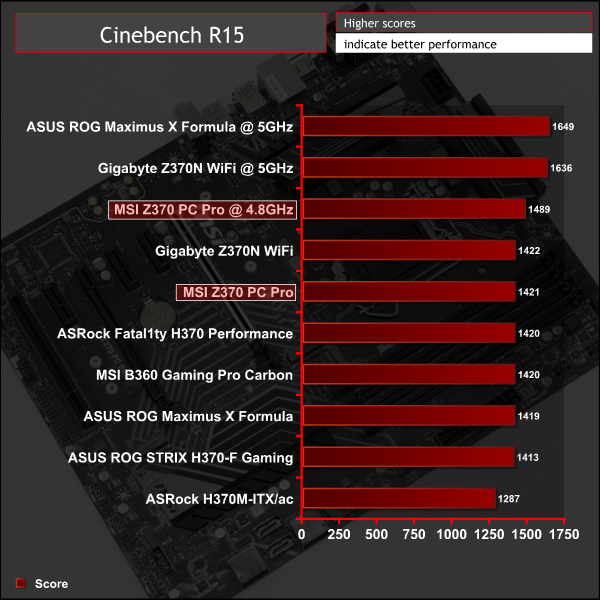 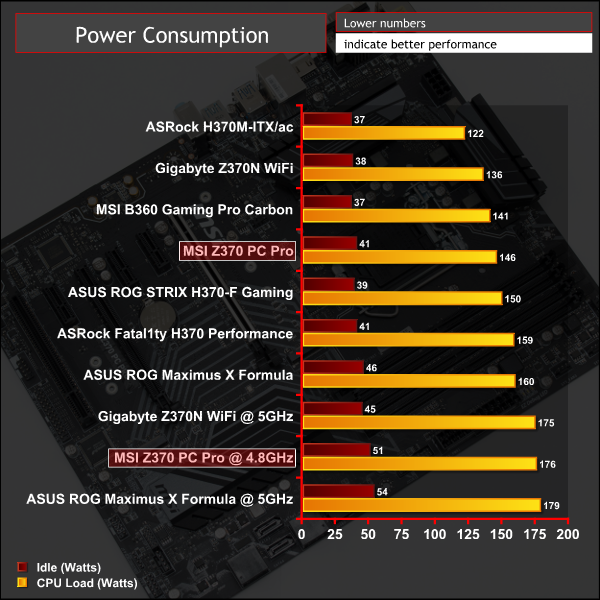 Power consumption reflects the voltages used for stock and overclocked load scenarios and aligns to other Z370 motherboards.