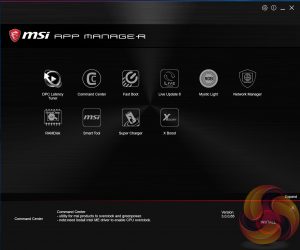 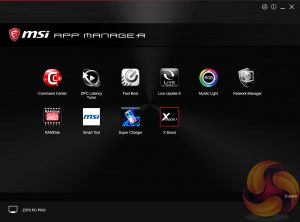 MSI has made a wise move for its software portfolio by introducing the MSI “App Manager”. It is a sensible idea to have a single application that pulls together MSI’s wide range of optional motherboard utilities. Gigabyte has long done something similar with its “APP Center” software and now that MSI has joined in on the action we’d be surprised if ASRock and ASUS didn’t follow suit. 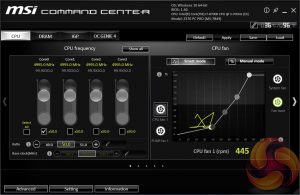 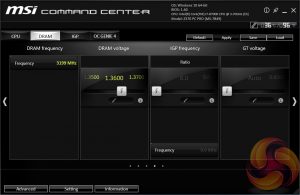 Command Center is the Windows performance tuning software for the MSI Z370 PC Pro with on-the-fly overclocking tools for the CPU, DRAM and iGPU, as well as fan controls. The virtual Game Boost button can also be toggled from within here but we find for the effort required users are better off doing some quick research to overclock their CPU since MSI has to overestimate the voltage to account for variations across all CPUs which usually results in considerably more voltage than is necessary being applied. 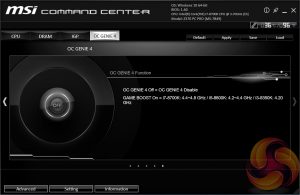 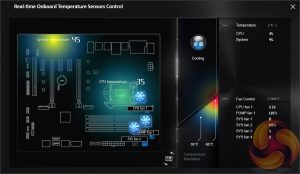 Under the Advanced sensor settings there is a nice visualisation provided of temperatures across the motherboard, there’s also more detailed recording and monitoring functionality available including system alerts under the Setting and Information sections. 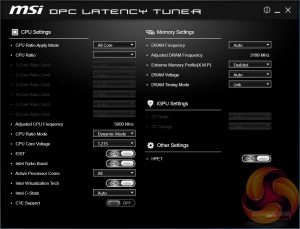 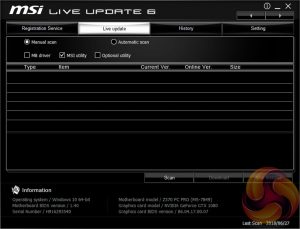 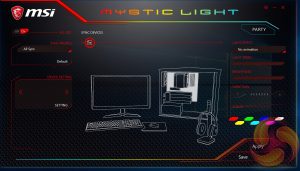 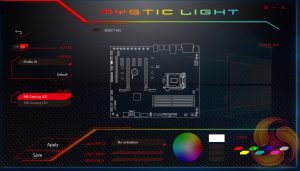 MSI Mystic Light is the main LED controlling functionality for this motherboard. The user is able to access a wealth of additional lighting modes and colours by expanding out to the secondary window by selecting the “Setting” option under the Device Setting on the launch page. This motherboard has just a single RGB zone for configuration but an optional 12v GRB RGB strip can be added through the provided header. There is a long list of different lighting modes for controllable zones including ‘Off’, ‘Breathing’, ‘Flashing’ and so on.

We had previously referred to “buggy behaviour” in MSI’s Mystic Light software that makes it difficult to access the secondary motherboard device setting page. After further analysis we discovered the culprit to be the following:

The Mystic Light application will only open the motherboard device setting page when the “MB” icon under “Sync Devices” is white. This means even if you have MB selected in the “Device Setting” box and click the “Setting” button it will not work without that white MB Icon under Sync Devices.

The unintuitive user interface aside, the core functionality and controls are all there for MSI’s software to effectively control the onboard LEDs. 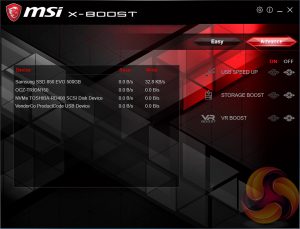 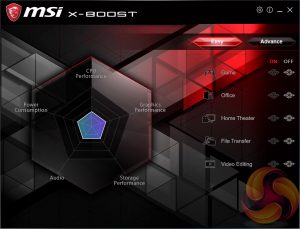 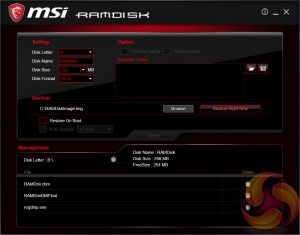 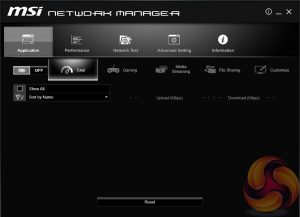 RAMDisk is probably more useful on X299 where up to 128GB of RAM is supportable making RAM Disks of genuinely useful capacities possible. However, we tested this with a 4GB RAM Disk in a previous review and achieved read and write speeds in the realm of 14GB/s, for reference the fastest M.2 NVMe drives will do around 3.5GB/s (for now, at least).

MSI’s Network Manager, called Gaming LAN Manager on Gaming series products, is a repackaged cFos product that lets you enable packet prioritisation rules for software on the host system. It has a number of baked-in profiles for different usage scenarios including streaming, gaming and file sharing. 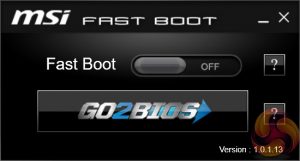 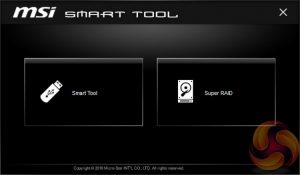 MSI Fast Boot toggles a number of UEFI settings that speed up the POST of the motherboard during booting. 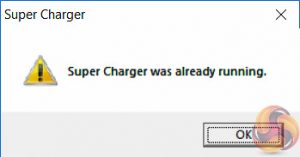 Super Charger has no visible interface to display since it just speeds up USB charging for Apple devices.