The platform is provided by High Power and it appears to be a new design. It looks good since there are no power transfer cables blocking airflow and the clearance between the components is also adequate, to allow for optimal heat extraction. In particular the secondary side is quite spacious, given the max rated capacity of this unit.

The regular sized PCB plays a big part in this, since High Power didn’t downsize it to make the unit smaller. Smaller PSUs are definitely easier to install, especially in chassis with restricted internal space, however when you install the same number of components in smaller PCBs, you need increase airflow to remove the heat, which inevitably leads to higher noise output levels.

The build quality is very good, reminding us of top-notch OEMs like Flextronics, Delta and Seasonic. It is nice to see High Power showing its true potential when it comes to build quality at least, since in the performance section improvements are still needed to reach the top contenders. In the primary side a half-bridge topology is used along with an LLC resonant converter. We would like to see a full-bridge topology in a high capacity unit like this one.

In the secondary side we find the typical stuff for a modern PSU – a synchronous rectification scheme for +12V and a pair of DC-DC converters for the minor rails. As a side note, we appreciate the use of a proper rectifier IC for the -12V, something that is absent even in some high-end platforms from other OEMs. This rail can still bring down the entire unit if it breaks, so it needs the best possible protection.

The PCB right behind the AC receptacle hosts two Y and one X caps along with a discharge IC, whose markings were erased so we couldn’t make it the model number. 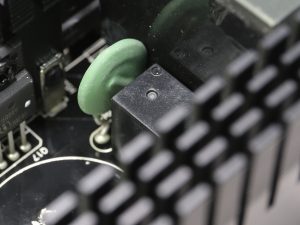 It isn’t common for High Power to use NTC thermistors in its implementations, so it is nice to see those included with this platform. Not only did they install a NTC thermistor, but they have also supported it with a bypass relay.

The APFC converter uses two Infineon IPW60R099P6 and a single CREE C3D10060. The bulk caps are provided by Nichicon and their combined capacity doesn’t allow for a longer than 17ms hold-up time. In actual fact, the registered hold-up time is much lower, at 10.3ms.

The APFC controller, a Infineon ICE3PCS01G, sits on the same daughter-board with the supervisor IC, a SITI PS232S.

The main switching FETs are two Infineon IPA60R099P6, configured in a half-bridge topology. The LLC resonant controller which handles the main FETs along with the +12V ones is the popular Champion CM6901X. The latter is installed on a small vertical board. 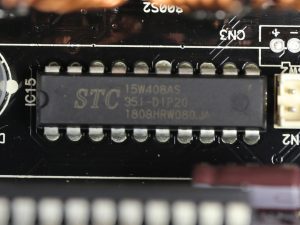 There is a micro controller, a STC 15W408AS, which most likely handles some of the unit’s protection features. 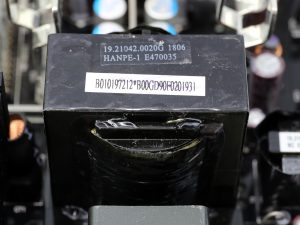 The unit’s main transformer is quite small, given the max rated capacity of this platform.

The small heatsinks in the secondary side are used to cool down the FETs that are installed on the solder side of the main PCB, eight APEC AP4N1R8CMT-A.

The electrolytic filtering caps are provided by Chemi-Con and belong to its W and KY lines. There is no information about the W caps since those are custom made according to the customer’s requirements, however there is no doubt that the KY caps are of high quality. Besides electrolytics, a large number of polymer caps from Chemi-Con and FPCAP, are also used.

At the front side of the modular board polymer caps provide an extra ripple filtering layer. At the rear side the soldering quality is good, but there are no multi-layer ceramic capacitors (MLCCs) which are ideal for high frequency ripple.

The pair of DC-DC converter utilizes eight APEC AP3R303GMT-HF-3 and the common PWM controller is a Anpec APW7159C. 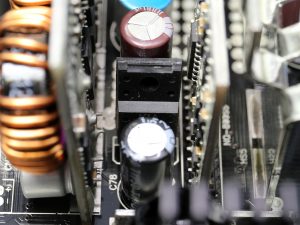 The soldering quality is impeccable- High Power did a great job in this area.

The fan’s model is RL4Z B1352512HH. It is made by Globe Fan and it uses a double ball-bearing fan, which has high tolerance to increased operating temperatures. This is a mid-speed fan which is controlled by quite a relaxed speed profile. The power transistor used by the fan’s control circuit, is a STi 2SD882.