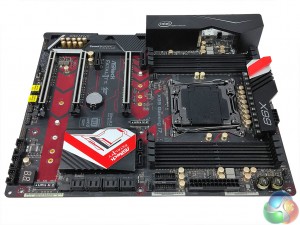 ASRock has continued the red and black theme of past Fatal1ty branded products but the styling has definitely been toned back to a more neutral colour scheme. Gone are the red DIMM and PCIe slots, in its place is more subtle red accenting on the motherboard PCB like ASUS also uses on its Z170 motherboards.

That said, given current motherboard market trends ASRock are perhaps limiting their audience by not offering a more neutral colour scheme with customisation options. Rival vendors have successfully used 3D Printing, RGB lighting, stickers, carbon fibre wraps and detachable pieces to give prospective buyers more customisation options. ASRock offers none of the aforementioned with this product which is a little disappointing. 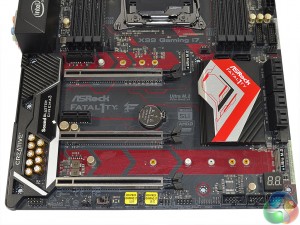 Connectivity along the lower edge of the board is busy – HD Audio, a clear CMOS jumper, a BIOS selector switch, front panel connectors, TPM, COM and USB.

The BIOS chips have an unsightly yellow sticker on them which most buyers should consider removing to improve the aesthetic appeal. There’s also a debug code reader and the first M.2 slot located in this same area.

The two PCIe 1X slots are Gen 2.0 and get bandwidth from the chipset. 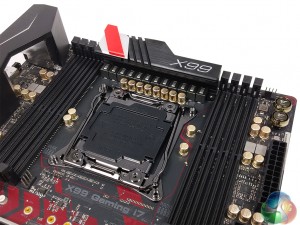 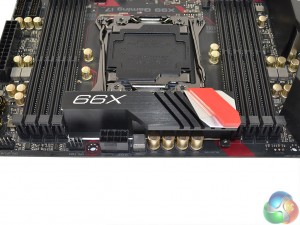 The CPU socket has a 12 phase hybrid-digital VRM solution and draws in power from a CPU EPS 8 pin connection. Capacitors in proximity to the CPU socket are ASRock’s gold-coloured 12,000-hour (12k) rated units. 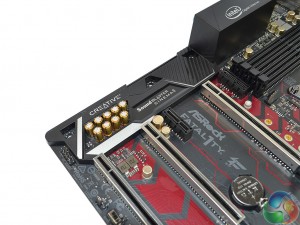 The Audio is provided by a Realtek ALC1150 codec that is unshielded and sits underneath the “Gaming Armour” on a isolated PCB. Nichicon Fine Gold Series capacitors and a Texas Instruments NE5532 headset amplifier further enhance the audio system. 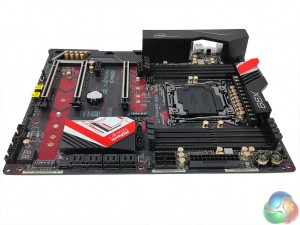 Storage connectivity is provided through 10 SATA ports, of which two are shared with SATA Express, and two M.2 ports.

Both M.2 ports support SATA and PCIe devices, though when a 28-lane CPU is used the first M.2 socket (M2_1) supports only SATA type devices. The M.2 ports also support the optional ASRock U.2 kit but this is sold separately and not included as standard.

The antennae mounting points for the integrated WiFi module are also found in the rear I/O. Disappointingly, the WiFi solution is only rated at 433Mbps, which is significantly lower than the 867Mbps+ solutions we have seen on competing motherboards. 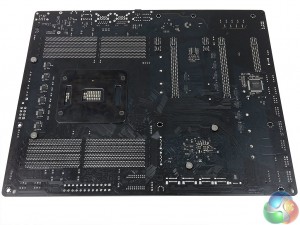 Underneath the motherboard all heatsinks are secured with standard Philips screws meaning easy removal for cleaning or installing waterblocks. There aren’t any PCB reinforcement plates underneath as ASRock likely believes that the 8-layer PCB negates the need for this.