It was only a matter of time before SSD drives got a funky RGB lighting scheme – after all the technology has somehow made it into every other area of a PC, so why not a drive? Whether you take a look at the flashing multicoloured lightshow and wonder the point or if you just love the technology, it's pretty much here to stay by the looks of it.

Kingston's latest 2.5in SSD, the HyperX Fury RGB is one of the very rare breed (at the time of writing) of drive that has RGB built in. 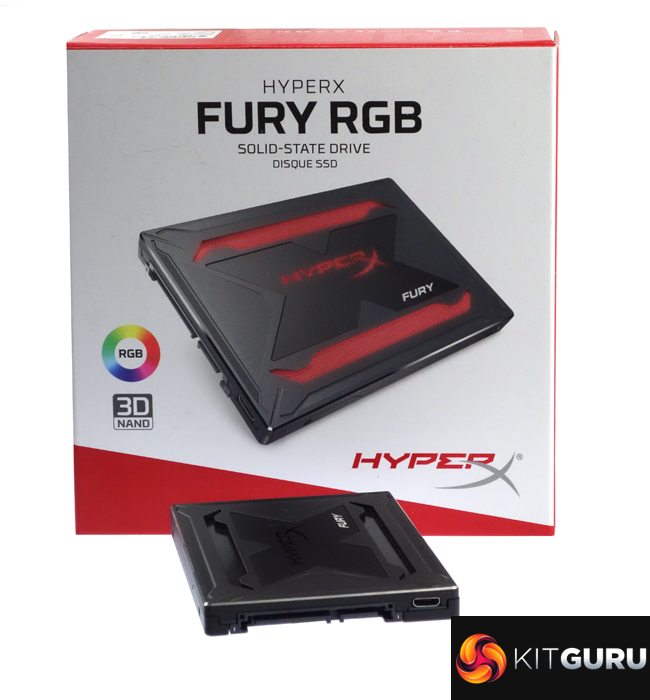 The quoted Sequential performance of the HyperX RGB is pretty much what you would expect for a SATA interfaced SSD using a four channel controller and 3D TLC NAND; up to 480MB/s for reads and 500MB/s for writes. Using the ATTO benchmark we were able to squeeze a bit more out of the review drive, especially when it came to read performance at 563MB/s while the tested write performance came in at 531MB/s.

All those 75 LEDs inside the drive keep it nice and toasty when it's being pushed. With our test system just ticking over the drive was recorded at 27°C but when it was running our 4K read/writes tests this increased to 46°C. This may not sound like much but the previous Kingston drive we tested, the 960GB UV500, uses the same type of NAND and controller combination and was 25°C on idle and only reached 32°C when performing the same 4K read/write tests.

The upgrade version of the HyperX Fury RGB 480GB that Kingston supplied for this review costs even more at £146. Kingston needs to shave a fair bit of the price to make the drive competitive regardless of the RGB technology.

Kitguru says: If Kingston's HyperX range is all about high performance then the HyperX Fury RGB is a bit of an odd fit. Its performance doesn't match up to the visual impact of the RGB and it's the RGB that adds quite some premium on the price.