Before going into detail about the system configuration and how I tested the mini PC, I must first mention a quirk of the X2 – in particular, of the 32GB model.

Namely, the X2 ships with Windows 8.1 installed. Fair enough, the X2 may have been manufactured before Windows 10 released, that’s no problem as you can upgrade for free until July. However, the measly 32GB of internal storage proves troublesome, as there is not enough space for Windows 10 to download alongside the already-present Windows 8.1. So I had to download Windows 10 to a USB and install from there. Quite a faff just to get the latest version of Windows. 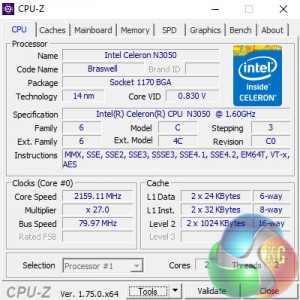 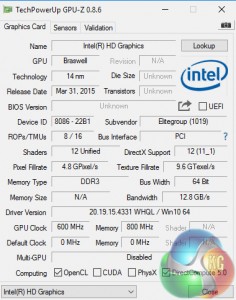 Anyway, above you can see the CPU and GPU overviews, courtesy of CPU-Z and GPU-Z respectively. The CPU is the Celeron N3050 from the Braswell family, with a 1.6GHz base clock which turbos to 2.16GHz. The integrated graphics are known only as ‘Intel HD Graphics’ – which seems rather ominous for graphical performance. Still, expectations are not high so we will wait and see.

I compare the X2 against its predecessor the LIVA X, as well as the Dell Inspiron 15 7599 laptop and my personal desktop system with a Core i3-4160 and GTX 960 at its heart. Obviously I am not comparing this Braswell mini PC like-for-like with the i7-6700HQ-powered Inspiron laptop – it is just to measure relative performance.

I also used 2013’s Tomb Raider as a game for testing the X2’s graphical prowess.