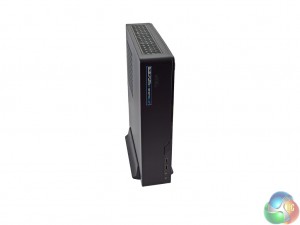 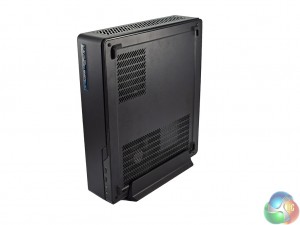 Built in the Fractal Node 202, the Styx is a very sleek and stylish system. We reviewed the Node 202 last year, and it is definitely worth pointing out just how small it is. Measuring 385mm x 332mm x 125mm, it is undoubtedly the smallest desktop case I have ever seen in-person.

On the sides of the case are mesh grilles – to aid air ventilation. Two of these grilles are covered by dust filters – one for the CPU cooler, another for the sole intake fan on the base of the case. 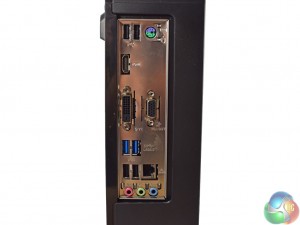 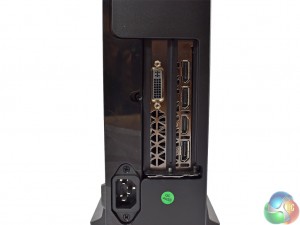 Above you can see the motherboard I/O panel, as well as the connectors on the graphics card.

The motherboard has a limited array of ports, but this is to be expected from a budget mini-ITX board. The graphics card (GTX 960) has the standard array of 3x DisplayPorts, 1x HDMI and 1x DVI connector. 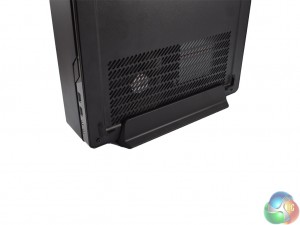 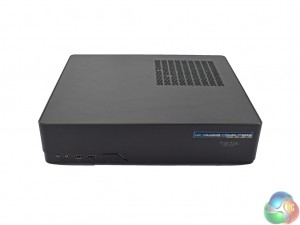 While the Node 202 does come with a supporting stand to allow the case to sit upright, it can also rest horizontally on four rubber feet. This means it can be positioned however you want – perhaps horizontally under a TV (like a games console or DVD player), or vertically as with traditional PCs. 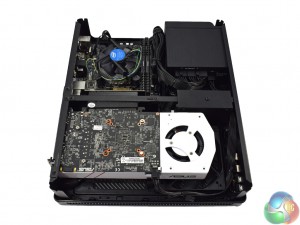 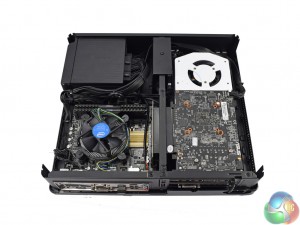 Once four screws are removed from the base of Node 202, we get a first look at the innards. The Node 202 uses a ‘dual-chamber’ design, with the bulk of the components situated in the top half of the case. The GPU sits on its own in the bottom half.

On first impressions, too, UKGC has done a very good job with cable management. The case is so thin there is really nowhere for the cables to go, but they are neatly cable-tied together and tucked away between the RAM and PSU, leaving the motherboard easy to access. 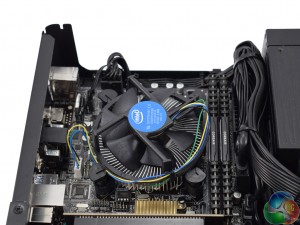 The Styx uses an Intel Core i5-6500, clocked at 3.2GHz. The motherboard is an Asus H110I-Plus Mini-ITX board, while 2x4GB of 2400MHz Corsair DDR4 fills both RAM slots. While the H110 board does not support RAM speeds faster than 2133MHz, meaning the the 2400MHz Corsair RAM will have to run slower than specified, UKGC have assured us money has not been wasted.

Rather, UKGC are able to get the faster RAM for the same price as the 2133MHz memory, so going for the faster kit means users have better hardware should you carry the RAM over to a different system.

Another point to note is the locked CPU. I think the i5-6500 is a sensible choice in such a small case. An i5-6600K obviously allows better performance via overclocking, but this also produces extra heat – which is very hard to deal with in a case as small as the Node 202. The i5-6500 provides a good compromise by giving solid performance without causing the Node 202 to get too toasty.

Because the i5-6500 runs cooler, use of the Intel stock cooler is not an issue. Granted, it is not especially pretty, but the Node 202 does not have a window – so it is not on show. As our temperature testing shows, it can get the job done – and saves cash that would have gone on a third party cooler. 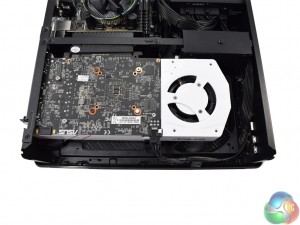 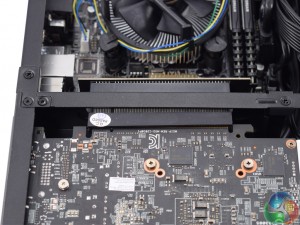 Above we get a closer look at the GPU, a Nvidia GTX 960. This particular model is the 2GB Asus Turbo. It connects to the motherboard via a PCIe riser card, allowing the card to be mounted vertically in its own chamber. This keeps the two hottest components in a build (the CPU and GPU) well away from each other, enabling the Node 202 to better dissipate the components’ heat.

The Turbo GTX 960 uses a blower-style cooler, which is another sensible choice. These cards intake air and run it over the GPU before emptying it outside the case – which means the hot air is not left circulating through the case, as with other graphics cards. In a case as small as the Node 202, this a wise move as there are no exhaust fans. The GPU leaving hot air in this case would be terrible for the thermal safety of the components. 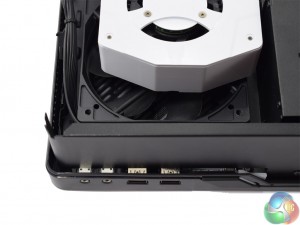 Just under the GPU is the sole intake fan, which directly feeds the graphics card. 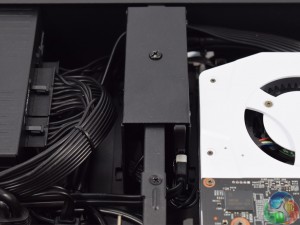 The Samsung Evo 850 500GB SSD is housed in the dual-2.5inch mounting bracket, which you can see above. 500GB should be enough for a living room machine, and I would much rather have a bigger SSD than add in a 2.5inch hard drive – I find 2.5inch HDDs are tediously slow and fairly noisy. The Node 202 does not allow the mounting of 3.5inch drives. 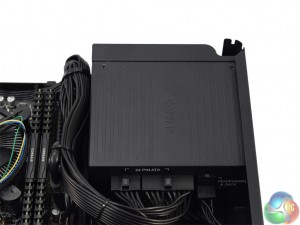 Finally, the power supply is the Corsair SF 450. We reviewed it here along with its bigger brother, and found it to be a very capable power supply. In my experience, the fan on the SF 450 did not spin at all, even under the heaviest load I could put the Styx through. This is because power draw from the Styx is relatively low, as we will come to later. 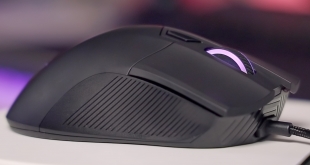