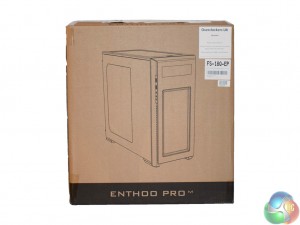 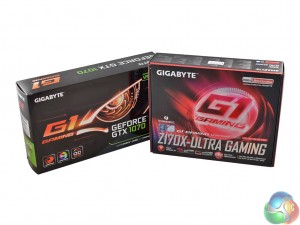 Given the Overclockers UK Neuron system is built in the Phanteks Enthoo Pro M case, it is only natural that the PC is delivered in that case’s box. Incidentally, you can read/watch our review of the case HERE.

Along with the case box, you also get the graphics card and motherboard boxes – these just contain some useful extras (such as SATA cables, manuals and driver discs) that you may want down the line. 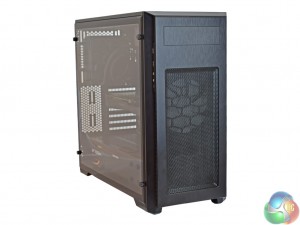 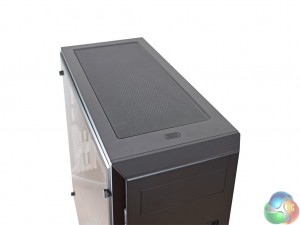 Here we get our first look at the case itself. Funnily enough, the AWD-IT Aura system I reviewed a week-or-so ago (review HERE) also uses the Enthoo Pro M case – but with a tempered glass side panel. The OCUK Neuron uses the same case but with an acrylic side panel.

It still looks great and enables you to get an unobstructed view of the PC, but obviously the acrylic panel is not quite as sturdy as glass, nor does it feel as premium.

Elsewhere, the front of the case features a mesh panel to allow lots of airflow, while a full-length dust filter is included to cover the top panel. 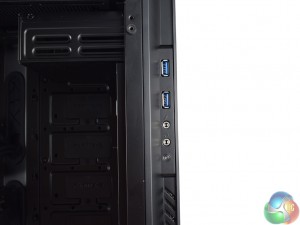 While we are at the front of the case, the I/O is positioned just on the side of the front panel. It consists of 2x USB 3.0, as well as the usual headset jacks. 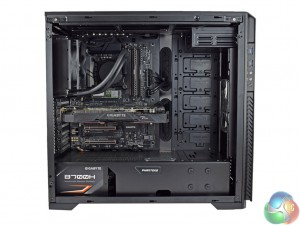 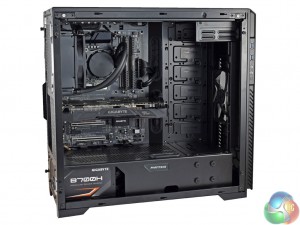 Taking off the side panel, we get a good look at the build itself.

Clearly, Overclockers UK have done an excellent job of building the PC. The cables are expertly routed, with the bare minimum of wires on display. Even then, the cables are all-black – so they are very stealthy when they are on show.

In fact, everything is black. The only dash of colour comes from the power supply sticker. Personally, I like this minimalist approach as too much colour can be gaudy. If you do like some colour, though, do not be put off just yet – Overclockers UK include some red LED strips (which you can see below), the motherboard has some red LEDs dispersed around its PCB, and the graphics card features an RGB LED logo. 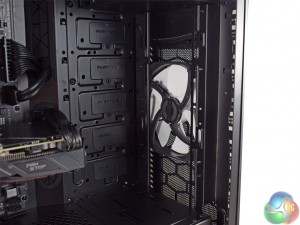 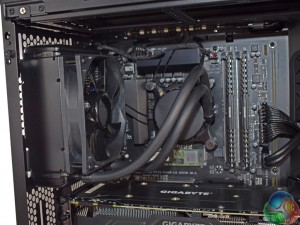 To take a look at the components, then, I like to start with the cooling system employed.

Overclockers UK have kept the stock Phanteks 140mm intake fan at the front, and it is positioned to push air directly over the graphics card.

Keeping the CPU cool is an OCUK TechLabs 120mm AIO watercooler. The OEM for this unit is Asetek – in fact, I would be 99% confident in saying the cooler used here is identical to the Arctic Liquid Freezer 120 we took a look at over HERE. Either way, it has a thick radiator which should hopefully keep the i5-6600K in check.

Incidentally, that CPU is overclocked to 4.5GHz using a 1.35 Vcore. 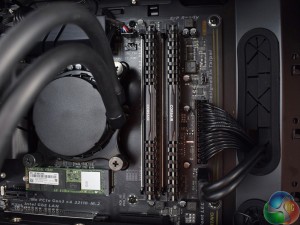 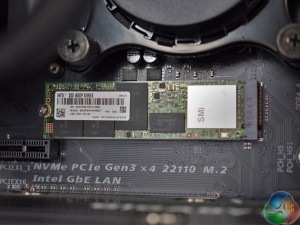 Next to the cooler are the 2x8GB modules of Corsair Vengeance LPX 3000MHz DDR4 memory. Using two DIMMs allows the memory to be upgraded later – and the memory is very fast, too, which is good to see.

Just below the CPU waterblock is the NVMe SSD. With a 256GB capacity, the Intel 600p is a budget PCIe SSD – but it can still offer speeds far higher than what a SATA 3 SSD could achieve. It is also worth noting the same SSD is used by Cyberpower in their Infinity X55 VX PC – you can see how it performed HERE. 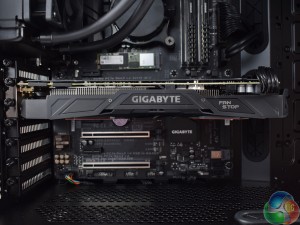 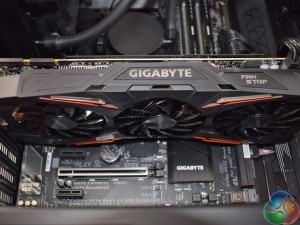 Moving down we get a look at the graphics card. OCUK have used the Gigabyte G1 Gaming GTX 1070 here – and while we have not reviewed this specific card, we have looked at the G1 Gaming GTX 1080. You can read our review of it over HERE.

Both cards use the same, triple-fan cooler while the Gigabyte logo is illuminated by some RGB LEDs which are user-configurable.

Incidentally, the Gigabyte Z170X-Ultra Gaming motherboard supports SLI, so you could even add in another card in a few years to improve your gaming experience should you wish. 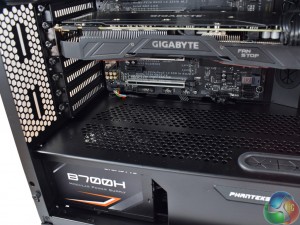 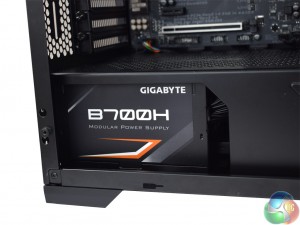 At the bottom of the case, Phanteks have included a full-length, mesh power supply shroud. The shroud features a number of cut-outs for front panel connectors, too, which enables OCUK to ensure the wires are barely visible.

The power supply used in the Neuron is the Gigabyte B700H – clearly there is a strong Gigabyte theme running throughout the build! The B700H is obviously rated at 700W, and is a semi-modular, 80 Plus Bronze rated unit. 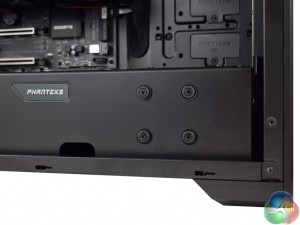 Also on the power supply shroud is a mounting position for a 2.5in SSD. This has not been used for this build, given the Intel 600p SSD is of the M.2 form-factor. However, if you want to add in a 2.5in SSD later, it could take pride of place here. 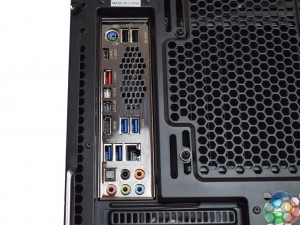 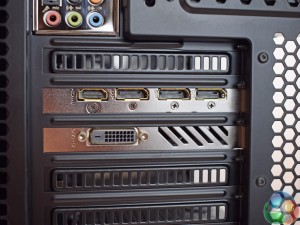 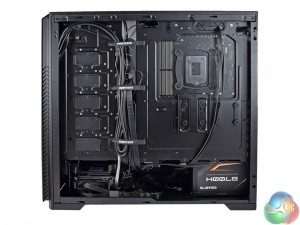 Next, we take off the second side panel to get a look behind the motherboard tray. Here, cable management is also excellent. The included Velcro straps have been utilised well, meaning the rear is very tidy.

Incidentally, in the bottom left corner, you may be able to make out the included 2TB hard drive. A Seagate drive, there is also a spare drive caddy above it if you want to expand the storage later. 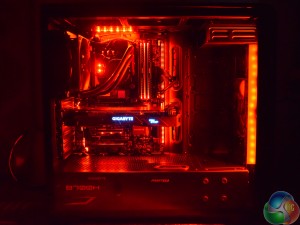 Lastly, the above image shows the system lighting when switched on.

The red LEDs compliment the black components very well, and the integrated motherboard LEDs are very funky as well – 2016 really has been the year of ‘RGB all the things.’