This week, Cyberpunk 2077's long-awaited Patch 1.2 went live, bringing with it hundreds of bug fixes and gameplay tweaks. This update also enabled the use of ray tracing with an AMD GPU, meaning anyone with an RX 6000-series graphics card will now be able to enjoy the full array of ray traced lighting effects in the game. We benchmark every RDNA 2-based GPU to find out how just how well Big Navi can perform when ray tracing is enabled.

In this article, we’re only focussing on the raw performance of the GPUs, rather than a visual assessment of what ray tracing brings to Cyberpunk 2077. We have already looked at the visual differences, as well as DLSS image quality, in a previous piece of content back at the game's launch, which you can find over HERE.

We tested all of the GPUs at 1080p, 1440p, and 4K resolutions. First we tested using the Ray Tracing Medium preset, which enables ray traced shadows and medium lighting quality, but we also tested using the Ray Tracing Ultra preset which adds in ray traced reflections and bumps lighting quality to ultra. For further analysis, we benchmarked each of the ray traced settings individually to see how performance scales across the various settings, finishing with a look at DLSS performance. 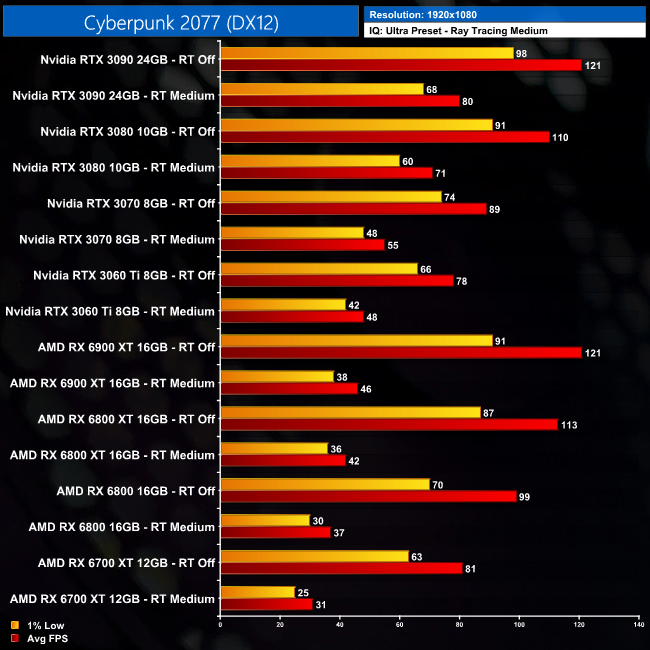 The first thing I noticed from our first chart is that not even AMD's flagship RX 6900 XT is able to hit 60fps at 1080p, using medium ray traced settings. In fact, it averaged 46FPS in our testing, a reduction of a whopping 62% compared to playing without ray tracing at all, and remember this is only the medium ray tracing preset, meaning there’s still some ray traced settings that haven't been enabled!

Elsewhere, both the RX 6800 and RX 6800 XT are averaging in the high 30s to low 40FPS region, which I’d say is just about playable, but enabling ray tracing still results in frame rate drops of over 60% for both GPUs. The RX 6700 XT, however, saw its 1% lows drop down to 25FPS, so that’s not what I’d call playable – it’s certainly not enjoyable – and to stress the point again, this is only 1080p medium ray tracing settings. 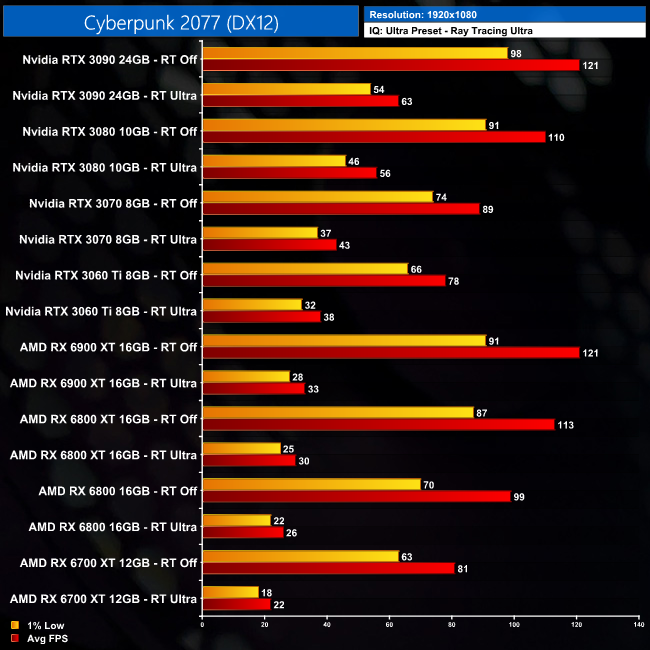 Sticking at 1080p but using the Ray Tracing UItra preset, things look even worse for AMD GPUs. Here, not even the 6900 XT can hold above 30FPS at all times, with its 1% lows dropping to 28FPS. The 3060 Ti is actually 14% faster than the 6900 XT at these settings, and that’s without even factoring in DLSS which would significantly increase that margin, as we will see below.

In fairness, Nvidia’s GPUs do also suffer big drops in performance when ray tracing is enabled, but that drop off is nowhere near as severe as we see from the AMD cards. Using these settings, the 6900 XT performs 73% worse than it does with no ray tracing at all, whereas the performance hit for the 3060 Ti is 51%. It's certainly still very significant, but it is not as drastic as the drop off for AMD GPUs while the 3060 Ti can also call on DLSS to help speed things back up. 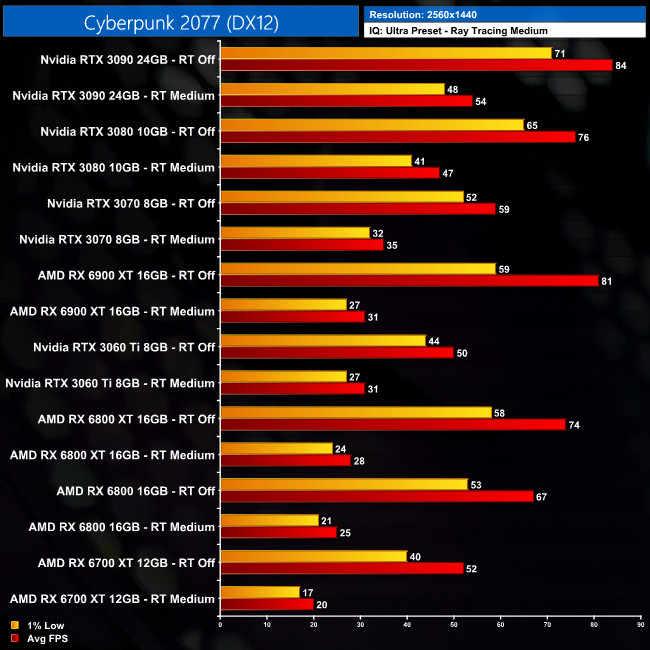 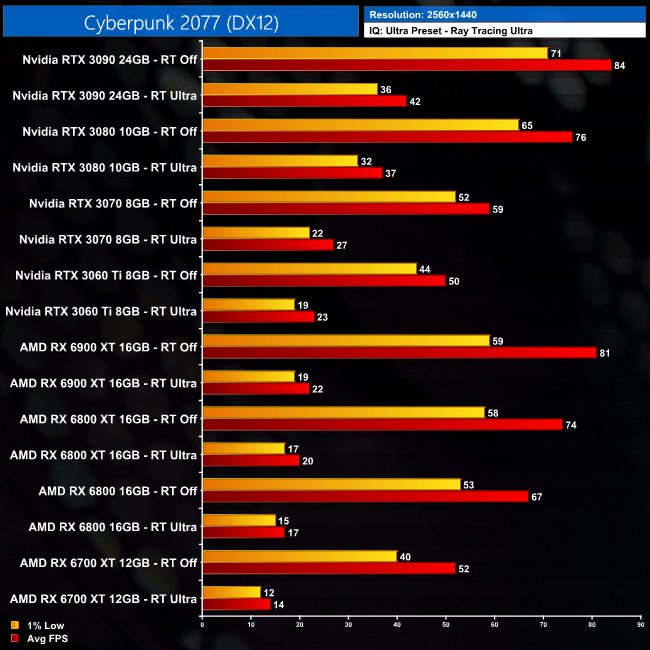 Stepping up to 1440p with the Ray Tracing Ultra preset is really just more of the same… the AMD GPUs are getting hammered here, with the RX 6900 XT seeing its average frame rate drop off by 73% compared to playing with ray tracing disabled, so it hits an average of just 22FPS. No doubt about it, these settings are demanding for any GPU, as only the RTX 3080 and RTX 3090 are able to average above 30FPS using these settings – but once more, that is before DLSS is turned on, which is a real game changer for the Nvidia GPUs. 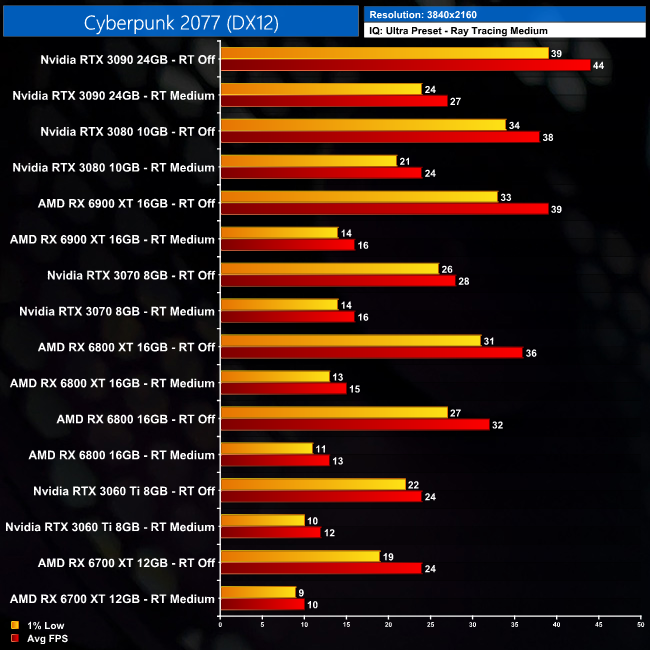 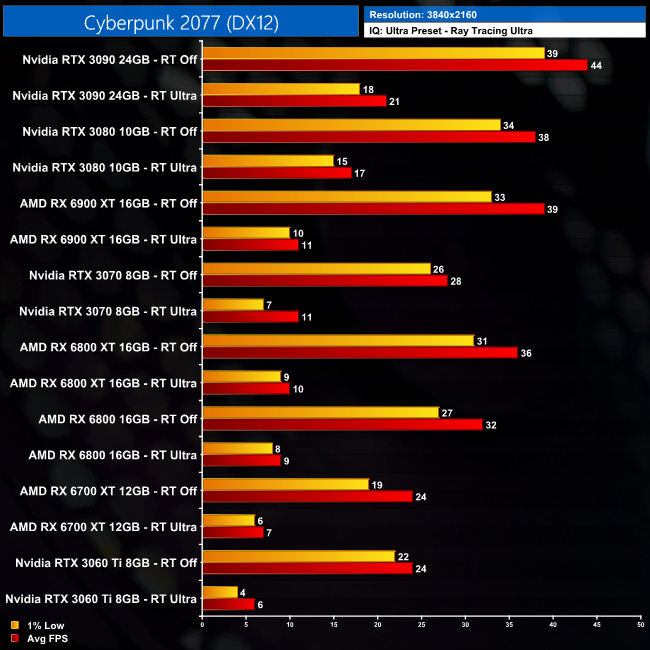 Tackling both the 4K benchmarks together, no GPU – not even the RTX 3090 – is capable of even just 30FPS when playing the game at 4K with ray tracing enabled. That is, of course, talking about native 4K, when anyone with an Nvidia GPU wanting to play at 4K will enable DLSS, which is simply not an option for AMD GPUs until FidelityFX Super Resolution finally arrives. 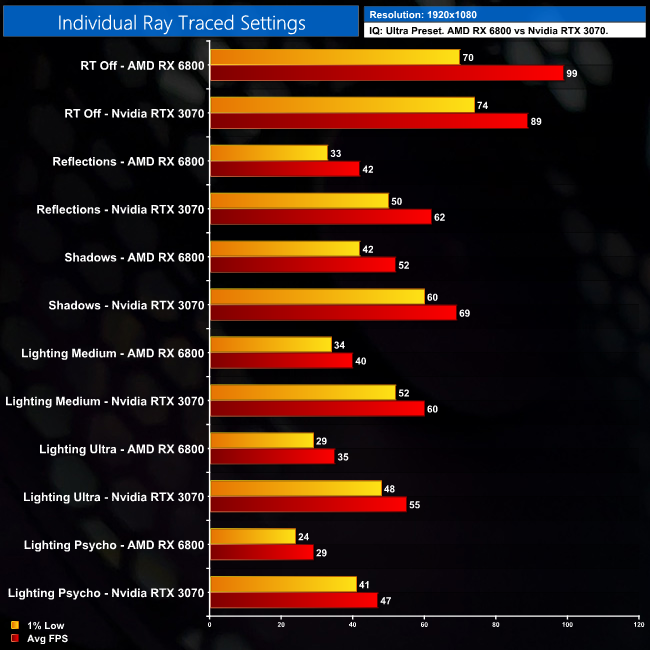 Within Cyberpunk 2077, there's three different types of ray tracing – reflections, shadows, and ‘lighting', the latter of which includes ambient occlusion, emissive lighting and global illumination. I benchmarked all of these settings individually to see the performance scaling of each one. This was done using the RX 6800, only at 1080p resolution, but we have also compared the performance to the RTX 3070.

The data shows that ray traced shadows are the least demanding of all the types of lighting in the game. Even then, they still cost 47% performance compared to playing without any ray tracing. Reflections are even more demanding, reducing performance by 58%, while enabling the Psycho mode for ray traced lighting will drop frame rates by 71% on its own.

Nvidia's performance lead in ray traced workloads is clear. Despite the RTX 3070 being the slower GPU in terms of rasterisation, it is anywhere from 33% faster when dealing with ray traced shadows, up to 62% faster when implementing the Psycho lighting mode. The more ray tracing work there is to be done, the faster – relatively speaking – the RTX 3070 gets compared to the RX 6800. 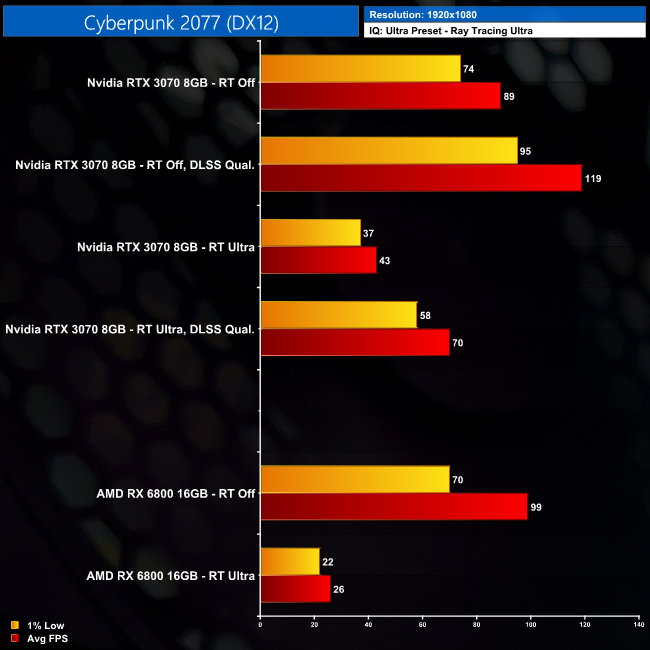 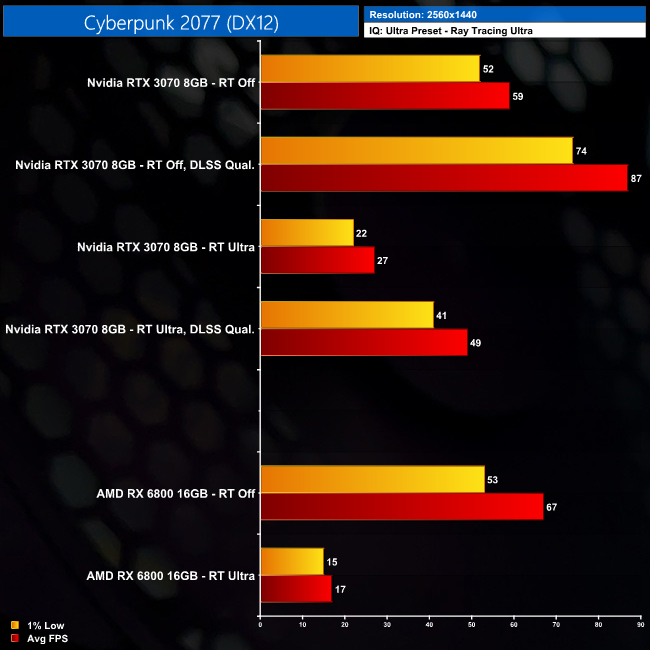 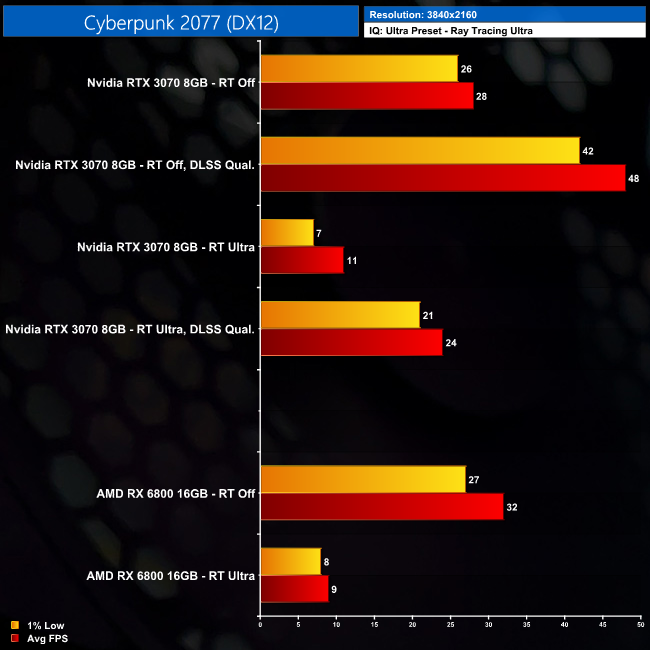 With Nvidia's RTX GPUs, native resolution isn't the only way to game. In fact, DLSS can make a huge difference to frame rates with very little in the way of image quality losses. For a closer investigation of the difference it makes to visual fidelity, check back on our previous Cyberpunk 2077 performance analysis.

What we can see from the data is that DLSS can transform the game from being unplayable when ray tracing is enabled (averaging under 30FPS at 1440p for instance), to being perfectly playable and enjoyable. At 1080p, using DLSS Quality in tandem with the Ray Tracing Ultra preset boosts performance by 63% compared to native resolution, and that increases to 81% at 1440p when using the RTX 3070.

The other factor of course is that DLSS can be used without ray tracing, just to enable higher frame rates if that is your preference.

There's a number of potential takeaways from this investigation, including the fact that no AMD GPU is capable of hitting 60FPS at 1080p, even just using the Ray Tracing Medium preset. The same can be said for 1440p, where not even the RX 6900 XT could hold above 30FPS at all times with ray tracing enabled.

What this data really says to me however, is just how much AMD needs a competitor to DLSS. That technology really is the difference in allowing Nvidia GPUs to play the game with ray tracing enabled, at decent frame rates. Nvidia GPUs are faster at ray tracing than AMD's GPUs to begin with, but even then, without DLSS I would be a lot less keen to recommend turning ray tracing on.

Without any form of upscaling technology right now – FidelityFX Super resolution is currently slated for a release ‘this year' – it's simply not worth enabling ray tracing in Cyberpunk 2077 if you have an RDNA 2-based GPU. Even by just enabling ray traced shadows, arguably the least visually impressive lighting mode, frame rates are effectively cut in half. Let's hope FidelityFX Super Resolution will arrive soon, and let's hope it is good.

KitGuru says: Nvidia undeniably has the upper hand for ray tracing in Cyberpunk 2077 – largely thanks to DLSS.