Earlier this year, Bethesda announced plans to launch the ‘Creation Club’ for two of its biggest games- Fallout 4 and Skyrim. In essence, this was Bethesda’s second attempt at paid mods but this time around, some much needed changes were in place, the biggest of which was the requirement that no previously free mod could be sold on the Creation Club. Unfortunately, it seems that Bethesda isn’t enforcing this as well as we’d hoped, as the Creation Club just went live for Fallout 4 and things aren’t looking good. 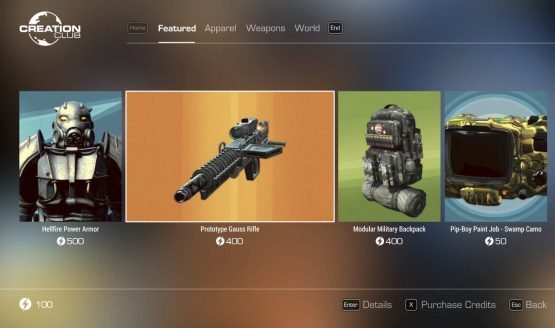 The Fallout 4 Creation Club went live with 12 mods to kick off the launch. Here is the complete list:

So after all of that talk about the Creation Club bringing exclusive content not available elsewhere for free, the first 12 mods on the store are in fact mods you can find elsewhere for free. In fact, the Hellfire Power Armor is one of the top files available on the Fallout 4 Nexus right now.

So the first round of mods aren’t particularly impressive but are the prices at least reasonable? Well no, unfortunately not. When you first join the Creation Club, you get 100 credits for free. For reference, the Hellfire armor costs 500 credits, weapons cost 400 and the paint jobs cost 50. Additional credits are bought in packs, starting at $7.99 for 750 credits. So with ten dollars, you wouldn’t even be able to buy some new armor and a gun.

Hopefully Bethesda will see community comments and make some adjustments but for now, the Creation Club seems like a complete rip off.

KitGuru Says: I’m all for mod creators joining the Creation Club to make some cash, as long as Bethesda sets prices at a reasonable level and ensures compatibility. $10 should get you a hell of a lot more than one weapon and a couple of shaders for your Pip-Boy. In fact, for that kind of cash, I’d expect much bigger/expansive mods and I'm willing to bet many others feel the same.