Valve opened up a can of worms last night when it announced that it would be allowing developers to sell their mods on the Steam Workshop, with no quality control, curation process, or guarantee of future support or compatibility. The main issue people seem to be having though, is just how large Valve's cut of the revenue is.

When a mod is sold on Steam, the creator only gets a 25 per cent cut of the sales, while Valve takes home 75 per cent to split between itself and presumably Bethesda. If a mod fails to make more than $100, then the creator doesn't get paid at all. 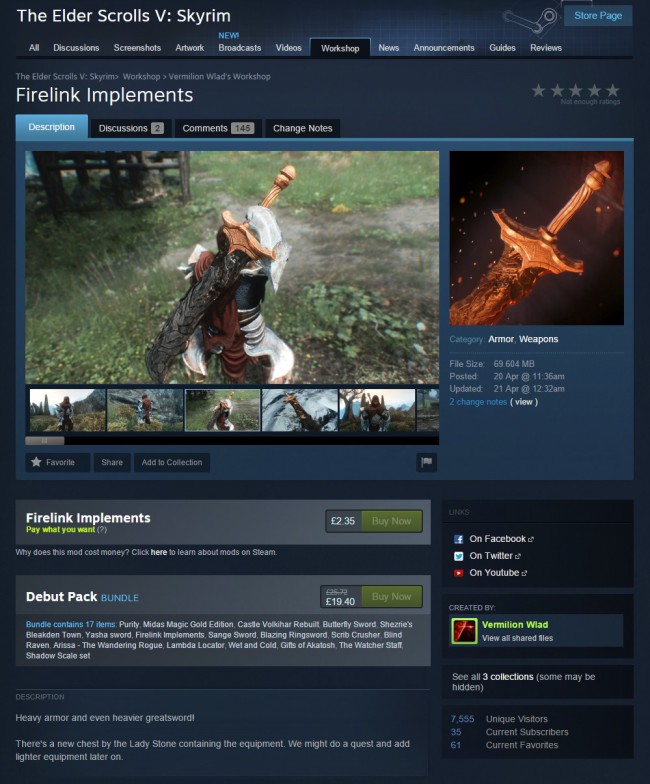 As you would imagine, the internet exploded with rage and less than 24 hours later, a Change.org petition has been born, with close to 40,000 signatures on record already. Unfortunately, the petition is aiming to remove paid mods entirely, rather than call for Valve to improve the program.

Modders work hard on some of their creations and honestly, with money brought in to the equation it is more likely that we will see talented developers strive to make big projects. Unfortunately, right now the selection of paid for mods on the Workshop are all pretty poor. We've already seen people try to pass off other people's work as their own and the revenue cut for creators is woefully small.

While this petition will get Valve's attention, it needs to change its message a bit. Anyone who works hard at something deserves to be compensated for their time and effort but there should absolutely be a standard in place. Nobody wants to buy weapon or armor skins for a single player game.

The simplest solution here would be to add a donation option to all mods on the Workshop. Then, select mods, such as those that add new characters, quest lines or gameplay overhauls, should be considered for the premium mod section. This way, Valve can ensure that paid for mods will be worth the money. Seriously, selling weapons and armor for a single player game is not going to cut it. A 25% cut for mod creators is not going to cut it and the poor refund policy currently in place is not going to cut it.

You can see the petition for yourself, HERE.

KitGuru Says: Valve trying to monetize mods is certainly a ballsy move. However, the company seems to have completely missed the mark. People clearly don't want to pay for mods but an encouraged donation would go a long way. Ensuring that all mods selected for the premium mod section were of a high enough standard would also do a lot to help the current situation.