As the launch date of Microsoft Corp.’s Windows 9 code-named “Threshold” approaches, more information about its peculiarities emerge. According to the latest reports, the next-gen Windows will not only return the “Start” menu to PC users, but it will also add support for virtual desktops and will drop the charms bar.

As previously reported, the Windows 9 “Threshold” is designed for all three major types of devices, such as personal computers, tablets and smartphones. At the same time, it is expected that the Windows 9 OS will contain significant changes designed to improve usability by users who are familiar with Windows XP, Vista and 7. In particular, Microsoft plans to return the fully-fledged (or nearly fully-fledged?) “Start” menu as well as run apps designed with Metro (Modern) interface in mind in windows.

Another advantage that the Windows 9 “Threshold” will have is support for virtual desktops, something that Apple’s Mac OS X and Ubuntu operating systems already feature, reports ZDNet. Virtual desktops will allow users to easily switch between groups of apps and therefore organize their PCs and workflow better. At present it is unknown whether support for virtual desktops will be mandatory for all devices. Since proper virtualization requires hardware support, compulsory support for this technology will boost hardware requirements for mobile devices. 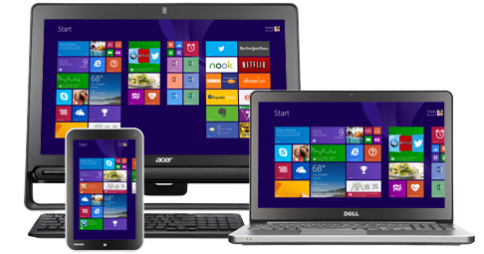 Another user interface change with Threshold is elimination of the charms bar, an overlay that currently provides access to search, sharing, the Start screen, hardware devices and settings. Some believe that the charms bar will remain for tablets, some assume that the overlay will be removed completely. According to ZDNet’s Mary Jo Foley, “modern” Windows 8 apps will get title bars that include menus that have the charms components listed.

Microsoft is rumoured to deliver a public preview of its Windows “Threshold” in the fall of 2014. The commercial version of the product is set to be released next year.

KitGuru Says: The biggest issue with Windows 9 “Threshold” is that it will correct some drawbacks of the Windows 8/8.1 operating system and will therefore feature many other downsides. To make the things even more uncertain, the Windows 9 will have to work on smartphones, tablets and PCs, support loads of software and provide consistent user experience on all platforms.