We tested all the router configurations – seven in total – exhaustively from eight different positions with three different WiFi clients. Where mesh systems were supplied as a pack of three, we also tested with just two satellites so you can see how much the third device improves coverage, if at all. The clients used were a Dell Latitude 5490, which sports WiFi 6, an MSI WS63 7RK notebook with 2×2 802.11ac WiFi, and an older HP Folio 13, which maxes out at 3×3 802.11n WiFi.

In each case, we used the freely available iPerf 3.1.3 software, which stresses a network by sending packets of random data and measures the throughput. One system acts as a server, and the other as a client, as data is sent between them. In all cases, we used an Armari AMD Threadripper workstation connected to the routers via Gigabit Ethernet as the server, so that the WiFi was always the slowest connection. 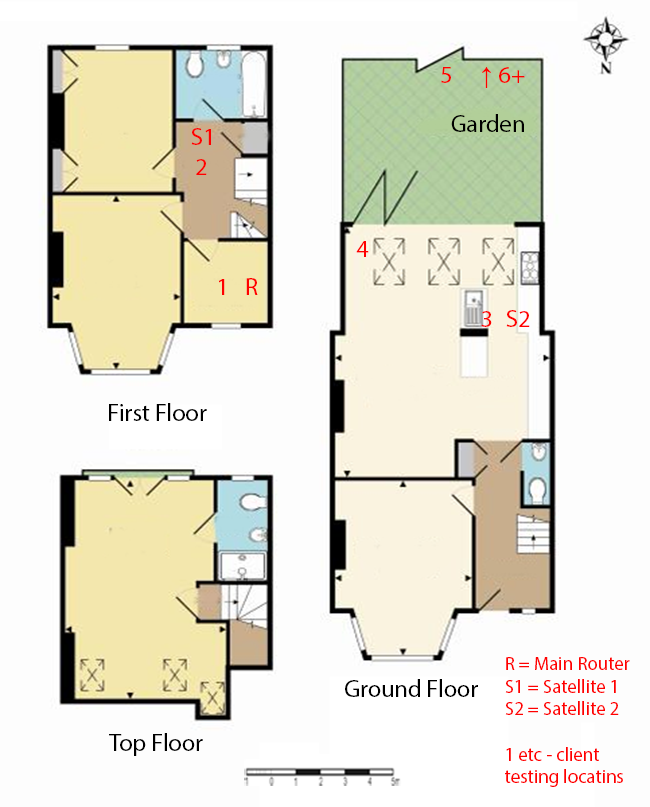 Location 1 was very near to the router, around 1m away. The next location – 2 – was around 5m away, with a wall in the way, but on the same floor. Location 3 was on the floor below, so had walls and a floor in between, but was a further 5m away. Location 4 was the last one actually inside the house. Locations 5 to 7 were then 5m further down the garden. Location 8 was only 2m further down, as this was the end of the garden, but also behind a shed, so posed a significant challenge that only a few mesh WiFi systems can cope with.

We should also say a few words about the location of the satellites. The routers were always placed in the same location, in the first floor study next to the broadband. In the case of three-unit mesh systems, the second and third satellites were placed at S1 and S2.

With two-unit configurations, the second unit was placed at S1.

We performed a total of 168 separate WiFi tests across all four products, seven configurations, and eight locations for each WiFi standard.

Note that for some tests we have included the NETGEAR Orbi AX6000 and AC3000 as a comparison, using earlier results as we no longer had these available to test again.