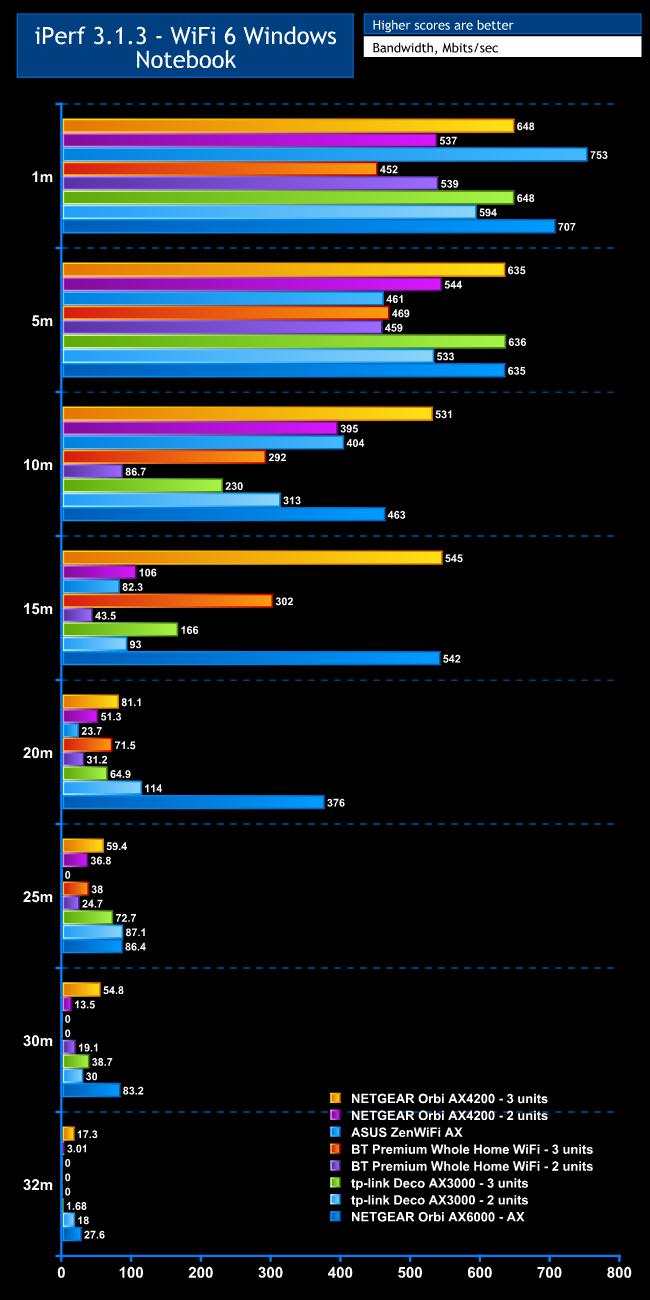 WiFi 6 clients are what you are most likely to buy a WiFi 6 mesh system for, so we started with these tests. In theory, WiFi 6 can go all the way up to 9.6Gbits/sec, but that requires 160MHz wavebands at 5GHz and eight spatial streams, which no current products provide. The fastest theoretical WiFi 6 throughput in this group comes from the ASUS ZenWiFi AX, which can hit 4,808Mbits/sec.

Moving out to 5m, the NETGEAR Orbi AX4200 with three units, tp-link Deco AX3000 with three units, and original NETGEAR Orbi AX6000 all perform nearly identically, deliverying 635 or 636Mbits/sec. With two units, the tp-link drops to 533Mbits/sec, and ASUS ZenWiFi AX to 461Mbits/sec. BT has fallen to 459Mbits/sec with two units, but goes up to 469Mbits/sec with three.

At 10m we’re starting to see some two-unit configurations start to drop off. The three unit NETGEAR Orbi AX4200 comes top with 531Mbits/sec, while the NETGEAR Orbi AX6000 manages 463Mbits/sec. The client here is on the lower floor, in the kitchen. The NETGEAR Orbi AX4200 is still doing well with two units, managing 395Mbits/sec, and the ASUS ZenWiFi 6 is holding up well at 404Mbits/sec. However, the BT three-unit configuration has dropped off noticeably to 292Mbits/sec, and the tp-link three-unit configuration has fallen to 230Mbit/sec. With two units, BT is already way behind on 86.7Mbits, but tp-link is strangely faster, managing 313Mbits/sec. We suspect this is due to it having two rather than three radios.

At 30m, strangely, the BT mesh has dropped off with three units but is still providing 19.1Mbits/sec with two. However, NETGEAR’s Orbi AX6000 is king at 83.2Mbit/sec, and the Orbi AX4200 second with 54.8Mbits/sec. The three-unit tp-link is still going strong at 38.7Mbits/sec, and so is the two-unit configuration with 30Mbits/sec. Two-unit NETGEAR Orbi AX4200 is hanging in at 13.5Mbits/sec.

With the 32m range, the client is also behind the garden shed, so we don’t expect many WiFi setups to do well here. However, NETGEAR’s Orbi AX6000 is still providing 27.6Mbits/sec, and the three-unit AX4200 17.3Mbits/sec. The two-unit tp-link also achieves a respectable 18Mbits/sec. Nothing else manages a usable bandwidth, two-unit NETGEAR Orbi AX4200 providing 3.01Mbits/sec, and three-unit tp-link just 1.68Mbits/sec. Everything else has dropped off completely.

Overall, then, NETGEAR’s Orbi AX6000 remains the king of WiFi 6, with the Orbi AX4200 also doing commendably well. It was a shame we only had two ASUS ZenWiFi AX units, because that setup started off well, but dropped off fast and couldn’t maintain range beyond 20m. BT’s Premium Whole Home WiFi does well up to 25m with three or two units, although three units provides much better bandwidth, as you would hope. The tp-link Deco AX3000 delivers odd results, doing better overall with two units than three, making you wonder if the three-unit bundle is worth the extra money.