We’ve come to expect a high standard of colour accuracy from all modern displays. In the past, using a colorimeter to calibrate a screen made an enormous difference to the image, 100 per cent sRGB coverage was a superb achievement, and we would praise screens for achieving a Delta E under three.

Now, with 10-bit panels capable of 1.07 billion colours, a Delta E under two or even under one is common. From IPS screens, 100 per cent sRGB, or a figure close to it, is the norm rather than the exception. There are few remaining frontiers that separate displays intended for high colour accuracy, such as the Dell UltraSharp U2715K (review HERE) from general-purpose IPS panels. High brightness levels above and Adobe RGB coverage over 90 per cent are two notable examples.

This is another way of saying the Asus PG348Q achieves results absolutely in line with most high quality consumer IPS displays, which is absolutely great to see.

As usual we cracked out the DataColor Spyder Elite 5 to measure the out-of-the-box colour accuracy of the screen, then calibrated it and measured the screen again.

Like the PG27AQ, on the default settings, the image appears ever so slightly shifted to the red spectrum, which is due to the default Colour Temperature being a user mode with the RGB settings set to 100. We left this setting on when testing, but subjectively, setting the temperature to ‘Normal’ results in a much cooler, whiter picture. In use, we much prefer this cleaner setting over the default mode. 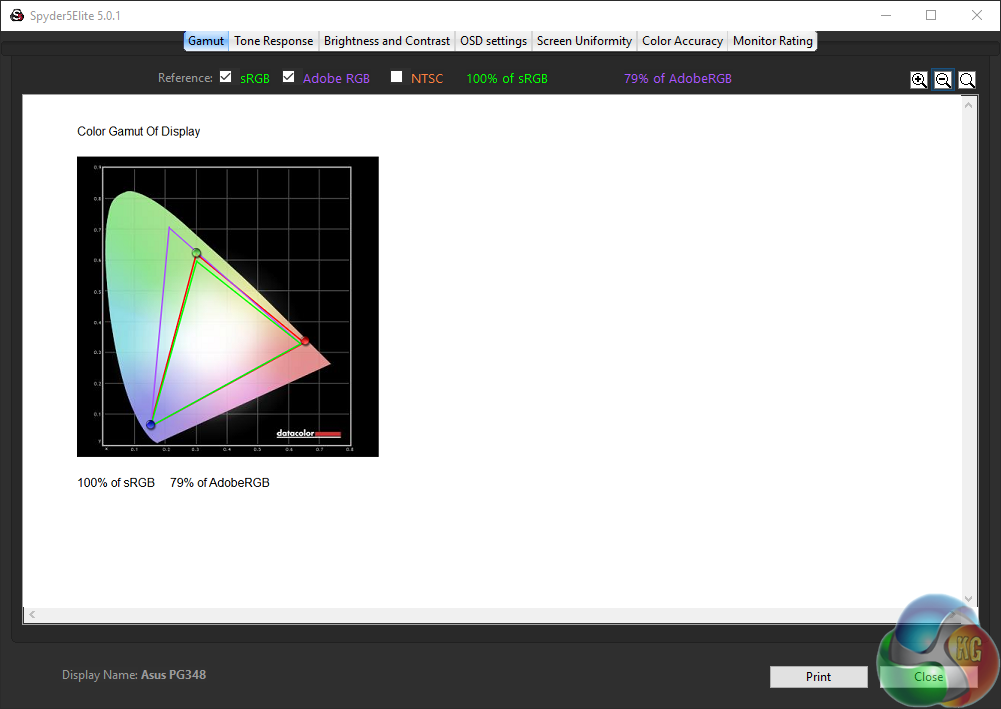 100 per cent sRGB and 79 per cent Adobe RGB are fairly normal for any IPS display.

Brightness distribution shows variance of up to 14.9 per cent at the top of the panel. That’s not a great result, but one we can live with, since this is a gaming display rather than one aimed at graphic designers. 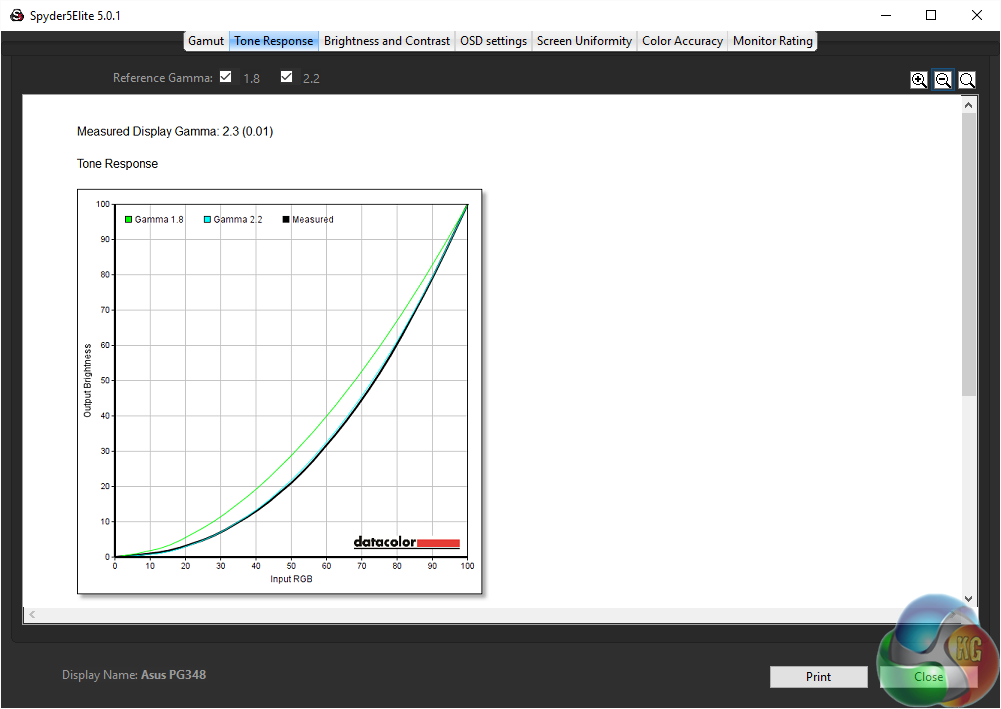 The default gamma is just off the 2.2 target. 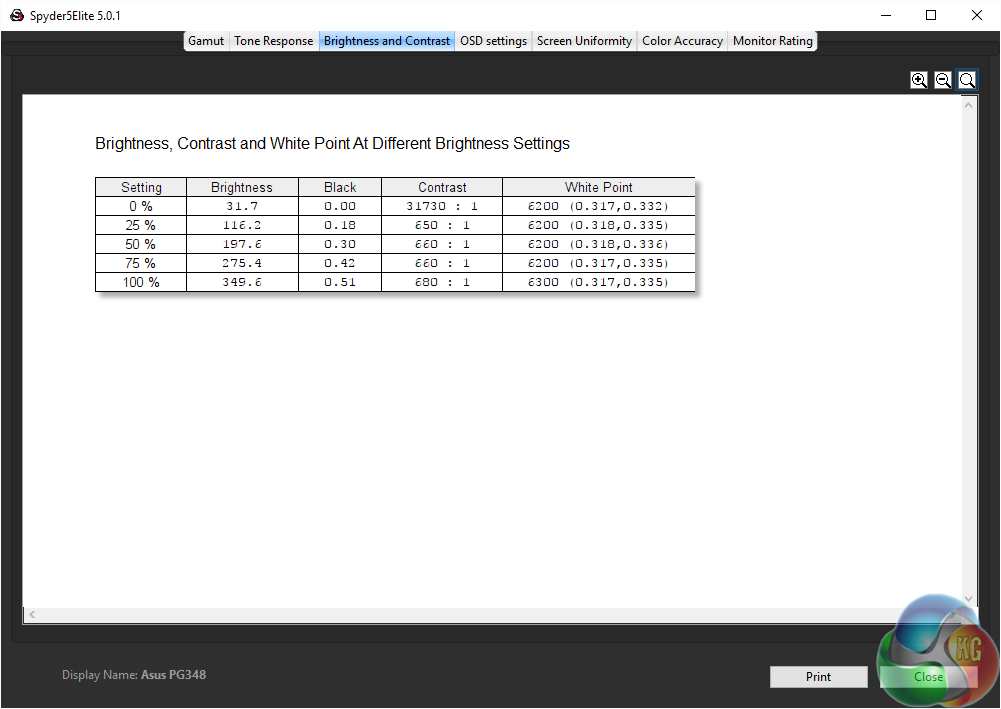 Brightness of almost 350 cd/m2 and contrast levels of 680:1 are good results, with a notable improvement in brightness over the PG27AQ.

The white point is slightly off the 6500K target. 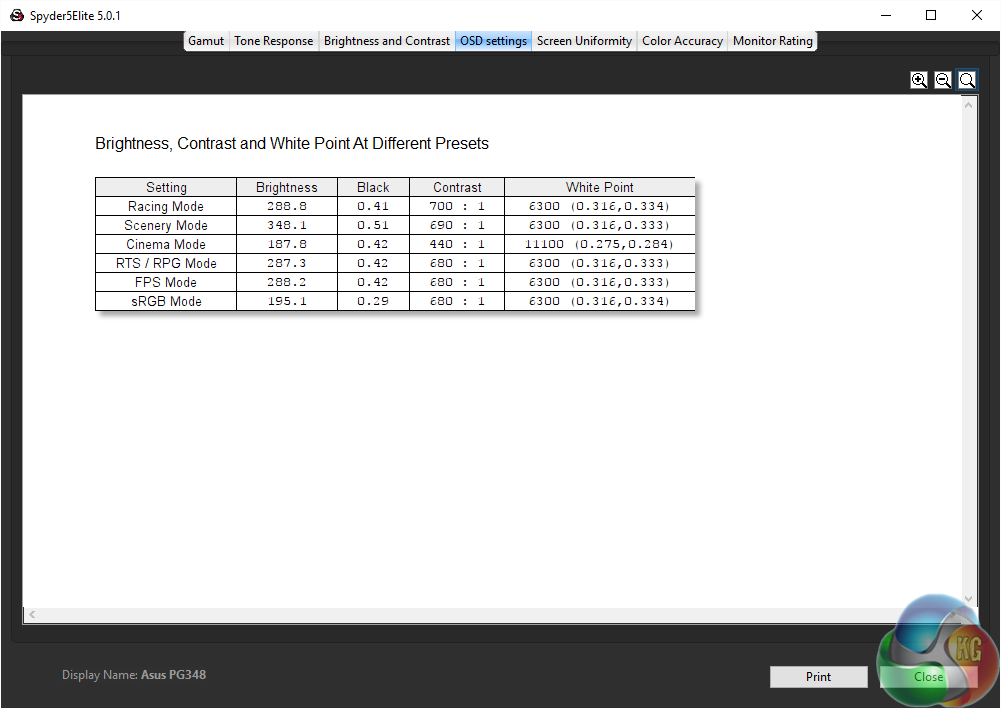 The presets in the Game Visual menu adjust the brightness and contrast levels, with sRGB mode just half as bright as the maximum setting. 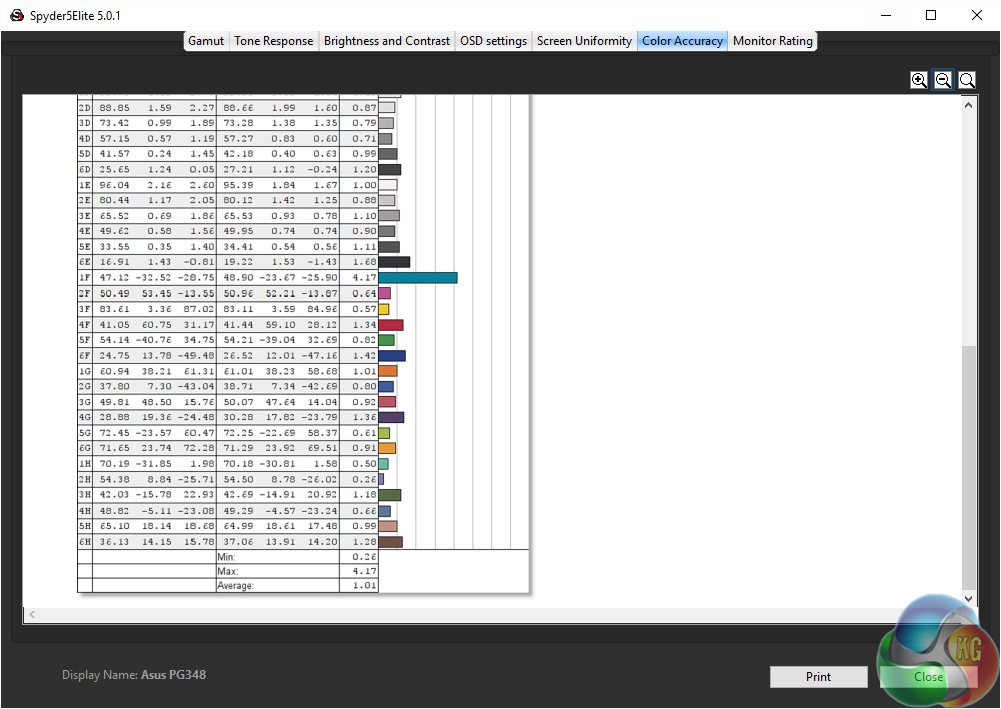 A Delta E of one shows superb colour accuracy, most likely due to the use of 10-bit colour processing.

After calibration, we noticed no visible change to the picture quality at all, and there were few differences in our results. Often calibration produces a noticeable shift in colour but the two images before and after the process were identical withe Asus ROG Swift PG348Q. 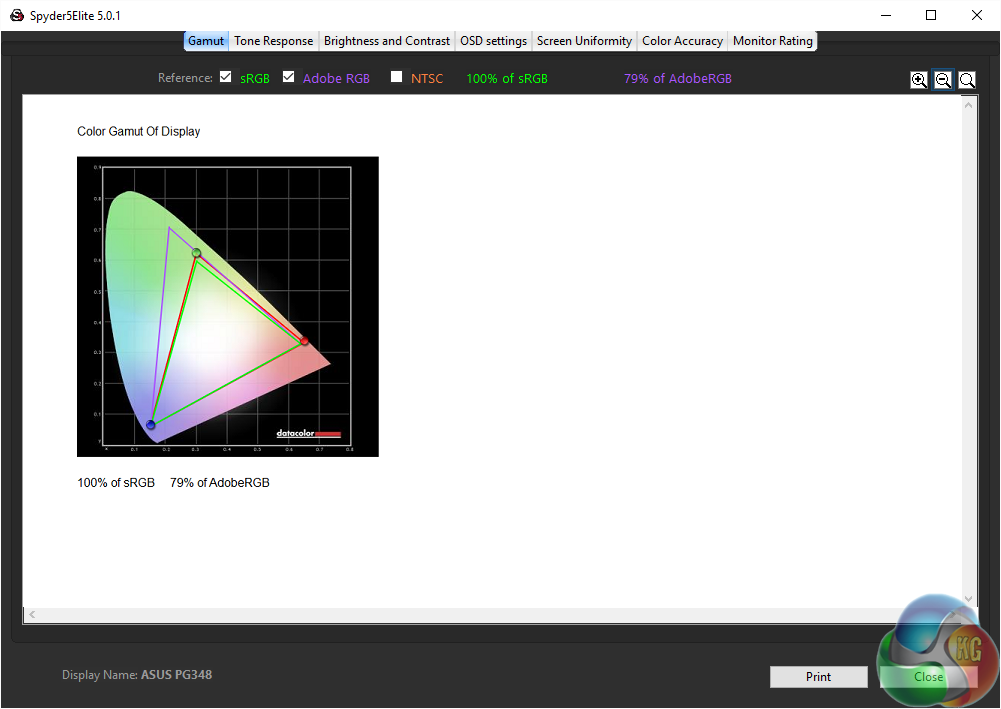 The same results for sRGB and Adobe RGB coverage. 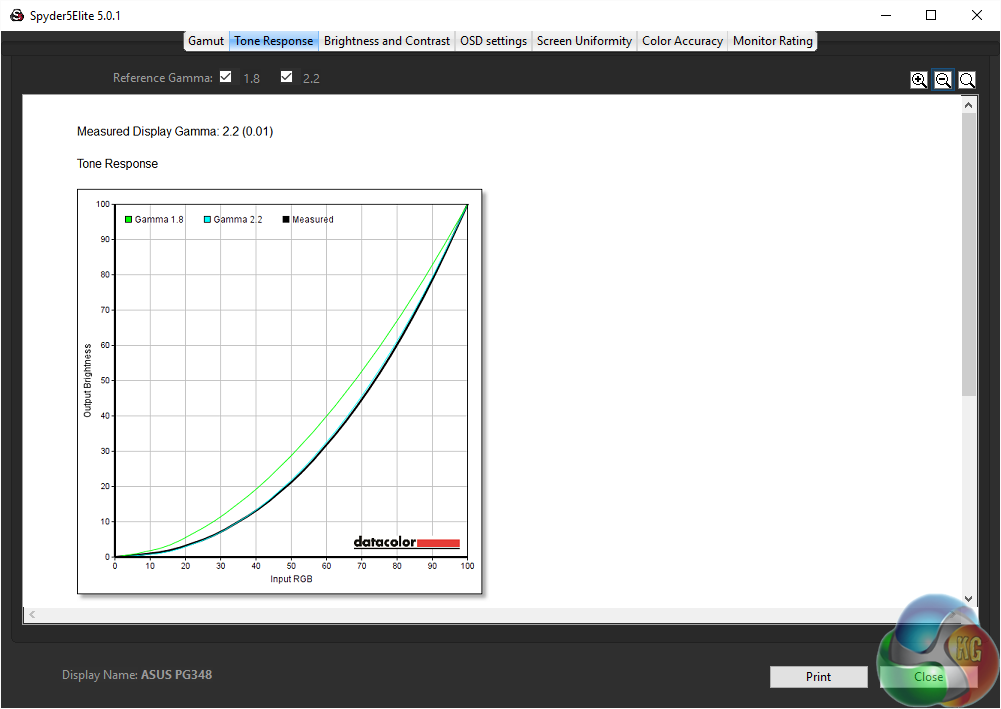 Calibration brings the gamma to exactly 2.2. 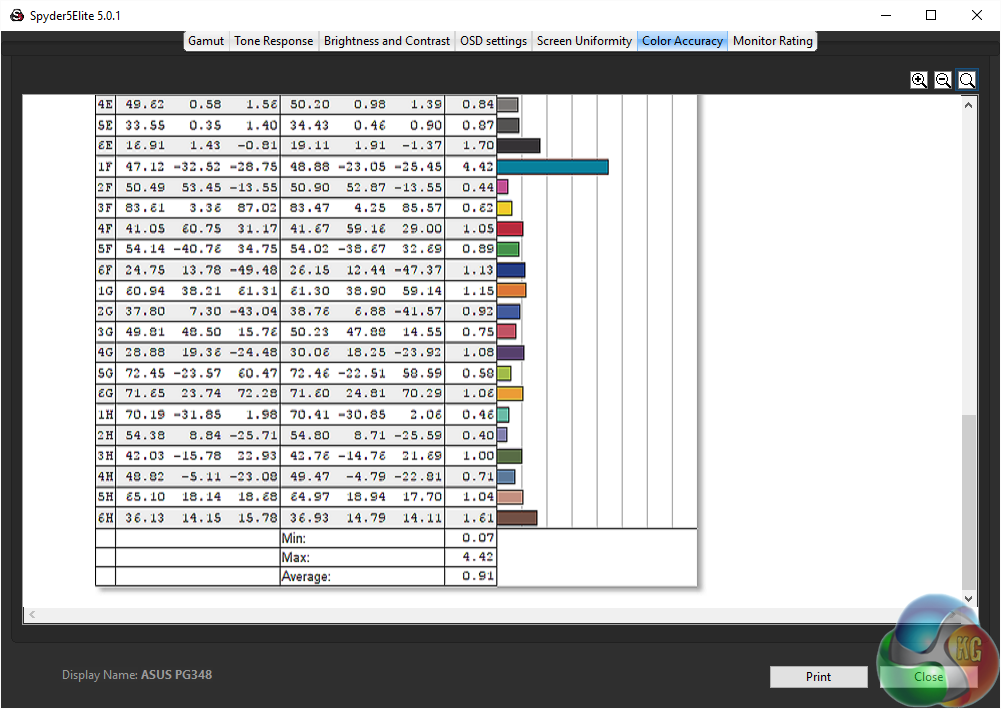 The colour accuracy slightly improves to a new figure below 1.0, but within the margin of error, so it’s generally unchanged, pointing to great out-of-the-box accuracy.

As always, we spent some time testing the Asus ROG Swift PG348Q in games, using Counterstrike: Source and Battlefield 4 with G-Sync enabled at the 100Hz setting. We’ve tried a range of displays at various refresh rates.

For anything above 60Hz, the effect is very noticeable. To our eyes, the gap between 60Hz and 100Hz is more noticeable than the difference between 100Hz and 144Hz. We think if you’re a gamer, these features are definitely worth having.