For many years Advanced Micro Devices earned its revenue by selling microprocessors and, more recently, graphics processing units and core-logic sets for personal computers. However, it became increasingly hard for AMD to maintain its revenue in the recent years due to tougher competition, shrinking PC market and inability to address high-end of the desktop and server markets with its central processing units. As a result, the company decided to change its strategy and shift its focus to different markets where competition is not that strong, but which present opportunities for AMD.

At some point AMD proclaimed a goal to increase the share of its non-PC business to around 50 percent of the corporate revenue. Apparently, the company is on-track to derive half of its sales from high-growth businesses by the end of 2015.

“Our next target point is by the time we get to the end of 2015 to have at least 50 per cent of our business coming from the non-PC, non-traditional, sector, and then we will see what happens after that,” said Devinder Kumar, chief financial officer of Advanced Micro Devices, during his presentation at the Credit Suisse 18th Annual Technology Conference. 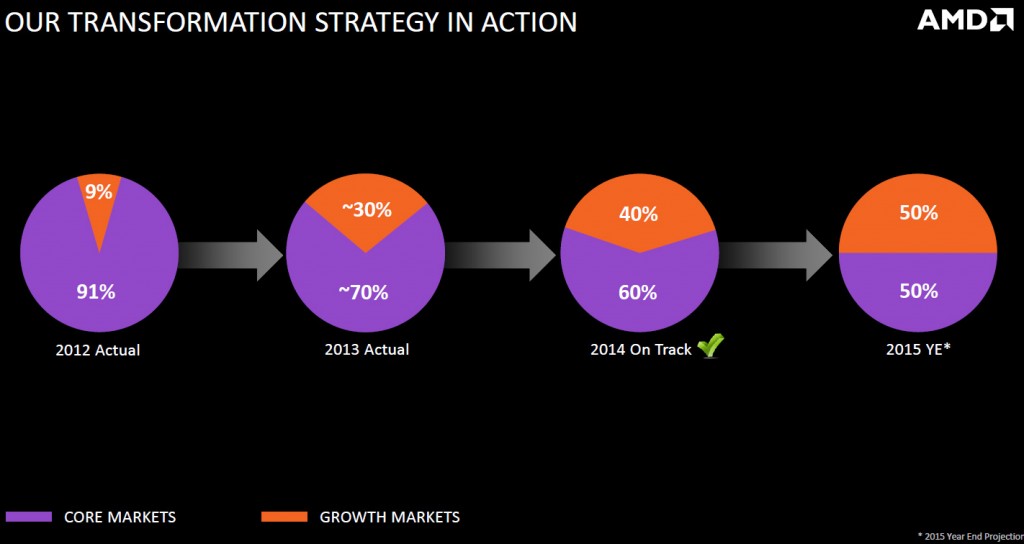 In the third quarter of fiscal 2014 the company earned $1.43 billion, of which $781 million (54.6 per cent) came from its computing and graphics (CG) segment business, whereas $648 million (45.4 per cent) came from its enterprise, embedded and semi-custom (EESC) system-on-chip business unit. Given that the EESC includes sales of Opteron processors for servers and the fact that Microsoft Corp. and Sony Corp. increase purchases of console chips in the Q3, it is likely that the share of non-PC products in AMD’s revenue should approach 40 per cent this year.

At present, semi-custom system-on-chips for Microsoft Xbox One as well as Sony PlayStation 4 game consoles account for a significant chunk of AMD’s EESC business. Back in October AMD announced two more semi-custom design wins, which will bring the company combined total lifetime revenue of approximately $1 billion over approximately three years starting 2016. According to AMD, these new semi-custom SoCs are not for game consoles or similar devices.

KitGuru Says: The main problem for AMD is not that it is increasing the share of the EESC business in its revenue, but the fact that sales of its microprocessors and graphics processors are dropping very fast (which is a reason why the share of EESC is growing). The company is on-track to report its third consecutive year-over-year revenue decline for FY2014 in early 2015.