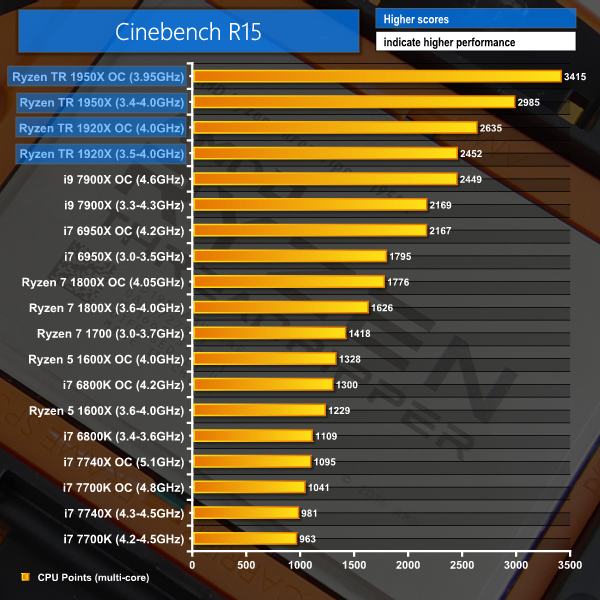 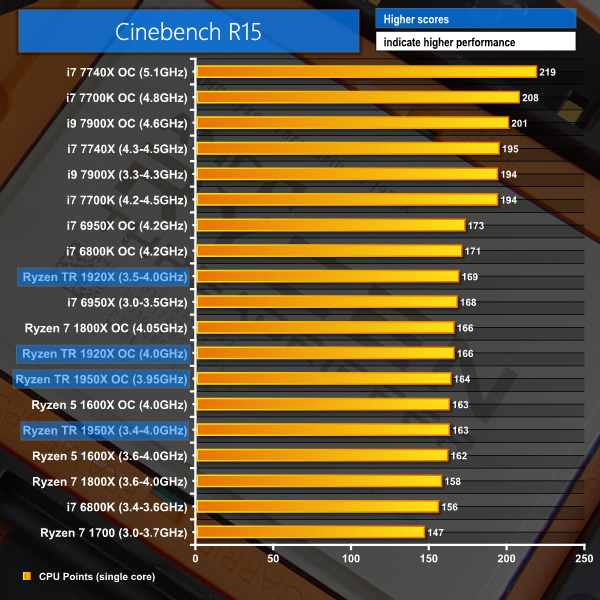 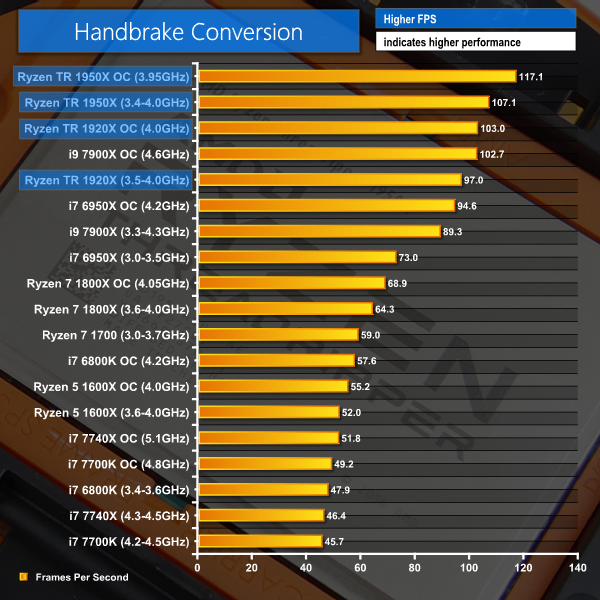 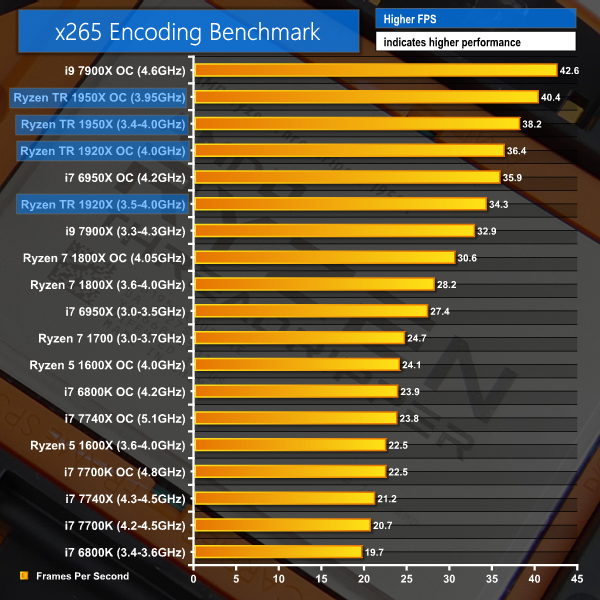 Both Threadripper chips make blazing starts in the Cinebench multi-threaded tests. Hitting around 3000 Cinebench points out of the box, the 1950X opens up a new level of rendering performance, based on the Cinebench numbers. Stock vs stock, AMD’s equally-priced 1950X is 37% faster than the i9-7900X. With both overclocked, the AMD chip’s lead is 39%. Even the $200 cheaper 1920X hands the $999 i9-7900X a beating by being 13% faster at stock and 7.6% faster with both overclocked.

Keeping the focus on Cinebench multithreaded, the performance scaling from AMD’s increase core count is near perfect. The 12C24T 3.7GHz all-core 1920X is 99.5% faster than the 6C12T 3.7GHz all-core Ryzen 5 1600X. A 99.5% performance uptick for a 100% increase in cores is pretty good indeed! Performance scaling from the Ryzen 7 1800X to the Ryzen Threadripper 1950X was not as close to 100% due to the 16-core chip reducing its all-core Precision Boost clock speed to around 3.475GHz under heavy load (likely due to TDP limitations).

Looking at Cinebench single-threaded performance, Intel’s higher-clocked parts with superior Skylake- or Kaby Lake-based microarchitecture are still the champs. Nothing from AMD can touch the single-threaded performance of Skylake-based chips. 4.2GHz XFR seems to be a little hit-or-miss with our Cinebench tests, as shown by the 1920X outperforming the 1950X (which shouldn’t be the case due to 4.2GHz XFR on both). Run-to-run variance with Cinebench also plays a role. 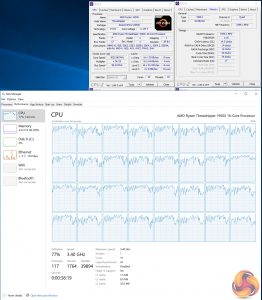 Moving on to Handbrake, the 1950X forces its way to another performance victory. In fact, the 12-core and 16-core chips have so much processing power and so many threads, our high-bitrate 4K conversion tasks was struggling to saturate all resources. Despite operating at around 80% overall usage, the 1950X still managed to outperform Intel’s i9-7900X by 20% stock vs stock and 14% OC vs OC. That’s with enough CPU horsepower spare on the 1950X to theoretically just about run Ghost Recon Wildlands at 4K at the same time, for example.

The 1920X sat closer to 100% CPU usage in Handbrake most of the time and in doing so, proved competitive against the more expensive i9-7900X.

Our x265 benchmark was another test that simply could not feed the sheer number of threads made available by the Ryzen Threadripper CPUs (and Intel 10-core chips by extension but to less of a degree). As such, the test showed increased preference for clock speed over thread count past a certain number. Intel’s Skylake-X i9-7900X was outperformed by the 1950X by 16% and by the 1920X by 4.3% for stock vs stock. However, a 4.6GHz clock speed netted the Intel flagship a performance lead of 5.4% against the 1950X and 17% compared to the 1920X with all CPUs overclocked.

Its 4.6GHz clock speed allow Intel’s Core i9-7900X to load all threads to around 90-100% when encoding. However, the 1950X’s 3.95GHz frequency meant that average CPU usage was around 60-75%. In this test, that makes Intel’s chip good for users who want all-out performance and AMD’s similarly-priced competitor a smart option for heavy multi-taskers.