The temperature of the Skylake CPUs and power consumption of our entire test system (at the wall) is measured while loading only the CPU using Prime95′s in-place large FFTs setting.

Temperature recordings were taken using CPUID HWMonitor. Asus’ AI Suite 3 software delivered different readings that were sometimes more than 10°C lower than the CPUID software. This shows that CPUID and Asus software are reading from different sensor positions in the CPU area.

Temperature recordings were taken with the Corsair H100i CPU cooler’s fans running at full speed. Ambient temperature was maintained at a toasty 25°C. 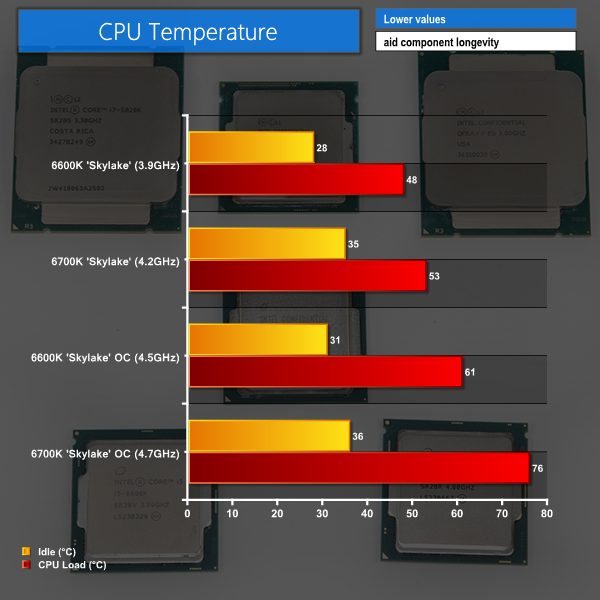 Thermal performance of the Skylake CPUs is generally positive, despite the heatspreader relying upon a TIM bond rather than solder. Stock-clocked voltage levels of 1.20-1.25V are straightforward to handle with modest CPU cooling hardware. That's very important because gamers on a budget want to invest the greatest amount possible in their GPU. After buying a Core i5 CPU, being permitted to save money by opting for a basic CPU cooler is deemed a clear positive.  Hyper-threading, increased clock speed, and a greater serving of cache force higher temperatures on the Core i7 SKU, although this is nothing new.

It is worth pointing out that Intel does not supply the 6700K and 6600K CPUs with a stock CPU cooler. The cost of an after-market CPU cooler must be factored in, although that is very rarely an issue for consumers buying a multiplier-unlocked, overclocking CPU. Something like the legendary £25 Cooler Master Hyper 212 EVO is a good choice, although Raijintek also have some good low-cost offerings.

I am happy to admit my surprise by the capacity of Intel's Skylake chips to handle significantly higher voltage levels than recent CPU generations. Both the i5-6600K and i7-6700K were happy to receive 1.40V and run at full – Prime95 and AIDA64 Stability Test – load while maintaining sub-90°C temperatures. And that was using a Noctua NH-D14 CPU cooler – the Corsair H100i shaved another 5-10°C off the near-90°C 1.40V load temperatures. Just over 60°C for a fully-loaded i5-6600K running at 4.5GHz with 1.35V being fed speaks volumes for CPU temperature capacity. And it opens up headroom for solid overclocking gains in SFF systems without forcing the CPU into a throttling state.

It's not necessarily all positive though. We spoke to 8Pack and he pointed out that Skylake's solid temperature performance with air and water cooling does not translate effectively to sub-zero liquid nitrogen testing. Although we haven't tested sub-zero cooling ourselves, it is possible that the TIM found under the heatspreader simply doesn't work very efficiently towards the extreme-end of sub-zero temperature levels. 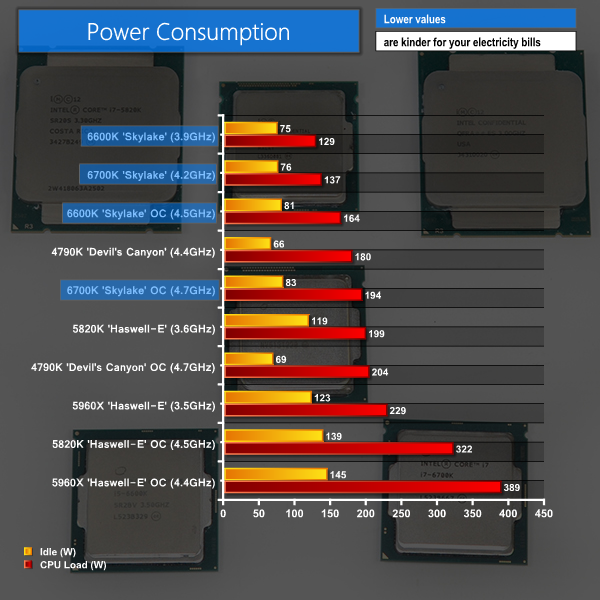 Power consumption is another positive showing for the Skylake CPUs. Despite the chips' higher – 91W TDP – power consumption levels are noticeably lower than those of a Devil's Canyon-based system, not to mention one featuring energy-hungry Haswell-E chips.

Although I cannot confirm the exact reasons, I would wager that the lower power consumption numbers, despite higher rated TDPs, are related to the greater emphasis placed on iGPU resources for the Skylake chips. If Intel's TDP rating factors in iGPU load, removing its functionality from the equation may translate into a CPU portion of the die that demands less power than 22nm Haswell-based chips thanks to its 14nm process node.

Our results factor in system-wide power consumption levels, so it is difficult to pinpoint the exact CPU power usage numbers. But the reduction in energy usage for a stock-clocked i7-6700K against the i7-4790K, as well as the lower power consumption for a 1.40V 6700K against the 1.30V 4790K, gives strong indication that Skylake is indeed a more energy-efficient architecture than Haswell was.

While a load energy usage reduction of little more than a light bulb is largely uninteresting when comparing the 6700K to the 4790K, there is more to power consumption levels than a quarterly bill may suggest. Low power consumption for the CPU translates directly into less heat being thrown into a chassis (or room). This directly affects the environment in which the CPUs can operate – SFF systems, for example, have a stronger chance of operating at full speed for extended time periods because there is less thermal energy to continuously remove from a miniature chassis. There's also the point for potentially reduced stress on VRM components and less stringent PSU requirements.