We have built a system inside a Lian Li chassis with no case fans and have used a fanless cooler on our CPU. The motherboard is also passively cooled. This gives us a build with almost completely passive cooling and it means we can measure noise of just the graphics card inside the system when we run looped 3dMark tests.

We measure from a distance of around 1 meter from the closed chassis and 4 foot from the ground to mirror a real world situation. Ambient noise in the room measures close to the limits of our sound meter at 28dBa. Why do this? Well this means we can eliminate secondary noise pollution in the test room and concentrate on only the video card. It also brings us slightly closer to industry standards, such as DIN 45635.

This review was delayed by some weird issues we were experiencing which seemed intermittent. Sometimes the target temperature of the Asus RX 480 Strix Gaming OC would switch from 75c to 65c and vice versa. We issued a report to ASUS on this problem and are waiting on feedback. I am also working on reviewing other RX 480 cards right now and we have since heard from Sapphire that the same problem occurs with their hardware. It would logically seem a Catalyst driver issue on some level (perhaps overriding the BIOS fan profile settings?) as Sapphire confirmed their target temperature settings should be 75c, not 65c.

All our results on this page are taken from the Asus RX 480 Strix Gaming OC running with a target temperature of 65c – which is the setting that we got most times on a reboot. This is obviously louder, and cooler than a profile set 10c higher as the fans have to work harder. 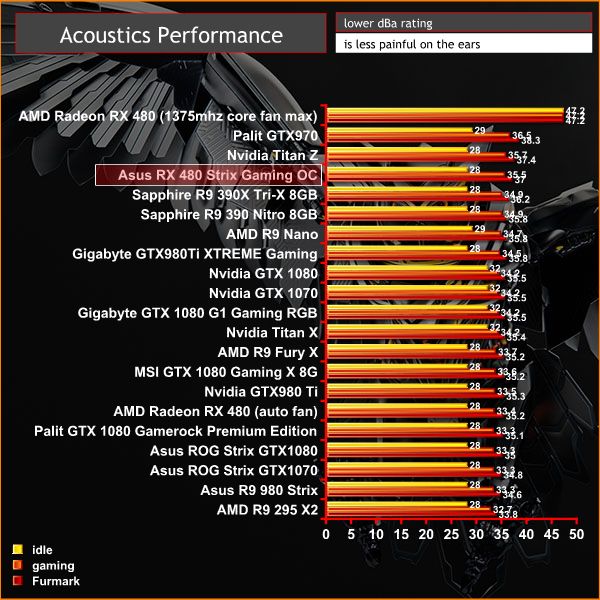 At idle, or under low load the fans disable – when the temperature reaches 53c they start to activate.