MSI includes a basic bundle with the B550 Tomahawk. You get a couple of SATA cables, screws for the M.2 slots, a case sticker, and the usual documentation. 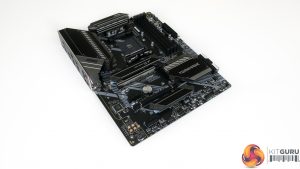 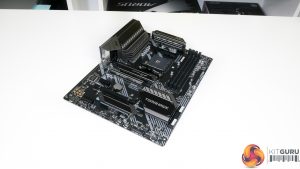 The MSI B550 Tomahawk follows MSI’s usual styling for this SKU. A large swathe of black, dark grey, and silvers form the colour scheme and there are no real contrasting elements. I personally like the board’s styling.

Most notable when looking at the motherboard are the sizable VRM heatsinks – one of which doubles up as the rear IO cover. 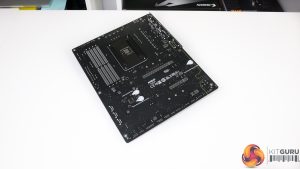 There is nothing fancy on the rear as MSI does not opt for a backplate. That is a good decision for keeping costs down.

The PCB is a 6-layer design, which is a positive sign of quality. 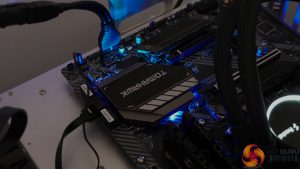 You get a subtle RGB glow from beneath the chipset heatsink. 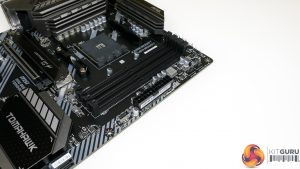 MSI’s QVL highlights support for a DDR4 memory kit as high as 5100MHz. The four DIMM slots can take up to 128GB of system memory.

I am very pleased to see MSI including an internal USB Type-C front panel header as many competing solutions around this price point omit the important connection. There is a caveat, however; MSI routes this port with a 5Gbps USB 3.0 link rather than the higher speed 10Gbps USB 3.2 Gen 2 alternative we are more used to.

Going for a 5Gbps USB connection is actually quite common at this price point and I am happy with decision. It is preferable to have the 10Gbps ports on the rear IO rather than the internal header when MSI is choosing between one or the other.

Four individual POST LEDs are useful for troubleshooting, but there is no 2-digit debug LED which is disappointing even at this price point. The lack of onboard power/reset/clear CMOS buttons is also slightly disappointing, but forgivable given the board’s pricing. 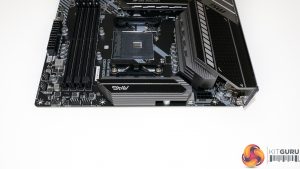 A single 8-pin CPU power connector is tucked away on the board’s corner thus making the cable easier to hide. We typically see 8+4-pin or 8+8-pin connectors on AM4 motherboards at this price point and above. However, I would be surprised if the single 8-pin on MSI’s B550 Tomahawk is inadequate for any of the current crop of Ryzen CPUs when overclocked sensibly.

A good set of fan headers are mounted in the top location but there is only a single RGB header – of the addressable variant – found in this region. 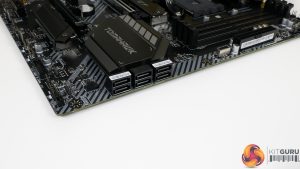 All six right-angled SATA connectors run directly from the B550 chipset. They do not share bandwidth with any other connections, making all six usable at any one time. 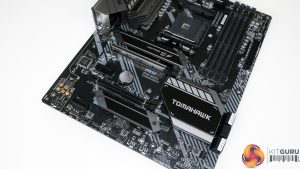 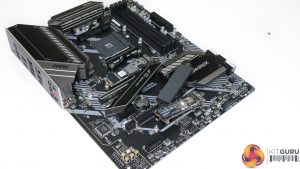 MSI outfits the B550 Tomahawk with dual M.2 slots, one of which supports drives up to 110mm long, with the other capable of housing 80mm variants as a maximum.

Both M.2 slots are afforded a metal strip heatsink with thermal pad. This is a positive as we often see motherboard vendors dropping down to a single M.2 heatsink to save a few pennies at this price point. 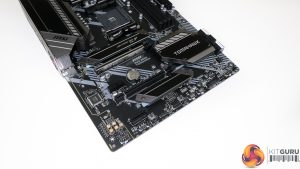 This is a bad PCIe layout design decision from MSI. It would have been far better for the PCIe or M.2 slots to share lanes with two of the SATA ports, as we see on competing solutions even at this price point.

If you want to install more than two M.2 SSDs alongside your graphics card, or if you’d like two M.2 SSDs plus a high-bandwidth capture card or similar, the MSI B550 Tomahawk cannot do that. MSI’s design decisions were poor and competing motherboards at this price point have better alternative lane allocation approaches. 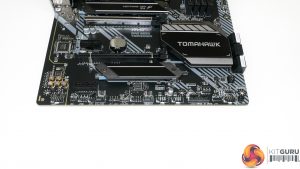 Dual USB 2.0 headers are found on the board’s bottom edge. This is ideal for users with smart AIO coolers in addition to RGB controllers and card readers or the likes. You get a single USB 3.0 5Gbps internal header front panel duties.

And a couple more 4-pin fan headers, as well as three RGB headers, are provided in addition to the usual interfaces. 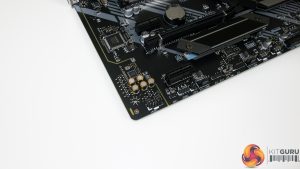 MSI’s audio system is built around the Realtek ALC1200 audio codec, rather than the higher-end, more common ALC1220 that we typically see deployed. Nippon Chemicon audio capacitors are used, in addition to dedicated PCB tracks. 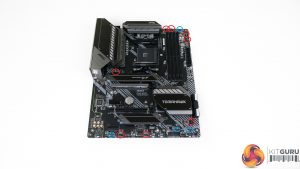 Eight total 4-pin fan headers are provided with the B550 Tomahawk. This is a superb number for any motherboard, never mind one at this price point. The distribution of fan headers is also very good, with five being within easy reach of the CPU socket, and three in the board’s lower quadrant.

It is also slightly disappointing to see that some of the headers are not positioned directly on the edge of the motherboard. This is most notable with two of the lower RGB headers and will force users to trail cables over a small amount of PCB, rather than tuck them through chassis grommets with minimal untidiness on display. 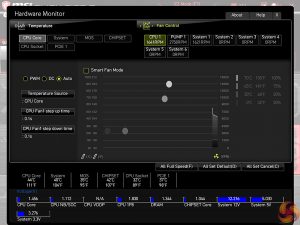 MSI deserves credit for implementing a strong fan control solution through the UEFI. You get the ability to control fan speeds via a 4-point curve, and it is positive to note that the 0 RPM speed mode generally works.

The speed hysteresis settings and ability to drive curves from different temperature sensor data also deserves credit and will please many users. 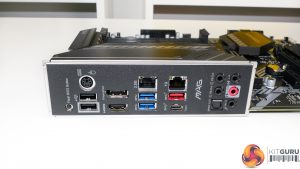 Dual USB 2.0 ports are installed on the rear IO, one of which is also allocated BIOS Flashback duties. MSI includes a PS/2 keyboard/mouse port which, in today’s market, is rather pointless in my opinion and would be better replaced with a couple more USB 2.0 ports.

You also get a couple of 5Gbps USB 3.0 Type-A ports and two 10Gbps USB 3.2 Gen 2 ports fed by the AMD CPU, one of which is Type-C. I would have liked to see more Type-A USB ports as a total of five will be inadequate for some users and there is plenty of bandwidth and rear IO spacing spare.

MSI bolsters the usual 1Gb Ethernet connection, which uses a Realtek RTL8111H controller, by adding a Realtek RTL8125B-powered 2.5 Gigabit LAN port. This is good to see as 2.5GbE is becoming commonplace on B550 offerings. Dual NICs will also appeal to some users who may run a direct 2.5GbE connection to their NAS or server whilst using the 1GbE connection for all other internet and network traffic.

The usual set of audio connectors, including SPDIF optical is used. A rear clear CMOS button is missed, but this is somewhat forgivable at this price point.

MSI deploys a 4K60-capable DisplayPort connection for use with Ryzen APUs. Unfortunately, the HDMI port only seems to be version 1.4b as MSI repeatedly advertises its 4K resolution support at below 60Hz (24Hz or 30Hz). This is highly disappointing and really is completely unacceptable on a B550 motherboard of this calibre and at this price point. The future Zen 2-based APUs are looking to be compelling options (hopefully), so it is not unreasonable to think that a B550 Tomahawk buyer will want to run a 4K60 connection to their TV or monitor from their APU. Unfortunately, they cannot officially do that without HDMI 2.0 support.

As a note, this is the first B550 motherboard that I have seen to not offer a 4K60-capable HDMI 2.0 port. Very disappointing, and completely unnecessary from MSI! 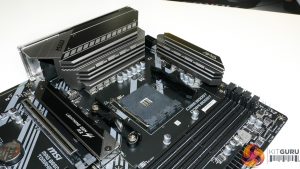 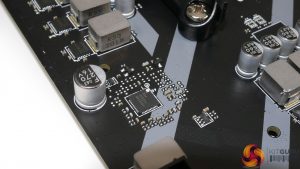 The PWM controller used is a Renesas 229004. As MSI does not use phase doublers, the PWM controller is operating in 5+2 phase control mode. This highlights that MSI is using a teamed/parallel power stage design whereby one PWM control phase handles two physical power stages. This is a common solution in today’s motherboard market that we see deployed regularly on ASUS motherboards in particular. 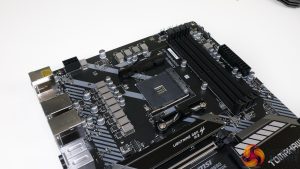 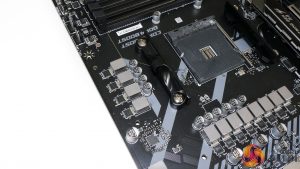 In terms of raw hardware, MSI’s B550 Tomahawk looks to have a capable and robust power delivery solution for AM4. We are not expecting any power delivery concerns with the Renesas/Intersil hardware. 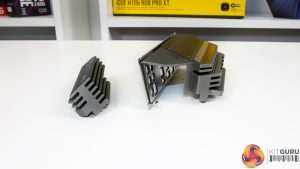 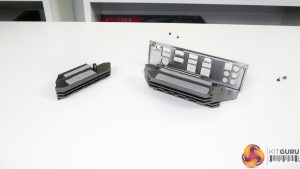 The large left-side VRM heatsink doubles as the rear IO cover in order to increase its bulk. This is a net positive from a cooling perspective. The heatsink design is certainly not very efficient as there is very little effort to fin the structure and drastically increase its surface area. However, the sheer bulk and mass of the metal heatsink, combined with the quality power stages deployed, means that it is likely to be a well-cooled implementation.

The upper VRM heatsink is also not particularly optimised as far as heatsink design goes. It is also not connected to the large VRM block via heatpipe, so must handle its cooling duties on its own. MSI makes a smart design move, however, by deploying only two of the CPU’s ten power stages beneath the smaller MOSFET heatsink (plus two of the less-stressed SoC power stages). This means that the smaller top VRM heatsink will be expected to handle a far smaller thermal load. I like this simple design tweak by MSI and consider it to be smart.

Another minor design point that is good to see if the use of a thermal pad to contact the chokes. Realistically, the chokes do not need to be cooled by the VRM heatsink. But there is no harm in connecting them with the large blocks of metal to provide some additional cooling capacity, if required. 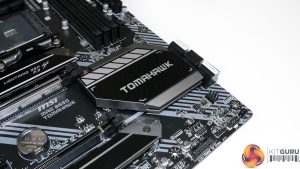 The chipset heatsink is a simple block of metal that is styled for aesthetic benefits. As the B550 chipset does not need a sizable amount of cooling, this design looks to be perfectly adequate.

Another task of the chipset heatsink is to sit above the RGB LEDs mounted directly beneath.