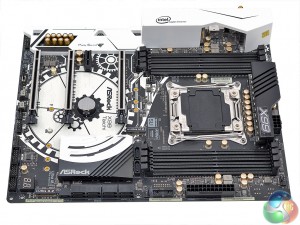 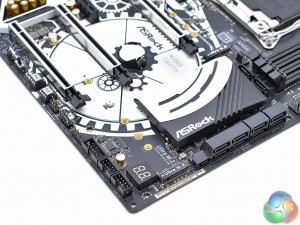 Styling with the X99 Taichi is bold and certainly unique in comparison to a market saturated by gaming X99 motherboards. The theme of machinery and cogs we observed on the packaging translates directly onto the motherboard which has a white printed overlay in the lower section of the motherboard. Cleverly, ASRock integrates the CMOS battery into this design to make it appear as part of the style.

The white and black theme carries onto the rear I/O which has a glossy white plastic shield that extends to cover the isolated audio PCB and a few other components, notably some of the network and USB controller chips. The gold audio capacitors receive their own special cut-out which makes for a unique look. ASRock has always made prominent the gold-coloured components on its motherboards and the X99 Taichi is no exception to that trend. 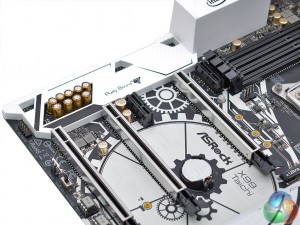 PCI Express connectivity is identical to the ASRock Fatal1ty X99 Professional Gaming i7 with three full sized PCI Express Generation 3.0 slots that will operate at different speeds depending on the CPU used. The first slot is 16X electrically wired, so too is the second slot while the third is 8X wired. The actual electrical configuration will depend on the number of PCIe lanes utilised, connection of other devices and the CPU used.

Audio is covered by the Realtek ALC1150 codec which is shielded as part of the ASRock Purity Sound 3 implementation. To support the main codec ASRock has included a Texas Instruments NE5532 headset amplifier for up to 600 ohm headsets and a number of Nichicon Fine Gold Series audio capacitors. All of the audio components, including the Front Panel connector, sit on an isolated PCB section to reduce noise and electrical interference. 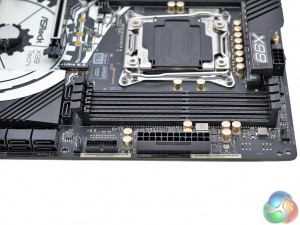 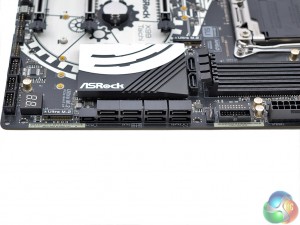 Running along the side of the motherboard there's a typical layout with the 24 pin and USB 3.0 headers sitting directly next to each other. In terms of storage only 8 SATA ports, and the SATA Express, sit right-angled to the edge of the motherboard with the other two SATA ports awkwardly shoehorned between the chipset heatsink and first array of DDR4 slots.

Towards the lower corner of the motherboard a debug LED is found next to one of the two M.2 ports. There are no onboard power or reset buttons which seems to be one of the limitations of the X99 Taichi. 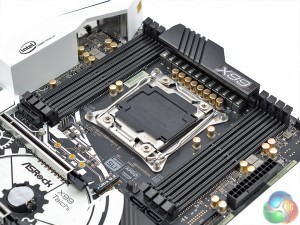 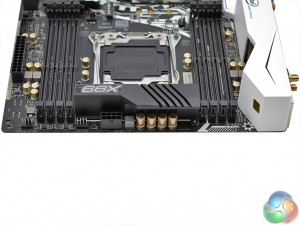 The CPU socket has a 12 phase hybrid-digital “Digi power” VRM solution and draws in power from a single CPU EPS 8 pin connection.

Capacitors in proximity to the CPU socket are ASRock’s gold-coloured 12,000-hour (12k) rated units while the chokes supporting power delivery are rated for up to 60 amps of power induction and dual n-channel PowerTrench packages are deployed. 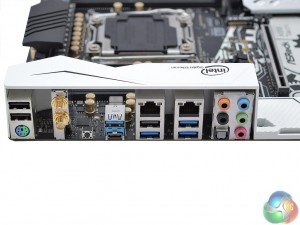 Rear I/O connectivity is one of the primary areas of variance between the ASRock X99 Taichi and Fatal1ty Professional Gaming i7 as there are less USB 3.0 ports and more USB 2.0.

On the rear I/O of the Taichi you will find the following: 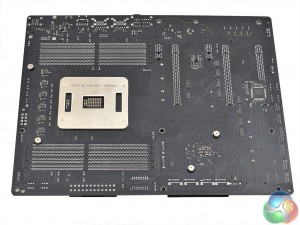 Underneath the ASRock Taichi all the securing screws are Philips-type in varying sizes so maintenance and modification of the motherboard is simple – no plastic pushpins or rivets. There are no additional supporting backplates or braces to aid heat dissipation from the CPU power delivery components or provide additional rigidity.