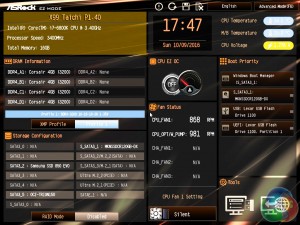 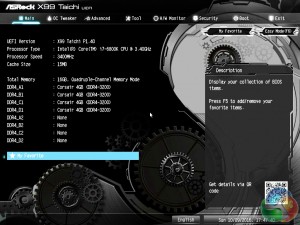 ASRock has skinned a new version of its X99 UEFI for the X99 Taichi though at a fundamental level it is identical to many other current ASRock X99 motherboards.

The UEFI environment begins with an “EZ Mode” splashscreen page where the most frequently accessed options are made available: boot order, XMP, auto overclocking, CPU fan profiles, a UEFI update shortcut and a number of data monitoring streams. F6 will take you into the Advanced BIOS mode which encompasses the more granular adjustment options. 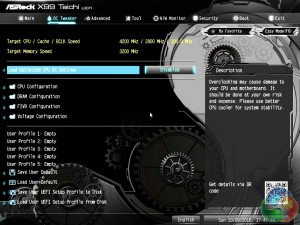 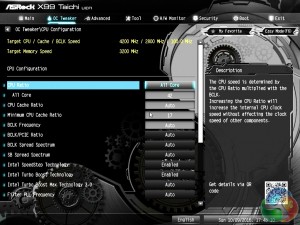 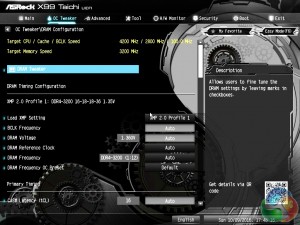 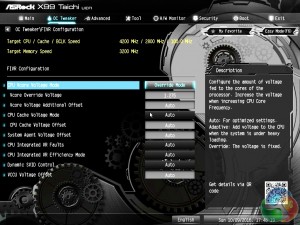 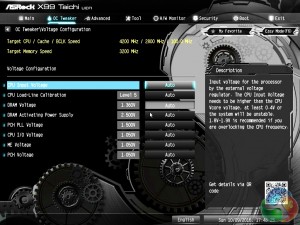 ASRock’s primary performance tuning and overclocking options fall under OC Tweaker, the tab with the most menus, sub-menus and other nested options.

Within OC Tweaker, a full complement of adjustments can be made to all the frequencies, voltages and parameters surrounding the CPU and DRAM as well as some Chipset-related items.

Less confident users can simply select from a range of pre-configured overclock profiles and see if they work, but some experience will be required to make sure an overclock profile runs within safe power and temperature parameters.

Handily, UEFI profiles can be loaded from external sources, saved and exported, making it easy to pick up other OC profiles from online forums and other community users. 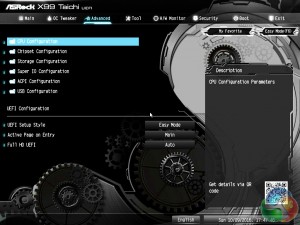 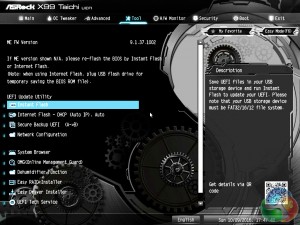 There are additional CPU and chipset parameters available in the Advanced section but these pertain more to compatibility and functionality, rather than performance. Users experiencing compatibility problems with USB devices or M.2 drives, for example, can toggle xHCI settings and M.2 initialisation options in this section.

Under the Tool section ASRock has a range of pre-packaged utilities within the UEFI, think of them like “apps” for the BIOS. The most frequently used of which will be the Instant Flash BIOS update utility, or the internet-connected variant Internet Flash which will download, prepare and install the latest UEFI for you with minimal intervention. 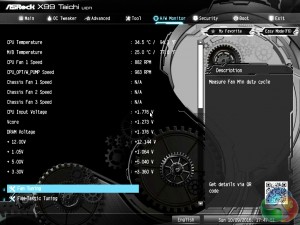 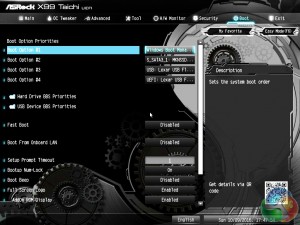 H/W Monitor provides ASRock’s full range of temperature and voltage read-outs, the fan tuning utilities are also found here. Since the fan adjustments occur in real-time adjustments you can make changes and hear the difference without needing to save & exit or reboot to make further adjustments.

The boot tab has a number of booting options related to compatibility and boot speed, as well as the device boot priorities and order priority for devices of the same type. 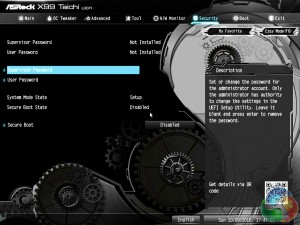 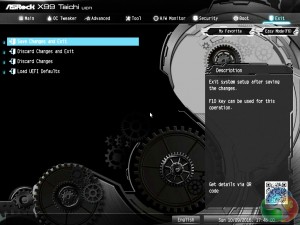 The Security tab allows secure boot or UEFI passwords to be implemented, the exit tab will allow you to discard or reset changes, load UEFI defaults and save and exit.