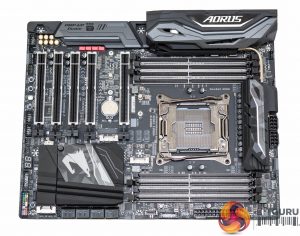 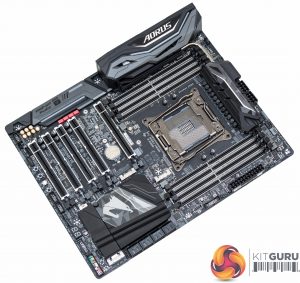 Gigabyte’s X299 Aorus Gaming 7 is another example of a previously quite distinctive motherboard vendor opting for a more subtle and subdued design. Gone are the days of green or orange, the Aorus Gaming 7 is for the most part colour neutral using black, grey, white and silver with enhancement from its RGB setup.

It’s an ATX motherboard so there’s no going E-ATX for the sake of it, but Gigabyte has gone to great lengths to pack additional features onto the motherboard and make good use of available real-estate. As most motherboard vendors have taken strides to spin-off their gaming segments as almost separate brands, Gigabyte continues to develop the “Aorus” entity with the prominent Aorus eagle on the chipset heatsink. 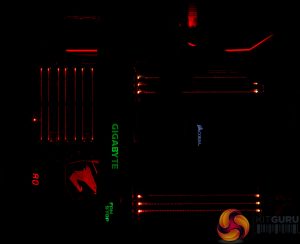 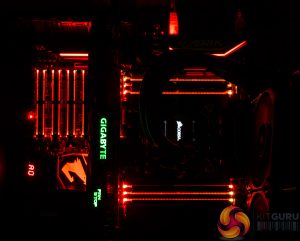 RGB lighting is spread across the motherboard – between all memory lanes, the PCIe slots, the chipset heatsink, the rear I/O shield and the audio area. This gives most users a great deal of tweakability, we’ll cover the RGB software in more detail in the software segment. There are not “standby” LEDs by default, though which can make it difficult to tell if the motherboard is on.

Running down the chipset-side of the motherboard there are plentiful fan headers , a USB 3.1 front panel connection, eight SATA III and a clear CMOS button.

Following around the bottom edge is an ample selection of buttons – ECO, OC, Reset and Power as well as more USB, a debug code reader and 12v G R B W header. The ECO button is a fairly new addition which Gigabyte describes, along with the OC button, as follows:

“GIGABYTE’s unique ECO button provides power-saving features by automatically reducing the overall power consumption according to current system load. The OC button helps enthusiasts and overclockers not only get the most performance from their hardware, but also the absolute most enjoyable OC experience.” 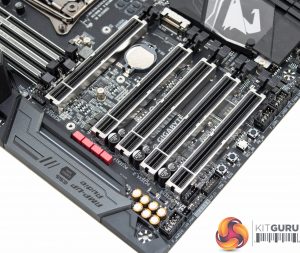 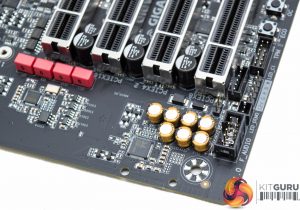 For the first time in a long while for a gaming motherboard we didn’t observe any trace of the long-lauded “isolated PCB” for Gigabyte’s audio section. Later on we’ll see what implications that has, if any, for audio performance.

PCIe connectivity is handled by five full physical size PCIe 3.0 X16 lanes. The actual electrical wiring from left to right (CPU socket to power/reset buttons) is X16/X4/X16/X4/X8 and the real operating link speeds depend on whether the CPU used is 16-, 28- or 44-lane capable. 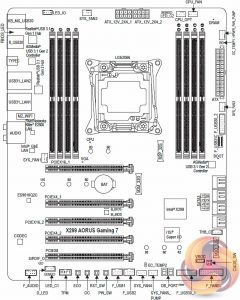 A more thorough and detailed overview of all the board’s components can be seen above. 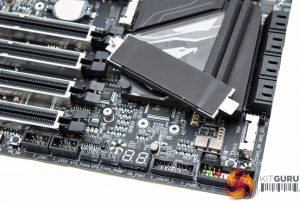 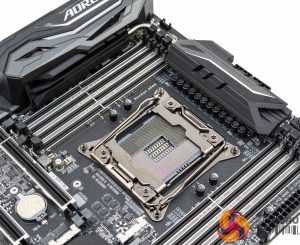 CPU power comes in through dual 8-pin EPS connections which are useful for heavy overclocking of Intel Core i9 units. CPU cooling duties are handled by two CPU fan headers, a water pump header plus a nearby system fan and second water pump header. The board does have a total of eight fan headers which is a very large number even by high-end motherboard standards. 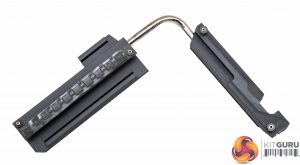 A real heat pipe based heatsink links the two CPU heatsinks together which should provide some added cooling capability to the CPU VRMs. The CPU appears to be powered by a 10-phase (8+1+1, VCore+VCCSA+IO) design and is linked to an Infineon IR35201 chip which can only drive up to 8 phases.

It seems the non-VCore phases around the memory and CPU socket are driven by the three IR 35204 controllers. In theory there is the capability to drive another 12 phases (three lots of 3+1) with those controllers but that number doesn’t appear to be fully utilised.

The 8 CPU VCore phases use one IR 3556M integrated PowIRstage 50 amp driver per phase. Some of the other minor phases are paired to slightly less powerful IR3553M PowIRstage 40 amp integrated drivers per phase. 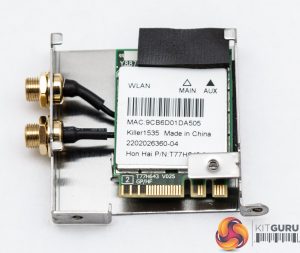 The I/O provided is as follows:

The WiFi is a Killer 1535 unit has two transmitters and two receivers (2T2R) operating at 802.11ac with MU-MIMO and Transmit Beamforming support.

Networking enthusiasts will appreciate the dual-Gigabit LAN solution too which has the best of both worlds – one Intel and one Killer. There’s no 5GbE or 10GbE at this price point but the market for these standards is still very niche. 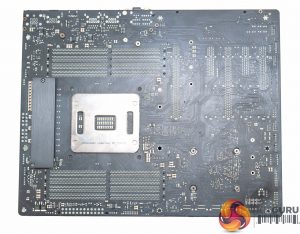 The underside of the PCB has a VRM reinforcement plate and uses only cross-head screws for easy maintenance and disassembly.