ASUS doesn’t attempt anything extraordinary with the Z170 Pro Gaming – the red and black colour scheme is tried and trusted in the PC DIY market. The design is relatively pleasing thanks to the predominantly black colour scheme with only slight hints of red, but it’s clear from a quick glance that this isn’t a Republic of Gamers board.

Subjectively, the board looks nice to us but it lacks the eye-catching finesse and sophistication of more expensive Republic of Gamers Z170 motherboards. Part of this could be due to the omission of a shroud near the rear I/O which is likely a cost saving measure, but when every penny counts it’s not something price-sensitive buyers will likely miss.

A quick glance under the motherboard reveals some of the additional cost-saving measures in use, the CPU heatsinks make use of a pushpin design rather than being screwed in and there are no reinforcing metal plates like are found on the Maximus VIII Hero and upwards. The chipset heatsink is screwed in but, in all fairness, the CPU heatsinks are well secured despite the pushpin design, build quality is surprisingly good given the price point. 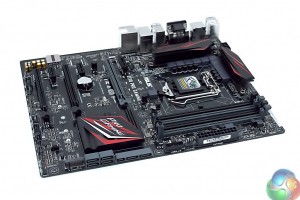 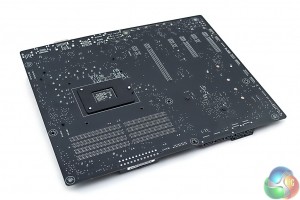 Taking a tour around the motherboard there are a few notable omissions in the top right, such as power buttons and an error code reader, but these are totally acceptable for the price point. ASUS still provides a debug LED system to help determine where the POST process is being interrupted from – at the CPU, RAM, GPU or storage devices. In terms of memory support ASUS quotes up to 64GB up to 3400MHz though faster kits will probably work if the CPU’s integrated memory controller is capable of handling it.

Around the CPU socket you will find a 10+1 phase Digital VRM for handling the CPU and iGPU, if used. All the notable VRM components are housed underneath the two CPU heatsinks that provide some heat dissipation capabilities, particularly useful if you’re likely to run a long-term overclock. 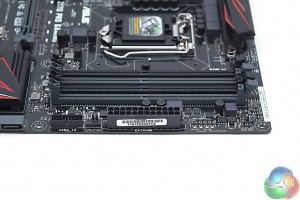 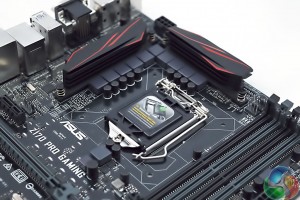 Along the lower section of the motherboard is where ASUS has chosen to fit the M.2 port, and M.2 drives up to 110mm are supported. The placement is optimal as it shouldn’t interfere with any PCIe devices neither does it displace anything else that would normally be expected in this section of the motherboard. User’s should note that when used in SATA mode, the M.2 port will deactivate SATA port 1.

The guts of the audio system, the Realtek ALC1150 codec, is installed on an isolated section of PCB and appropriately shielded in a SupremeFX branded casing. ASUS pairs the Realtek codec with Nichicon-brand capacitors and a 300 ohm headphone amplifier, which is impressive. Shrewd buyers should note that similarly priced motherboards from Gigabyte, like the Z170X-Gaming 3, do come with additional audio features such as swappable operational amplifiers and gain boost selector switches. 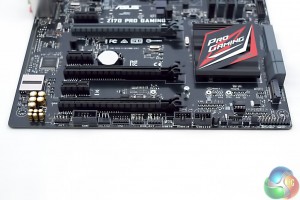 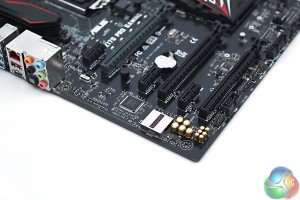 In terms of storage options the Z170 Pro Gaming is imbued with the default arrangement of the Z170 chipset. You’ll find six SATA III 6Gbps ports, of which two are shared with a SATA Express port, that’s in addition to the previously mentioned M.2 port. 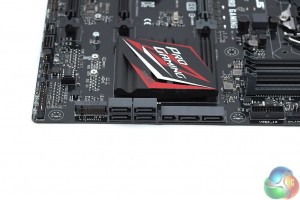 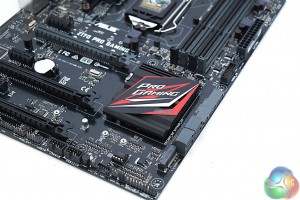 Around the rear I/O is where the Z170 Pro Gaming does slightly better than entry-level gaming motherboards from other vendors. 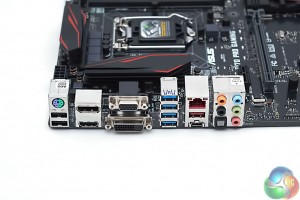 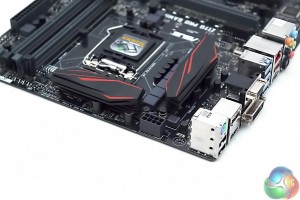 ASUS offers a plentiful stack including 4 USB 3.0 ports, 2 USB 2.0 ports, 2 USB 3.1 ports (one which is type C) and four display outputs of which the DisplayPort will be able to drive a 4K display using a Skylake iGPU. The legacy PS/2 combo port is also a nice touch for users who don’t want to let go of their old-school mouse or keyboard.