Similar to other vendors the ASUS UEFI launches into its “EZ Mode” which has a simplified dashboard containing the most common settings and information basic users would be likely to use. These things include enabling of an XMP profile, Intel Rapid Storage, the automated System Tuning utility, changing the boot order, as well as some fan speed and temperature information.

Using the ASUS UEFI we experienced no issues with a number of keyboards, mice and wireless peripherals, as well as a multitude of flash drives for reading BIOS files off and saving screenshots to. Compatibility problems with UEFI BIOSes seem to be an issue of the past. 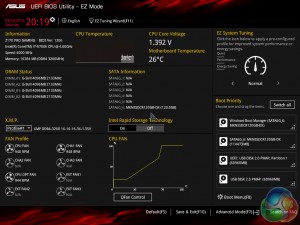 Pressing F7 takes the user into the advanced section which is the full unrestricted ASUS UEFI. Seasoned overclockers and tweakers will feel much more at home here with a full array of CPU, memory and general motherboard tweaking options.

The most common CPU and memory options such as voltages, frequencies and the like, are found under the AI Tweaker tab. Keen overclockers will be pleased to know that there are seven different levels of load line calibration to choose from with Level 1 being the least aggressive and Level 7 the most. 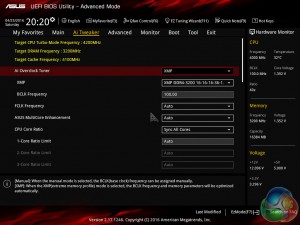 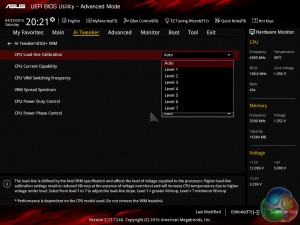 There are a number of utilities that launch in pop-up windows over the UEFI environment and these include the Q-Fan tuning utility and the EZ Flash update tool which will allow you to update the UEFI to the latest version through a downloaded file stored on a storage drive (USB or SATA) or through direct internet connection from the UEFI to the ASUS download server. 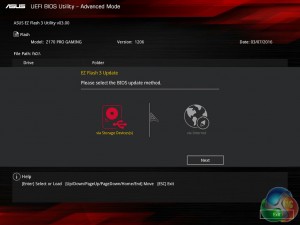 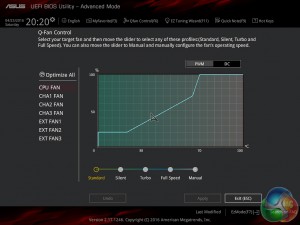 The level of granularity offered by the ASUS UEFI is impressive, especially since very little (if anything at all) has been cut out compared to higher-end Republic of Gamer’s offerings. To illustrate this point, there’s a section that lets you exercise individual USB port control, disabling USB ports you don’t intend to use. 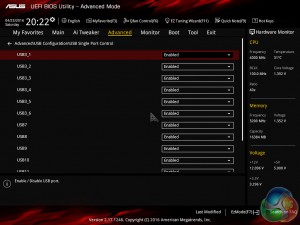 The advanced tab has all the other advanced tweaking and tuning options that aren’t CPU or memory related, anything related to the USB, networking or other storage controllers is likely to be found here. The monitoring tab is where you can see all temperatures and fan speeds, as well as set fan speeds and profiles. 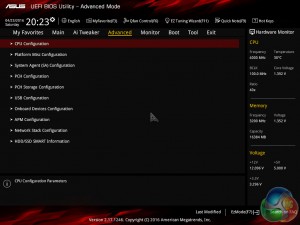 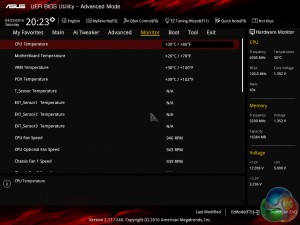 Interestingly, there is an optional temperature sensor header on the motherboard for any user who wants to take temperature readings at a location inside their system.