The last Plextor NVMe drive we looked at was one the of the M8 family using planer MLC NAND. The new M9 series of drives uses the latest Toshiba BiCS3 64-layer 3D TLC NAND but using the same Marvell 88SS1093 controller as the M8.

As before the drive comes in three formats, well technically two as there are two M.2 models, one with a heatsink, the M9Pe(G) and one without, the M9PeGN. The other drive is the HHHL (Half Height Half Length) M9Pe(Y). Capacity wise there are just three for all three versions of the M9; 256GB, 512GB and the flagship 1TB drives. 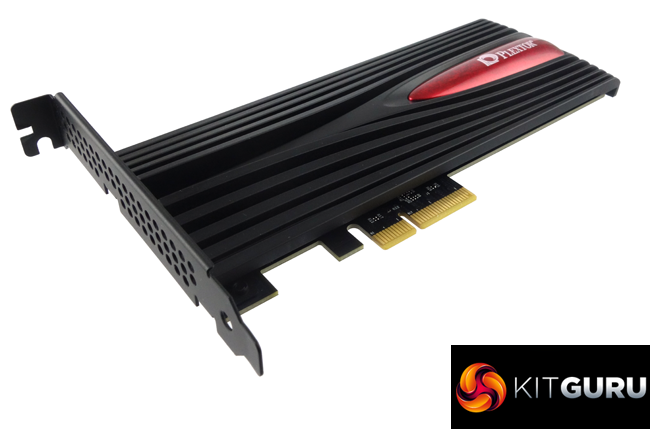 Using the ATTO benchmark we got close to Plextor’s maximum quoted Sequential read figure of 3,200MB/s at 3,154MB/s while the tested write result of 2,049MB/s was slightly better than the official figure of 2,000MB/s.

The quoted official Random 4K performance for the drive is up to 340,000 IOPS for reads and 280,000 IOPS for writes. With our test system we couldn’t get close to those numbers but reads of 196,045 IOPS at a queue depth of 32 and writes of 144,319 IOPS at the same QD are solid numbers for a mainstream drive.

RGB lighting for cases, fans, memory has been around for a while but now we have the first RGB SSD, yep a drive with a funky light show built in. Power up the M9Pe(Y) and it displays Red in a panel along the edge of the heatsink, and then when in standby it slowly cycles through its range of colours. Once the drive is actively reading or writing then you get the full RGB effect. It your’re not a fan of RGB then tough, because at the time this review was written there is no way of turning it off. Hopefully some kind of control for it will be built into a future version of Plextor’s Plextool management software.

Talking of the Plextool software, at the time of writing this review the utility doesn’t support the M9 series but that should change with the next refresh of the software.

Kitguru says: Plextor’s M9 series is a worthy successor to the previous generation M8 bringing 64-layer 3D TLC NAND to Plextor’s NVMe line-up. In addition the fact that it comes in two M.2 versions as well as the HHHL (Half Height Half Length) M9Pe(Y) makes it a very useful drive.