Just as with the Overclockers UK Germanium we looked at recently, the first thing to notice is the choice of case.

PC Specialist has opted for the Fractal Design Meshify C and its signature is an angular mesh on the front that allows for three big fans to pull in air. It’s functional but isn’t the most attractive, particularly once a PC has bright lights in it, as it does here. The lighting shines through the grill on the front, making a show of the lattice support structure, fans and brackets behind. 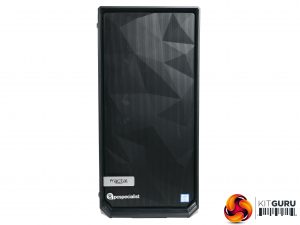 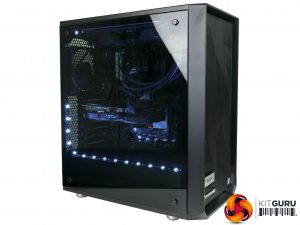 Elsewhere the case is fairly plain, with a normal steel panel on the back and no aluminium panels or other premium touches. The only thing you do get is a glass side panel that’s tinted to help hide some of the messy dark crevices of your build. PC Specialist has also added its own logo and an Intel logo to the front of the case.

So, it’s not the most striking case choice but that’s why it’s one of the cheaper glass-panelled options available. If you fancy something a bit different, it’s easy enough to change this.

PC Specialist hasn’t gone to town with the lighting in this build either, both in terms of additional lighting and components that include their own lighting. So there’s no RGB RAM, LED-equipped motherboard or flashing graphics card.

Instead, the only lighting you get comes from two strips of magnetically-attached white LEDs that frame the main chamber of the case. It certainly lights up the inside of the case – to a dazzling degree – but stylistically it’s a very token gesture, with the strip being clearly visible through the side of the case. 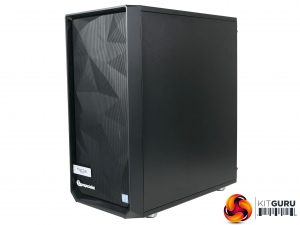 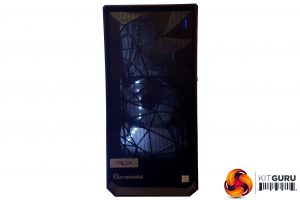 A slightly more tactical placement and a lower brightness setting would improve things a great deal, but that’s easy enough to do yourself.

Meanwhile, the overall build quality of the system is impressive. All the cables have been neatly routed and either tied up or hidden away. Round the back, in particular, it’s very neat making it easy to remove and replace the back panel – no bulging panels here.

Like most modern cases the Meshify C has a separate chamber for the PSU and hard drives, with space for two 3.5inch drives. SSDs and other 2.5inch drives are mounted behind the motherboard tray. 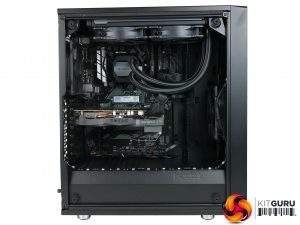 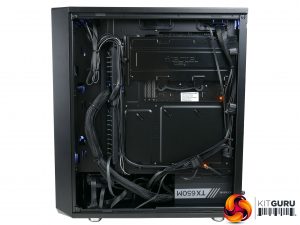 Meanwhile the PSU itself is a Corsair TX650M, which is a quality modular unit with plenty of power for a system like this.

A Corsair cooler has also been chosen for the CPU. The H100i V2 is an all-in-one liquid cooler with a 240mm radiator/fan that’s mounted in the top of the case. There’s also a 120mm fan in the front and one in the back.